Roberto Firmino scored his first goal of the season in Liverpool’s 2-1 win over Sheffield United at Anfield. Adam Bate looks at the challenge of assessing the form of a forward who is not judged on goals and why Diogo Jota's arrival could mean changes soon… Roberto Firmino went into Liverpool’s game against Sheffield United under scrutiny having scored only twice in his previous 26 appearances. The forward was waiting not only for his first Premier League goal at Anfield this season but his first shot on target.

Midway through the first half, with his team already a goal behind to the battling Blades, and having touched the ball only four times, the fewest of any player on the pitch, the Brazilian's famed 'unseen work' was proving harder to spot than ever before.

But then came the equaliser and with it the accompanying smile.

By the time that Firmino was withdrawn late on, he had not only had 44 touches of the ball, but one could also point to the fact that he had covered the most ground of anyone on the pitch, made the most sprints, and been clocked as his team's fastest player.

Isn't it always the way with Firmino?

When he is scoring goals and Liverpool are winning games, as they did here 2-1 in the end, it is time to celebrate everything else that comes with a Firmino performance.

When he is not finding the back of the net, as has happened too often for his liking over the past nine months, the calls for Jurgen Klopp to find another solution grow louder.

The Liverpool boss has made his feelings plain on the subject.

"For me, it is not even close to becoming a problem," said Klopp when asked recently about this goal drought. "These are the things where I have to be different to the outside world. For me, it is just important how influential the player is, how it works for the team.

"It was always clear when a player like Bobby, if he is not scoring and people start focusing on that then you realise that even he loses the ball from time to time."

It can feel like even discussing Firmino's flaws is tantamount to an admission of ignorance, an acknowledgement that the game's nuance and subtlety has been missed. Appreciating Firmino is an acquired taste but a taste worth acquiring. 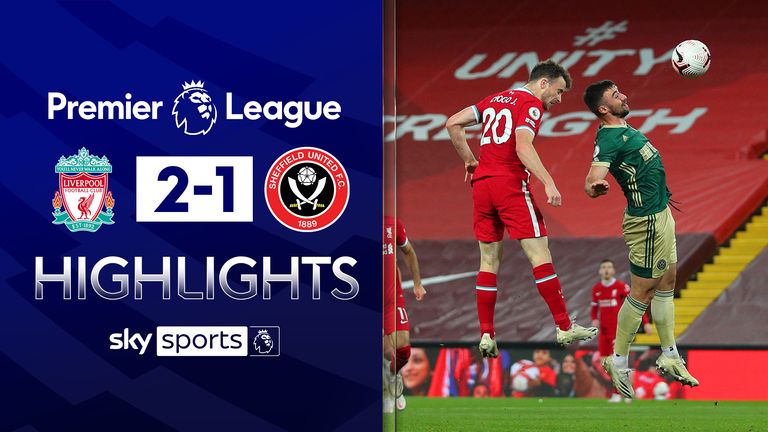 There is a certain logic to that given Liverpool's success. Any debate about one of their players should start from the endpoint and work back from there. This is a team that has been so brilliant that, by definition, everyone is contributing something crucial.

When scoring decisive goals in tricky away fixtures at Southampton, Chelsea, Crystal Palace, Tottenham or Wolves, as Firmino did last season, or netting that extra-time winner against Flamengo to help his team become world champions, that contribution is obvious.

When the goals stop - and Firmino's Premier League tally since February still stands at only two, the same as most of the back four, a trio of midfielders and September signing Diogo Jota - then it is necessary to look to other performance metrics.

After all, that is precisely what Klopp is doing.

"It's normal that you discuss it," he added.

What sort of things is Klopp thinking about instead?

Firmino's off-the-ball movement is a feature of Liverpool's game and it can be measured. He covered more ground than any other forward in the Premier League last season and not just because he featured in all 38 of Liverpool's matches in their title-winning campaign. Firmino's impressive running stats for Liverpool in the 2019/20 season

The statistics show that Firmino also spent the lowest percentage of time walking of any Premier League forward. It sums him up. He is perpetual motion, making life difficult for defenders, leading the press, and determining where and when Liverpool win the ball back.

Over the course of last season, Firmino was jogging for almost 90 minutes longer than any other Premier League forward and his total of 484 high-intensity sprints was the fourth most by any player regardless of position. His work rate typifies Klopp's Liverpool. 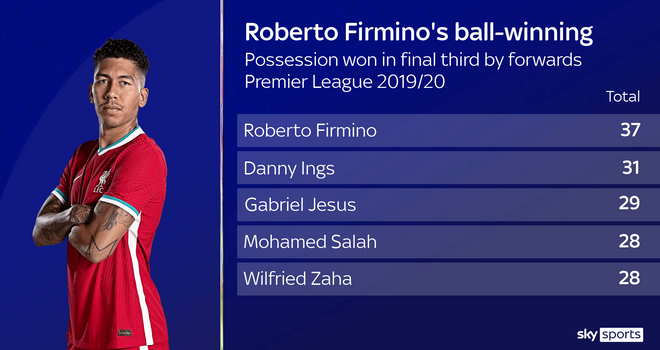 This is a team that won possession of the ball in the final third more times than any other last season and Firmino was directly responsible for that happening on 37 different occasions. Again, this was the most by any Premier League player. It sets him apart.

But the fact that much of this work by Firmino can go unseen and is harder to spot than a Mohamed Salah strike or an inch-perfect Andy Robertson cross has a logical consequence. It also follows that it should be harder to spot if a player stops doing that unseen work.

For example, if Salah's function in this Liverpool team is to score goals then it is fair to assume that if he stops taking those chances then he is no longer doing his job properly.

Firmino's form is trickier to assess because he has another role to play. But if he cannot be measured by goals or assists then can he still be measured by these more esoteric metrics?

Consider that statistic for the number of times that possession has been won in the final third - a list that Firmino topped last season. A very different picture is emerging this time around.

Firmino has won the ball back in that zone only once this season. Not only is he no longer top of the Premier League list but there are even ten Liverpool players who have won back possession in the final third more times. It is Sadio Mane who is leading the press now.

Against Sheffield United, this change was obvious with the inclusion of Jota seeing Firmino take on a deeper role in a 4-2-3-1 formation. It requires different qualities and during the early part of the match it was not only the opposition players who were struggling to pick him up - his own team-mates appeared to be bypassing him too. But as the game wore on his influence grew, drifting to the flanks, showing for throw-ins, and playing one lovely cushioned pass to Jordan Henderson that almost allowed the Liverpool captain to slide Mane through on goal. He appeared buoyed by the goal.

Klopp was certainly pleased with his new-look forward line.

"It gives us an extra option," he explained.

"It brought Mo in a different position, where I have to say he played an incredible game. Mo and Sadio didn't score but played outstanding. Sadio was in the one-on-one situations pretty much undefendable. Mo between the lines, sensational. And the other two boys scored and played good as well, so that helps obviously." 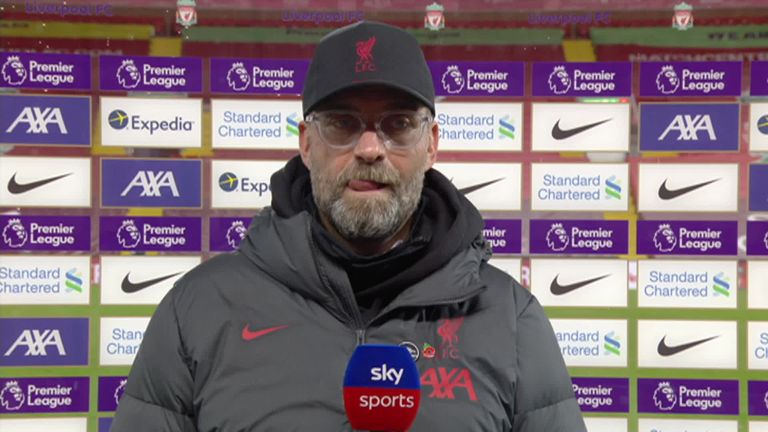 For once, then, Klopp found himself praising his two former golden boot winners, Salah and Mane, for their performances despite failing to find the net, while it was Firmino who delivered the goal.

Even so, the fact that Jota was also among the scorers presents an interesting decision for Klopp. The new arrival is showing that he can adapt and looks right at home in that front three. "He has exactly the quality we need," added the Liverpool boss.

Could Jota play the pressing game that Klopp demands alongside Salah and Mane, while also delivering a better goal return than Firmino? Or would Liverpool's attack suffer in unforeseen ways because of the intangibles that Firmino brings to the team?

Perhaps it is a question for another day while Klopp attempts to accommodate all four of them in the same team. For now, the focus is on a wait that has now ended. But expect the conundrum of evaluating the contribution of Roberto Firmino to continue.