Has Donny van de Beek shown enough to earn a starting spot at Manchester United? And where does he best fit into Ole Gunnar Solskjaer's side?

Despite struggling for playing time in the Premier League, Donny van de Beek started in United's midfield for the Champions League for the third straight game.

But though he has largely had to settle for being stand-in for Bruno Fernandes in a more attacking role, he was deployed alongside defensive midfielder Fred against Istanbul Basaksehir - and turned in a man-of-the-match performance.

"Some games I play No 10, sometimes the coach needs me in the control position," Van de Beek told MUTV after the game. "That's fine for me; sometimes in Ajax I was also playing in that position so it's okay."

"Donny is getting used to how we want him to play. He can play in different positions," Solskjaer added. 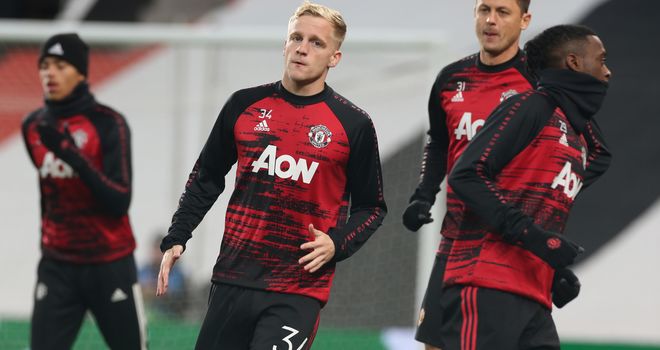 Donny van de Beek has had to bide his time

Van de Beek and his manager might have stressed his versatility but did a convincing performance in Europe show the way forward for the Dutchman in Manchester?

Let the No. 6 tussle commence?

United splashed £39m to prise the Dutch international from Ajax in the summer but few knew, and many guessed, where he would be deployed under Solskjaer.

Three months later, the answer appears to be nowhere or anywhere - but his performance as a No 6 in a two-man midfield against Istanbul Basaksehir laid down a marker for a regular starting berth in that deeper role.

United set out to attack and avenge the humiliating 2-1 defeat at the Turkish champions earlier this month, but Van de Beek and Fred held their positions with five team-mates pushing further upfield.

Fred patrolled a confined space and focussed on defensive duties, while Van de Beek produced a more box-to-box role - sweeping up close to his own box, providing forward momentum in central areas and carving opportunities in the attacking third. That coverage of distribution is clearly displayed in the pass map below, showing how he even created two chances from midway inside the opposition half in central areas. But with Bruno Fernandes a certain starter as the attacking midfielder in a 4-2-3-1, it looks like Van de Beek is up against Paul Pogba, alongside Fred, Nemanja Matic or Scott McTominay - all set to tussle for the No 6 starting berths.

Was this the moment Van de Beek kick-started career? "I have nothing against the kid but why have we bought Van de Beek? He's watching the game in the stand every game because we don't need him. It's the truth but people will not say it aloud."

That was the view of Patrice Evra as Van de Beek sat unused on the bench during Manchester United goalless draw with Chelsea at the end of last month.

The Dutchman is not the first nor will he be the last import needing time to adapt to the Premier League, but deploying him as part of a midfield two could be his role moving forward.

Alongside Fred, the summer arrival oozed class on the ball in midweek, his awareness and simplicity being at the fore of United's enterprising opening 45 minutes that had them 3-0 ahead against Istanbul Basaksehir.

Completing 56 of his 69 passes while creating two chances, Van de Beek wasn't restricted to defensive duties. His first thought was always to play the ball forward, and this was him reminding onlookers of his qualities.

This game will be remembered for Bruno Fernandes' cracking opener, but it could in time be seen as the moment in Van de Beek kick-started his United career.

Van de Beek showed class on the ball in midfield, and perhaps most importantly, an urgency that United have missed in attempting to move through the lines. Once again, the Dutchman proved that quality isn't the issue here.

In fact, Tuesday's game summed up the Van de Beek conundrum. He won't budge Fernandes out of the team anytime soon, so the only slot available becomes defensive midfield. On the ball, United improve with Van de Beek in the side, but against stronger opposition his inclusion would leave them more open without it.

It's a fine balancing act, and Solskjaer has shown little sign of wanting to swap in risk for solidity. Bruno Fernandes is the first name on the team-sheet for Manchester United and that takes one position out of the situation. Then you've got to decide, if you're going to play a midfield three and play two sitting - a Fred or a McTominay or a Matic - where does Van de Beek fit? And then you throw Pogba into there when you want to be more attacking.

Solskjaer is working out whether the system can trust having two creative players who can do those things, or whether you look at a strong platform, especially if Victor Lindelof doesn't make it because of a back injury. Security may be first and foremost, especially going away from Old Trafford.

I think Van de Beek did enough the other night to play for Manchester United in the Premier League but I can also see the counter-argument that you go to Southampton and you hope to get a point, you aim to get three points and maybe Van de Beek goes back to the bench because of that.