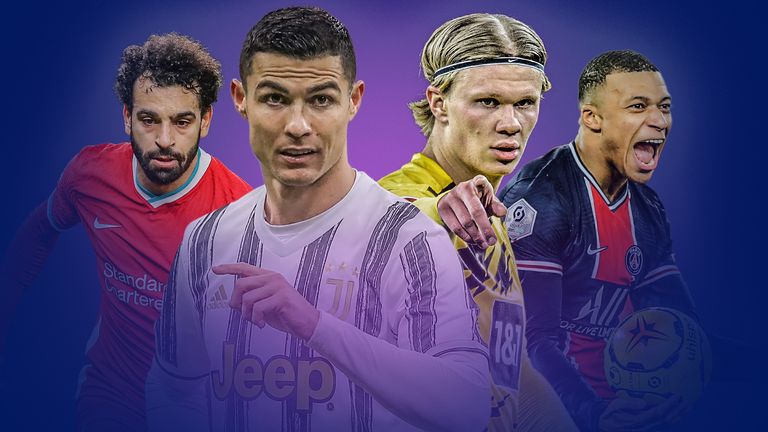 The races for the Golden Boot are heating up across Europe, but who is in contention?

A plethora of famous names are in the running for the topscorer plaudits across Europe's top five leagues.

Here, we run down the current frontrunners in each league and who has the best chance of winning the overall Golden Shoe...

Premier League - Will Salah or Kane make it three? 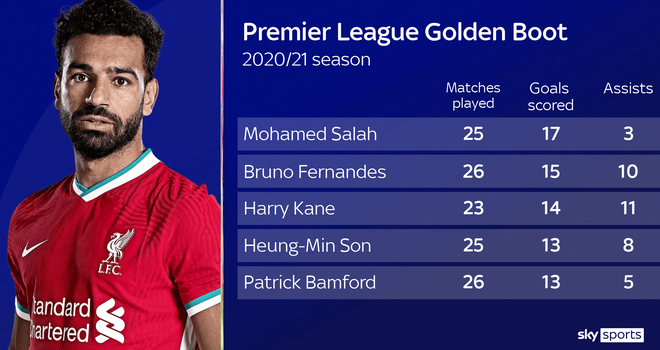 He is swiftly followed by Bruno Fernandes, who has featured in all 26 league matches for Manchester United this season, scoring 15 times. He also has a healthy ten assists under his belt. Another double Premier League Golden Boot winner, Harry Kane, makes up the top three with 14 goals in 23 Tottenham games, although he also has an impressive 11 assists.

There are four players tied for fourth place on 13 goals - Kane's Tottenham team-mate Heung-Min Son, Everton striker Dominic Calvert-Lewin and Leeds' Patrick Bamford. Calvert-Lewin has played in significantly fewer games (21), but is yet to register an assist in the Premier League this season. Son and Bamford have eight and five assists respectively.

Serie A - Ronaldo, Lukaku and Ibra in contention 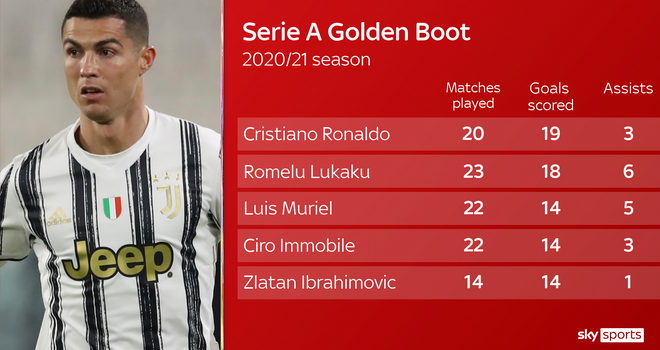 Unsurprisingly, Cristiano Ronaldo leads the way for Juventus, scoring 20 goals in 21 league games, notching up three assists. The Portuguese won the Premier League Golden Boot in the 2007/08 season and was La Liga's top scorer three times while at Real Madrid. He has also won the Golden Shoe four times.

But Inter Milan's Romelu Lukaku is hot on his heels, netting 18 times in 23 Serie A match this season and registering six assists. Two of these came in Sunday's win against Genoa to see Inter maintain their lead at the top of the table, also adding a goal in the 3-0 victory. 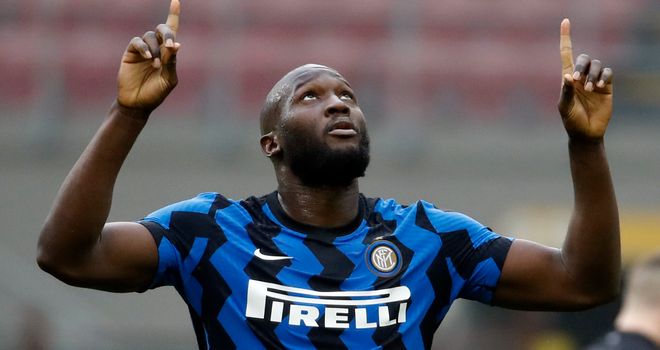 Romelu Lukaku has been in good form for Inter this season

Zlatan Ibrahimovic is tied for third place with Atalanta's Luis Muriel and Lazio's Immobile - who won the Serie A Golden Boot and Golden Shoe last season. All three have scored 14 league goals this term, but Ibrahimovic has done so in just 14 games, meaning he has a ratio of a goal per game as it stands.

However, this is likely to reduce further with the striker having picked up a thigh injury against Roma at the weekend. 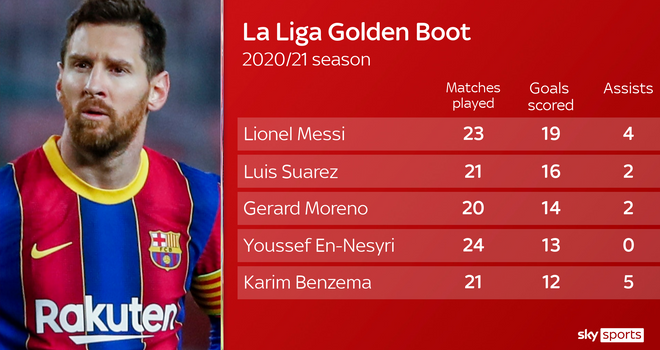 It's no surprise to see Lionel Messi at the top of the La Liga scoring charts once again, even with Barcelona's struggles this season. He has 19 goals and four assists in 23 games, aiming for his eighth Golden Boot. He has won the title in his last four La Liga season and is just six goals shy of his winning tally from last term.

He is followed by former Barcelona team-mate Luis Suarez, who has flourished since his summer move to Atletico Madrid. They are top of La Liga by two points, with Suarez scoring 16 goals in 21 appearances and registering two assists. He won the Premier League Golden Boot in the 2013/14 season and was La Liga's top scorer in the 2015/16 campaign. He also won the Golden Shoe in both years too. 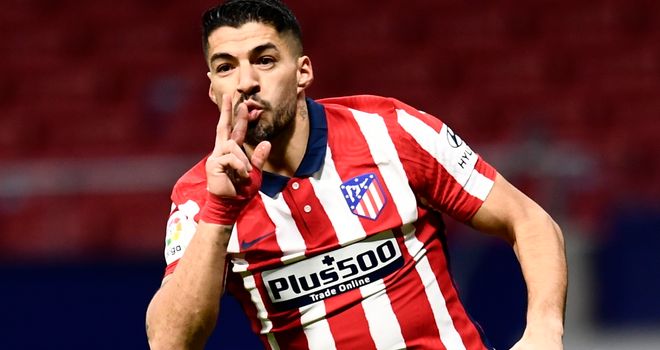 Luis Suarez has excelled since his summer move to Atletico Madrid

The pair are followed by Villarreal's Gerard Moreno in third place, who has scored 14 times in 20 La Liga games this season, with two assists. Youssef En-Nesyri is enjoying life at Sevilla since his move last January and is one behind Moreno with 13 goals in 24 appearances, although is yet to register an assist.

Bundesliga - Can anyone stop Lewandowski? 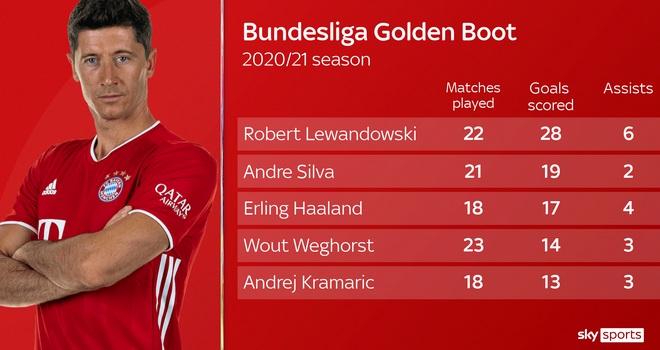 The only league where you could probably crown the winner now - barring a season-ending injury or tremendous drop in form. However, one thing Robert Lewandowski doesn't lack is a goal, having scored 28 times in the Bundesliga with just 22 appearances at a rate of 1.27 goals per game. He has also racked up six assists.

He has won five Bundesliga Golden Boots, including each of the last three, adding to his top scorer title from his time in the Polish Ekstraklasa. He is currently leading the way for the Golden Shoe, which he is yet to win.

A permanent contract suits Andre Silva, having signed a three-year deal with Eintracht Frankfurt in September after a year-long loan spell at the club from AC Milan. He has scored 19 goals in 21 games this season, along with two assists, and won the Bundesliga Player of the Month in January after scoring seven goals in six games.

Erling Haaland rounds out the top three as he continues to light things up at Borussia Dortmund - he has played in 18 games with 17 goals scored with four assists. The only Golden Boot award he has won in his career so far came at the U20 World Cup in 2019, but expect to see his name among the trophy-winners for many years to come. Paris Saint-Germain's Kylian Mbappe leads the way in Ligue 1 with 18 goals in 23 games, including six assists. Aged just 22, he is on course for his third Golden Boot award in the French league, having been the top goalscorer in the last two seasons.

He shared last year's accolade with Wissam Ben Yedder, who is once again in contention. He is currently third with 13 goals in 26 Monaco appearances, registering four assists. Sandwiched in the middle is Lyon's Memphis Depay, with 14 goals in 27 games, along with seven assists.

One notable absence from the frontrunners is Neymar, whose season has been hit by injury and suspension. He is currently joint-25th in the standings but has a decent enough record, scoring six goals in 11 Ligue 1 games with three assists.