Will Arsenal prioritise the Europa League now? Leicester secure huge win having stared down the barrel, and Villa are once again indebted to Emi Martinez brilliance. The story of Arsenal's season or the story of Arsenal's last 15 years? Mikel Arteta's side should have won with comfort to spare at Burnley. That they didn't was the consequence of familiar foes: profligacy of the most glaring kind, the concession of a gift-wrapped equaliser, some significant bad luck in the form of hitting the woodwork twice, and the mitigation of unfathomable decision-making from officialdom.

VAR may well have been right to overturn the award of an 85th-minute penalty against Erik Pieters, but Arteta was justified in questioning how it missed the Burnley defender's earlier offence. This was a clear and obvious mistake by a concept that was supposed to be guarding against just that.

In the form table, Arsenal are in the top four since Christmas. But it's their form in the month before Christmas which has left them with no margin for dropped points like this in the fight for European football next season.

Arteta's team selection at Burnley offered no suggestion that he has given up on the pursuit of Europe via the Premier League, but there's another route in for the Gunners to pursue and it will be interesting to see if and how Arteta's outlook shifts over the next two weeks. This Thursday, the Gunners face Olympiakos in the Europa League and then play on Sunday against Tottenham. The week after, it's Olympiakos again and then another London derby against West Ham.

Should Arteta prioritise one set of games over the other? If so, which set?

It's a dilemma - but one which the failure to win at Burnley may have answered already.
Pete Gill Burnley are now six points clear of the bottom three

After four unbeaten games against sides around them in the bottom half of the table, Burnley faced a daunting run of fixtures.

First came the gut-punch of a 4-0 defeat to Tottenham, but 1-1 draws against Leicester and Arsenal have yielded encouraging performances. Burnley arguably should have come away with more against the Foxes, especially after a dominant first half, while their point on Saturday showed off that trademark Burnley defence.

Arsenal had 15 shots at Turf Moor, with only three ending up on target - although one of these was Pierre-Emerick Aubameyang's opener. The remaining 12 shots ended up with a 50-50 split of being off target and blocked as James Tarkowski and Ben Mee proved again why they are such an effect centre-back pairing.

There was also a slice of luck with the result. Granit Xhaka's moment of madness saw the ball ping off Chris Wood and into the back of an empty net for the striker's fifth goal of the season.

But Burnley will not be too fussed about how the ball went in, only that it did. It is these precious points against clubs higher up the table that will be among the deciding factors come May, with six points now between themselves and the bottom three.

Burnley have only won once in their last nine Premier League outings, and the task now will be converting those into wins. However, if you can't win, don't lose and every point is a step closer to safety.
Charlotte Marsh

Faint glimpse of what fit Saints can do 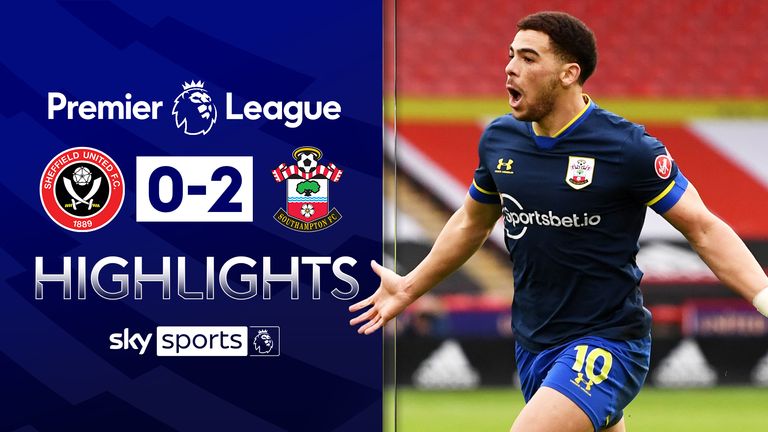 Southampton still have plenty of injury worries but having Kyle Walker-Peters and Takumi Minamino back in their line-up to face, and beat, Sheffield United was certainly a start. Did it give them three points? No, but it played a part.

Playing Jan Bednarek at right-back has robbed Ralph Hasenhuttl of a good central defender in the absence of Walker-Peters, and his return immediately made the side look more balanced.

Further forward, Minamino was typically lively on his return and should have scored. Hasenhuttl will be cursing what might have been had his side not gone through an injury crisis in the last few months.

Only players at Newcastle, Crystal Palace and Liverpool have missed more days through injury this season than those at St Mary's, even though Southampton have made the second-lowest number of changes per game of any side - Leeds, unsurprisingly, are bottom of the list.

Before the New Year, when Southampton were three points off third, Hasenhuttl was looking at a European tour. Ever since he's spent more time looking at the physio table. Sheffield United were not a team ready to put up the toughest resistance, but with their shape restored and getting closer to a fit squad, Southampton looked more themselves.

Last season the question marks came over the Saints' dreadful start, without which they might have been fighting for a place in Europe. Likewise this season, had they not been decimated by injury. Will we finally see what they are capable of in 2021/22?
Ron Walker 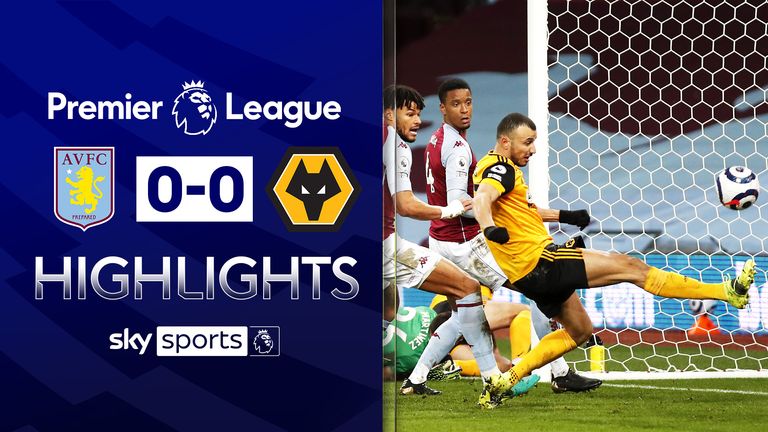 Aston Villa's 0-0 draw with Wolves means they have now scored twice in five games, but Dean Smith isn't too concerned as the chances haven't dried up in the continued absence of Jack Grealish.

The crossbar was struck twice in the opening period during the goalless draw with Wolves - Ollie Watkins reacquainting himself with the woodwork for the seventh time this season - but the hosts faded as a unit after the break and Smith was once again indebted to his goalkeeper.

Emiliano Martinez has been growing in stature all campaign - and told my colleague Oliver Yew in the build-up to Saturday's Midlands derby that he has "never loved football as much as I do now."

Determined to repay Villa's trust in him having arrived for £17m last summer, the 28-year-old covered another chunk of that fee with an outstanding save to preserve his side's point.

Smith said: "Emi has become very important for us, and I keep eulogising about how well he's done for us, but also he'll be the first to say he's been well protected as well.

"I've said a few times that defending doesn't get glorified enough, but we've shown a real desire to keep the ball out of the back of the net and it's helped us accumulate points this season."

It secured Martinez's 14th clean sheet in Villa's 26 league games and was his 20th in the Premier League. No Argentine goalkeeper has more shut-outs in the division than the former Arsenal stopper, level with Julian Speroni.

Villa's European hopes suffered another setback but this was a case of one point gained thanks to Martinez's exploits.
Ben Grounds

Goal-shy Traore must come to fore 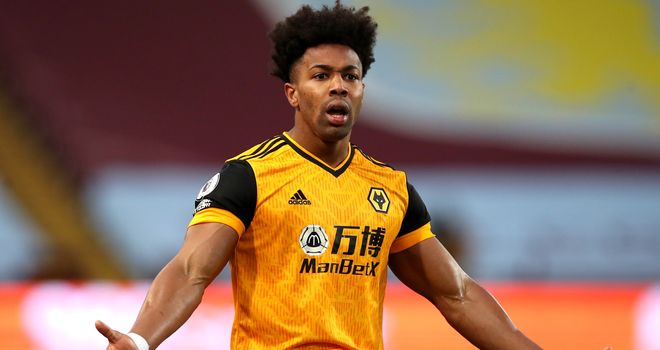 Adam Traore struggled to impose himself during the Midlands derby

Following the stalemate at Villa Park, it is now 46 Premier League games without a goal for Adama Traore.

Wolves' struggles have been well documented this season; goals have been hard to come by without Raul Jimenez, but the Mexican's supporting cast have fallen desperately short.

The explosive winger is also without an assist this term - discounting his role in Illan Meslier's own goal for Leeds last month - and while Pedro Neto did his best on the opposite flank to unlock Villa's stubborn defence, Traore has looked shorn of confidence for some time.

Jamie Redknapp said prior to kick-off: "I nearly fell off my sofa when I heard the other night Traore hadn't scored a goal or provided an assist this season, but he's had the most successful dribbles - it doesn't make sense."

Traore and Wolves improved in the second period but they still look light in attack, relying on defenders Conor Coady and Romain Saiss for clear-cut chances.

"The expectation on Adama is very high and my view is that he's growing as a player," Nuno Espirito Santo said.

"Now he is playing on the left side and opponents are putting two players on him every time. It's not easy but the expectations we place on him are very high as there is so much talent there. We just want him to explode. He does a lot for the team and I'm positive that he's going to reach his peak."

Encouragingly, Jimenez is in non-contract training as he continues to recover from the fractured skull he suffered in November but Daniel Podence remains out. The onus is on Traore to come to the fore.
Ben Grounds

Leicester's biggest win of the season? Winning when playing bad. Many say it's a good sign, but the truth is Leicester got away with one at the Amex following another off-colour performance, and the relief on Brendan Rodgers' face was clear to see.

Given Leicester's injury issues and form of late - before Daniel Amartey's late winner, Leicester were looking at just three wins from their last nine - many Foxes fans were getting a sense of déjà vu after last season's collapse.

Indeed, before this win, Leicester had won 15, drawn five, lost seven and scored 50, exactly the same number as after 27 games last season. But as the floor beneath them was beginning to crack in the latter stages, Rodgers' side showed character to move through the gears and grab a messy winner in a game they were second-best in for nearly an hour.

Either side of Wesley Fofana, right and left centre-backs Amartey and Caglar Soyuncu were stretched about the backline by Brighton's runners, leaving Fofana exposed, and an island to be attacked in the middle of defence.

When they reverted to a back four, Leicester looked more comfortable. Without many of their key players, Rodgers may look for familiarity and solidity first and foremost to get Leicester over the line.
Gerard Brand