Patrik Schick strikes at the end of the first half and start of the second period to help Czech Republic beat Scotland 2-0 at Hampden Park in Group D of Euro 2020; Scots next take on England at Wembley Stadium on Friday night, while the Czechs face Croatia 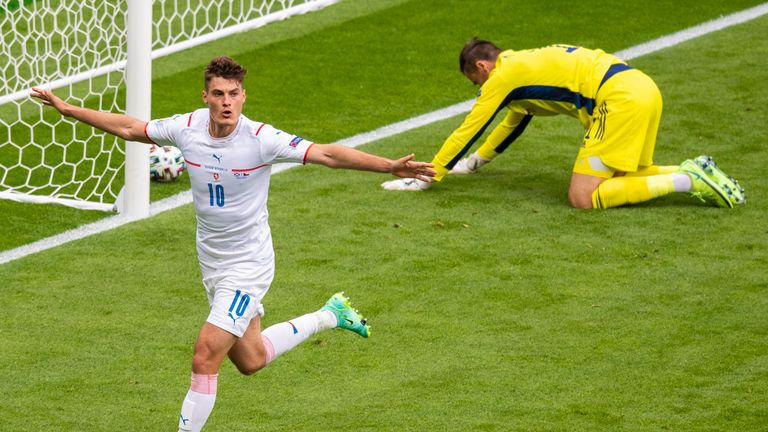 Scotland started their Euro 2020 campaign with a 2-0 defeat at home to the Czech Republic, but who starred and who struggled in their big Hampden Park opener? 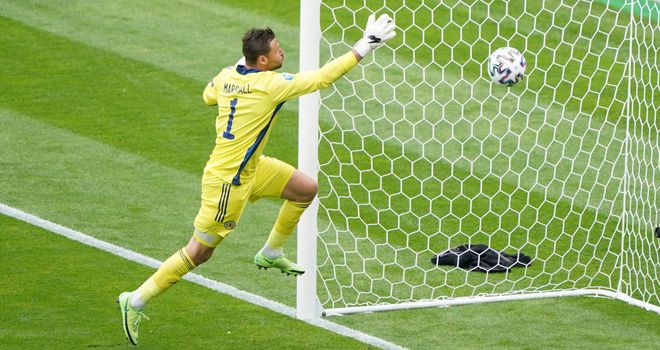 Great stop to deny Schick early on, but was helpless for both Czech goals, even though the second was scored from just inside his own side's half. Kept the final scoreline down with two excellent saves at the start of the second half.

Won several important challenges both on the floor and in the air as Scotland dominated most of the first half, but failed to stop Vladimir Coufal's cross for Patrik Schick's opener.

One raking, defence-splitting pass almost released Lyndon Dykes in the first half, although the Leeds United central defender - who replaced the Injured Kieran Tierney in the back three - may have done better for the Czechs' first goal.

A calm and composed display at the back for most of the game from the Celtic defender, who also came desperately close to bringing his team level when hitting the bar at the start of the second half. However, his optimistic decision to shoot inadvertently led to Schick's second, before being replaced midway through the second half as Steve Clarke changed formation in the search for goals.

His failure to clear his lines on the right touchline led to an early Schick chance, before being beaten in the air for the same player's opening goal. Great early ball in for Dykes, who toe poked wide of the goal, before being denied by Tomas Vaclik's fine tip over. A constant attacking threat with his lung-busting runs down the left.

Some typically robust challenges in the centre of the park from the Man Utd midfielder, who also wanted a penalty after being blocked off in the box just before half-time, only for the German official to wave away his protests. Dropped into the back three when Clarke made some tactical tweaks midway through the second half. 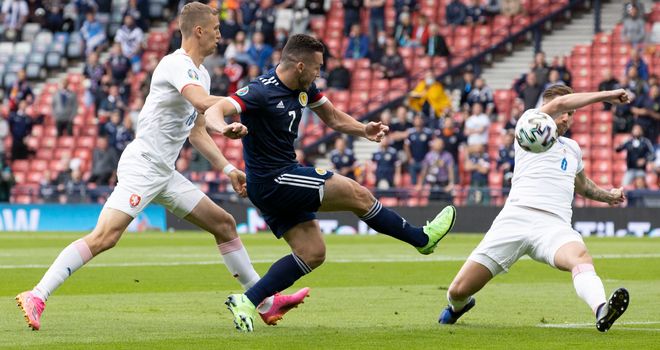 Scotland's John McGinn gets a shot away

Saw an early goalbound shot blocked and was lively throughout the first period, only to wane as Scotland chased the game.

Some bits of lovely interplay with Robertson down the left in the first half, while his goalbound effort was deflected over by Tomas Kalas, before being subbed midway through the first half.

Went close with a stabbed effort just past the quarter-hour mark, before twice being denied by Vaclik, first a close-range block on 62 minutes and then by the Czech No 1's outstretched boot minutes later.

Showed some wonderful quick feet on the right side of the box to escape a couple of Czech defenders, before a nice lay-off put Robertson in for a shot on goal before half-time. However, the Celtic midfielder was replaced at the break.

Replaced Christie at half-time as Clarke went with two up front and the Southampton striker immediately gave the hosts another attacking outlet.

Introduced midway through the second period, but despite seeing much of the ball down the right, failed to create any clear-cut openings.

Made little impact after his introduction on 67 minutes.

Brought on with 11 minutes to go and had a snap shot that tested Vaclik late on.

Had a late solo run and dribble, only for his strike to be blocked for a corner after being introduced on 79 minutes.

Great first-half tip over to deny Robertson, before a brilliant stretch prevented a Kalas own goal just before Schick's stunning second. However, the 'keeper also had to be alert to twice deny Dykes in quick succession just past the hour-mark.

A vital late block prevented substitute Forrest from pulling a goal back for the Scots.

The West Ham right-back set up the visitors' opener with an inch-perfect cross from the flank.

Important early block to prevent McGinn from opening the scoring, before almost netting a spectacular own goal at start of the second half.

Was not penalised despite seeming to block McTominay off in the box just before half-time, almost adding a third goal with a shot that curled just over and also blazed over late on.

The Czech skipper was denied by an excellent Marshall stop at the start of the second half, before being hooked late on.

Appeared to use a hand to prevent McGinn's first-half shot from testing Marshall, although it would have been a harsh penalty, before being replaced with 18 minutes to go.

A quiet game from the Sampdoria midfielder, who was subbed as a result on 72 minutes.

As West Ham fans can relate, the midfielder was vital for his side when both defending and attacking set plays, as well as when breaking up any number of Scotland attacks.

Sat just in front of the Czechs' back four, providing a vital defensive shield throughout the game. 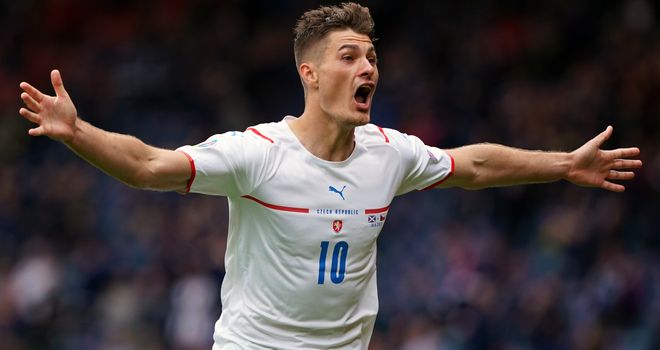 A man-of-the-match display from the Bayer Leverkusen forward, who was thwarted early on by Marshall's reflex save. However, he was not to be denied, first expertly glancing home just before the break, before scoring his 12th goal for his country with an outrageous 40-yard strike. And he should really have grabbed his hat-trick with nine minutes to go, only to shoot straight at Marshall with the goal at his mercy.

Introduced midway through the second half.

Only given three minutes at the end.

The Burnley frontman was given an 18-minute run-out at the end.

Introduced on 72 minutes as the visitors looked to freshen things up and protect their lead.