Euro 2020 hits and misses: France live up to their billing while Cristiano Ronaldo stars for Portugal

France's performance at the Allianz Arena underlines their completeness; Cristiano Ronaldo scores a record-breaking double for holders Portugal; Germany find themselves under pressure in Group F; plus: talking points from Sunday's games

France live up to their billing 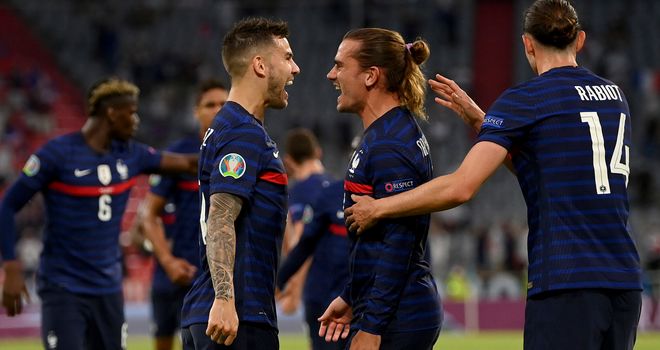 French players celebrate after their first goal against Germany

World champions and Euro 2020 favourites, France lived up to expectations in their opening fixture, claiming a 1-0 victory over Germany which puts them in a strong position in Group F.

It took an own goal from Mats Hummels to secure the points but Didier Deschamps' side were deserving winners and on this evidence, they will be difficult for any side to overcome.

This was not a free-flowing attacking performance but Kylian Mbappe delivered some dazzling moments, scoring a sublime goal which was unfortunately ruled out for offside then setting up the returning Karim Benzema for another which was chalked off.

The 22-year-old's pace terrified Germany, as it will every defence he meets at this tournament, but Didier Deschamps' side is stacked with talent and they were even more impressive in other areas of the pitch.

"We spent all night talking about France's attacking players, but again another clean sheet," said Roy Keane on ITV. "That's a defence that can win them the title. They are brilliant at the back."

Raphael Varane was the standout performer in their backline but the Real Madrid centre-back was superbly protected. N'Golo Kante was typically industrious and alert in the holding role and Paul Pogba was similarly important in that sense.

The Manchester United midfielder's most notable contribution - among many - was the sensational pass to release Lucas Hernandez in the build-up to the decisive goal, but the numbers underlined the effectiveness of his defensive performance too.

Pogba ranked top among France players for interceptions while only Benjamin Pavard made more tackles. In terms of ball recoveries, no player on either side came close to his total of 12.

The 28-year-old is the main source of creativity in this France team, but he is also a defensive lynchpin when they are forced onto the back foot as they were at times against Germany. His completeness mirrors that of the side as a whole.

They will take some stopping.
Nick Wright 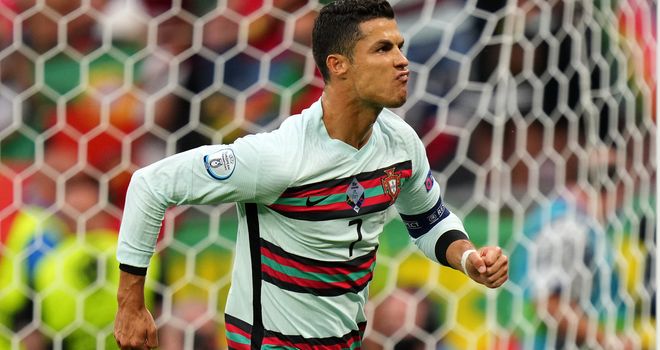 We've long since run out of words to describe the phenomenon that is Cristiano Ronaldo. Gary Neville tried his best, but the Portuguese just continues to defy description, or defending for that matter!

Ronaldo has unashamedly hoovered up trophies and accolades in the club game and repeating that on the international stage is all that stands between him and unquestionable greatness.

Guiding Portugal to glory at Euro 2016 went some way to underlining that greatness but a mere 90 minutes at Euro 2020 has virtually guaranteed it.

His two late strikes, the first from the penalty spot, the second a moment of individual brilliance, saw Ronaldo eclipse the great Michel Platini's tally of nine goals in European Championship finals and move to within three goals of footballing immortality - Ali Daei's international goals tally of 109.

With France and Germany up next in Group F, and Italy and England possible opponents in the knockout stages - teams Ronaldo has failed to score against thus far - it would be some achievement were he to do it this summer. If he does, his legacy would be untouchable, and Portugal may just retain their crown.
Jack Wilkinson The narrative coming into Euro 2020 was write Germany off at your peril.

Joachim Low's side had some indifferent form coming into the tournament, but many believed Germany would be alright on the night. Well, they always are, aren't they?

However, defeat in their opening game against France puts the pressure firmly on Low and his side ahead of a crucial clash with Portugal on Saturday.

Defeat to France leaves the Germans with an unwanted piece of history. They have suffered defeat in their opening game of a European Championship for the very first time, having won seven and drawn five of their previous 12 matches.

It leaves them not only with an uphill battle in Group F where they are already three points adrift of France and Portugal, but the stats point to it being a big blow to their hopes of sending Low, who will leave his post as Germany boss after the tournament, out on a high.

Only one side has gone on to win the Euros after losing their opening game of a tournament - Netherlands back in 1988.

Germany have a mountain to climb and it starts against Cristiano Ronaldo and Co in Munich on Saturday.
Oliver Yew

Have toothless Scotland blown their chance? John McGinn admitted Scotland would have to "do it the hard way" after their most straightforward game of Euro 2020 ended in defeat and left them with an uphill struggle to qualify from Group D. He wasn't wrong.

Facing the Czech Republic, a team only four places above them in the FIFA rankings who finished just two points above them in their Nations League group, was not so much must-win as must-not-lose as Steve Clarke's men returned to the big time after 23 years.

Even conceding two defensively frustrating goals, one from a poorly defended cross and the other a wondergoal still owing something to some ridiculous defensive positioning from David Marshall, might not have been fatal had the hosts taken their chances at Hampden Park.

Lyndon Dykes should have beaten Tomas Vaclik from close range and Andy Robertson had to at least test him as the Scots saw opportunities come and go in either half.

Considering this was not even a first-choice Czech defence, owing to Ondrej Kudela's ban from UEFA competitions, they needed to be better. Clarke was not giving away any state secrets saying his side "needed to be more clinical", because if they can't do it against a backline including Bristol City's captain, can they do it against England or Croatia? 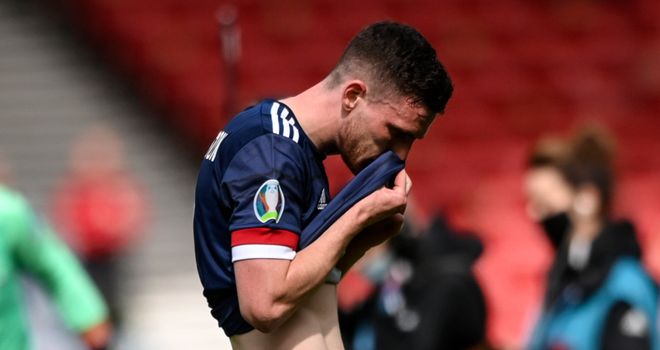 There could yet be a twist in the tale - the 'local' rivalry between England and Scotland will play its own part in Friday's showdown at Wembley, and World Cup runners-up Croatia are not, as we saw on Sunday, the same team as they were three years ago.

But on this evidence that doesn't look like enough. Scotland need to win at least one of those games to stand any hope of qualification. If their finishing continues in the same vein, they haven't got much of a hope.
Ron Walker Luis Enrique will be wondering how Spain didn't score against Sweden.

The three-time European champions totally dominated Sweden, passing Janne Andersson's side into submission at times, but Spain's lack of a clinical striker proved costly as they were held to a 0-0 draw.

Alvaro Morata was the biggest culprit, spurning two gilt-edged chances, one in each half as Spain opened their tournament in frustrating fashion.

He wasn't the only one, though, as Spain had 17 shots against Sweden, their highest tally in a major tournament game (European Championships + World Cup) without scoring since having 25 attempts against Switzerland in a group stage defeat at the 2010 World Cup.

Spain went on to win that tournament after the defeat to Switzerland, but if they are to bounce back again at Euro 2020, they will need to find a solution to their issues in front of goal.

Gerard Moreno, who has scored 30 goals this season for Europa League winners Villarreal, was left on the bench until the 74th minute but after a bright finish to the game, he will surely come into contention when Spain face Poland on Saturday.

Overall, Spain's performance was excellent. A 0-0 draw against Sweden in the opening game of the tournament is not all that bad, but they will have to be much more clinical if they are to go deep into this tournament.
Oliver Yew

Could Slovakia be the Euro 2020 underdogs? 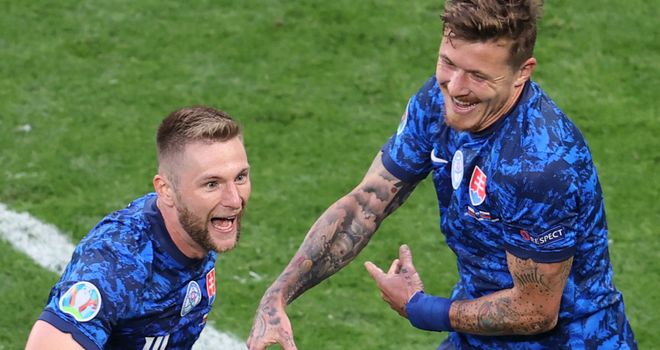 Major tournaments always seem to have that side that go on a sensational run and reach much further than anyone expected. At Euro 2016, it was Wales. But this time around, could it be Slovakia?

Poland were the heavy favourites heading into their Group E clash on Tuesday, but they could not find a way past a well-drilled Slovakia. Recent Serie A winner Milan Skriniar was imperious at the back and scored a sensational goal.

And let's make no mistake about it - Slovakia deserved to win. They saw the better chances throughout and neutralised the danger of Robert Lewandowski.

Slovakia manager Stefan Tarkovic said after the game: "We had analysed the Polish style of play in great detail. Poland play a lot down the left side, but Lukas Haraslin made a great effort to snuff out that threat.

"We are a small country and I am very happy we have managed to achieve such a result against such a big and important country. This result means a lot to me, but it doesn't mean we have already advanced."

With Spain and Sweden playing out a 0-0 draw, Slovakia now top Group E and are in a perfect position to qualify for the knockout rounds for a second successive European Championships.

Underestimate them at your peril…
Charlotte Marsh Ahead of Euro 2020, Robert Lewandowski blasted the football schedule since the restart last year.

"So many people forget we're humans, we're not machines, we cannot play every day at the highest level of performance," Lewandowski , who has now played 61 matches for club and country since last May, told The Times.

"For football and for young players, that will be the big problem, to stay at the top for many years, because now and maybe the next two years, that will be extreme: so many big games."

But despite another record-breaking season with Bayern Munich, perhaps the fatigue was starting to show with Lewandowski anonymous for much of the game. In fact, the striker has scored with just two of his 35 shots for Poland at major tournaments (12 apps across European Championship and World Cup competitions), failing to score with his last 17 attempts for his national side in such games, since netting against Portugal at Euro 2016.

Of course, he will be the main target for many defences at Euro 2020, and Slovakia marshalled him to great effect. But with such talent, Poland will be hoping he comes good for them over the next few weeks as they look to qualify from the bottom of Group E.
Charlotte Marsh