However, Austria produced a lifeless display at the Johan Cruyff Arena and must now beat Ukraine on Monday to finish second in Group C

It's official: Netherlands are back 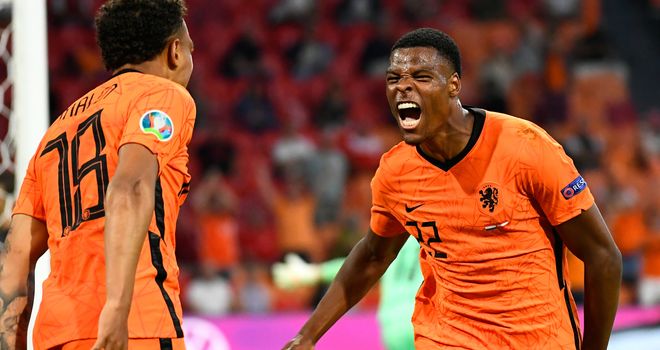 When talking about the Euro 2020 favourites, the Netherlands - playing at their first major tournament in seven years - were not discussed among them. For a country that has a history of reaching the latter stages of big competitions, it has been a turbulent time.

But with their performance against Austria, the Netherlands sent a clear message - we're back and ready to compete.

It was an incredibly easy victory for the Dutch against a poor Austrian side, but some of the play they produced was sublime. Georginio Wijnaldum and Frenkie De Jong were simply sensational as they muted Austria at every turn - not just in midfield.

It also further adds to the conundrum of how and why Liverpool let Wijnaldum leave, let alone for free.

Matthijs De Ligt returned in defence after picking up a pre-tournament injury and after letting in two goals against Ukraine, he helped the Netherlands to a clean sheet. The hosts looked far more assured at the back with him there and he completed 100 per cent of his passes (40/40) - a record for a Netherlands player in a EUROs match since 1980.

Memphis Depay was lively up front again, getting himself off the scoring mark, while Denzel Dumfries followed up his Ukraine winner with another superbly taken goal. He is only the second Oranje player to net in his first two appearances at the Euros, after Ruud van Nistelrooy in 2004.

And let's not forget - the Netherlands are still missing key players in Virgil van Dijk and Donny Van De Beek. Frank De Boer has already steered his side through as group winners and the Netherlands will be a match for whomever they draw next.
Charlotte Marsh Austria were hugely disappointing in Amsterdam

Austria captain David Alaba was named the man of the match in the opening match against North Macedonia and is often the focal point for his country.

In recent seasons, he has undergone a transformation from left-back to centre-back, brought about by an injury crisis at Bayern Munich, and lined up in the same spot against the Netherlands as he did on Sunday.

But Alaba had a night in Amsterdam he would rather forget. He gave away an early penalty after a foul on Dumfries, and almost gave away another when Depay nipped through to steal a ball that had bounced in front of the Austria captain.

There was one moment of brilliance when he skimmed a thunderous effort from range just wide, but much more of that was needed. Austria missed their biggest star.

The absence of Marko Arnautovic was also keenly felt. The striker was banned for one game after insulting a North Macedonian player after scoring in their meetings. After an influential impact off the bench, Arnautovic was in line to start, but Austria's plans abruptly changed.

He was the exact kind of influence they needed, especially after going behind so early on. Andreas Ulmer made some good crosses into the area, but the target man was missing.

Austria need to beat Ukraine next week to secure second spot in Group C. Arnautovic will return and Alaba will surely be back to his usual best, but Austria must improve in all areas to compete in the knockout stages.
Charlotte Marsh De Bruyne turned the game on its head in Copenhagen

Things were looking bleak for Belgium at half-time at the Telia Parken, with the world's No 1-ranked team having been run ragged by their Danish hosts.

So much so, in fact, that Roberto Martinez's side would have counted themselves more than a little fortunate to only be one goal behind at the break, scored after just 99 seconds by Yussuf Poulsen.

But then came the introduction of Man City playmaker Kevin De Bruyne, now recovered from the multiple facial fractures he suffered after a bruising encounter with Chelsea defender Antonio Rudiger in last month's Champions League final.

And De Bruyne wasted little time in turning this Group B showdown on its head, firstly laying the equalising goal on a plate for Thorgan Hazard, before winning the game with a sumptuous strike from the edge of the area that flashed past Kasper Schmeichel at his near post.

And that winner meant Belgium have now joined Italy and Netherlands in the last 16 of the tournament with a game to spare and no one will want to face them in the knockout phase now that De Bruyne is back firing on all cylinders.
Richard Morgan

Who can stop the Italians? Gary Neville reflected on his own hesitancy at half-time to call Switzerland a "nice" team in his role as an ITV pundit, but what became increasingly apparent was that he should have shown more courage in his perception.

They arrived on a good run, unbeaten in eight stretching back to last November, but still without the belief they could win a big game.

Italy were never in trouble. Manuel Locatelli fired them into the knockout phase at Euro 2020 after the most routine 3-0 win you are ever likely to see. 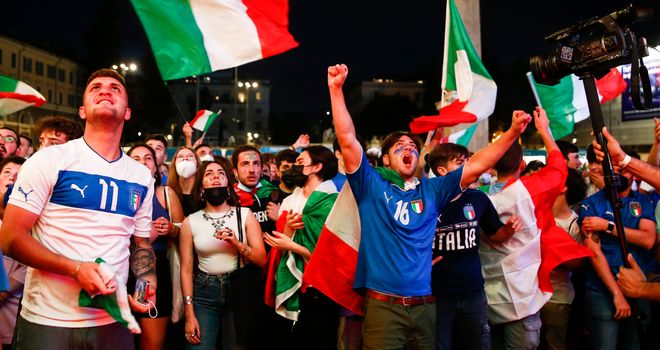 The Sassuolo midfielder grabbed a classy double before Ciro Immobile wrapped up a comfortable victory as Italy became the first team to book a last-16 spot. The biggest concern for Roberto Mancini's side is they may arrive in the knockout stages having not been tested.

Now unbeaten in 29 games in all competitions since a UEFA Nations League defeat against Portugal in 2018, Mancini will be at pains to make sure they become the first team since Germany in Euro 2012 to record three group-stage wins.

Only once in their history have they gone on a longer run without defeat (30 games between November 1935 to July 1939). They can match that run when Wales visit Rome on Sunday, but there is a growing belief that a first European Championship triumph since 1968 is within their grasp.
Ben Grounds

Wales get fans dreaming of 2016 repeat 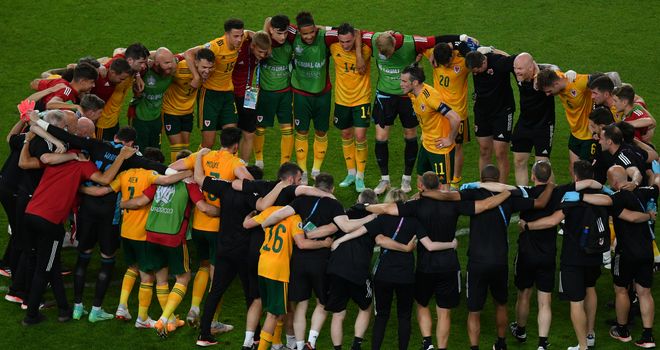 Wales are channelling the spirit of 2016

Robert Page had been perhaps kinder than he might have been about Wales' Euro 2020 opener against Switzerland given the result they achieved was a good one, despite a patchy performance.

But he had no reason to gloss over anything after an excellent 2-0 win over Turkey which would have been by more goals had Aaron Ramsey or Gareth Bale buried a hatful of chances they both created and missed on Tuesday evening.

Unsurprisingly it is coming to pass that those two will be crucial in their success at this competition and from their opening two games, it looks as though they have done enough to help them into the last 16.

It would take a very cruel series of events for Sunday's game in Italy to have any bearing on whether Wales qualify, but the manner of their win over Turkey - reminiscent of a similar group stage victory over Russia five years ago - means Page, his team and their fans can wonder whether a repeat performance might just be a possibility. Rob Page has done everything asked of him

Wales might not be able to pull another Belgium result out of the hat - although finishing third would potentially give them the opportunity to do so - but should they finish second in Group A, it is likely one of Russia or Finland awaits them in the last-16, two eminently beatable teams.

"I thought I showed good character to help the team keep going," Bale told the BBC after he bounced back from missing a second-half penalty to set up Connor Roberts' last-minute second goal.

If he and his team-mates keep up that level of personality, there's every chance there may be another famous summer on the cards across the River Severn.
Ron Walker