Plus: Antoine Griezmann shows his worth to France yet again, Portugal may sink without trace, and Hungary's Attila Fiola picks the perfect time to announce himself It was the kind of performance that made us all feel foolish.

It was an easy trap to fall into, thinking this Germany side were below the level of their predecessors and highly unlikely to end Joachim Low's final tournament in charge on a high note.

After all, they'd lost 6-0 to Spain in November. They'd been beaten at home by North Macedonia in March. Their opening group game defeat to France wasn't a disaster but the tournament favourites appeared to expose the weaknesses in this German side.

And then they destroyed Portugal.

Cristiano Ronaldo may have put the defending champions ahead with a lightning-quick counter-attack but Germany had started like a train, creating chance after chance, before forcing in two own goals to flip the contest on its head.

Their wing-backs stretched Portugal from side to side, with Robin Gosens repeatedly profiting from the space the tactic afforded him, while in central areas Toni Kroos controlled the tempo and Serge Gnabry, Thomas Muller and Kai Havertz made the dangerous runs.

A set-piece lapse allowed Portugal to pull another back and Renato Sanches crashed a shot against a post, so there is work to do to shore up at the back, but Germany suddenly looked like a side that will strike real fear into opposition teams.

They could have been facing another embarrassing early elimination to match their 2018 World Cup exit had they lost to Portugal. Instead, they have revived their historical status as a major player at the Euros.
Peter Smith

Griezmann shows his worth once again He may not have had his best game in a France shirt, but Antoine Griezmann was still on hand to sweep home his side's equaliser against Hungary in Budapest on Saturday lunchtime.

The Barcelona forward had a disappointing first half, somehow passing up an open goal to break the deadlock in the Hungarian capital, only to be spared his blushes by an offside flag.

However, the 30-year-old managed to keep up with play, and more importantly strike partner Kylian Mbappe, to sweep home the visitors' deserved leveller midway through the second period.

That was Griezmann's 11th goal at major international tournaments, with only Michel Platini (14), Just Fontaine (13) and Thierry Henry (12) having more for Les Bleus.

It was not just the frontman's goal that caught the eye however - although it could yet prove vital come the end of Matchday Three - but also his tireless working back down the wing to assist right-back Benjamin Pavard with his defensive duties.
Richard Morgan

Transitional Spain need to get a move on This has not been a tiki-taka Spain squad for a long time now. But there is still plenty of talent for Luis Enrique to pick from. Ferran Torres, fresh from a bright opening season with Manchester City. Dani Olmo, impressing for RB Leipzig. Gerard Moreno, scoring goals for fun at Villarreal.

There are few stars in their own right, perhaps only Jordi Alba given the absence of Sergio Ramos. Spain are a team in transition, but what are they transitioning into? Their attacking flair is their biggest strength but for a second time in as many games, they flattered to deceive in the final third against Poland.

It was the kind of game Luis Aragones' Euro 2008 winners, or Pep Guardiola's Barcelona, would have enjoyed in their pomp, passing their opposition into submission. This Spain team tried to play like that against Sweden, ending with more than 85 per cent of possession. Poland looked to give them a little more of a game, but it was more of the same in Seville.

There is pace, there is technical ability and there are runners in the Spain squad, but there isn't enough sign of the high tempo to match and instead against the Poles' back three, Enrique's side played into their hands, were forced wide and produced 27 crosses. That's not Alvaro Morata, Olmo or Moreno's game.

Spain can mould their as yet still developing but talented team into something more cohesive, and they'll have to if they are going to beat Slovakia on Wednesday, because on this evidence it does not look like a guarantee.

But Enrique does not have time on his side. Tournament football is ruthless and right now, Spain are toothless.
Ron Walker

History repeating as Portugal put to the sword? 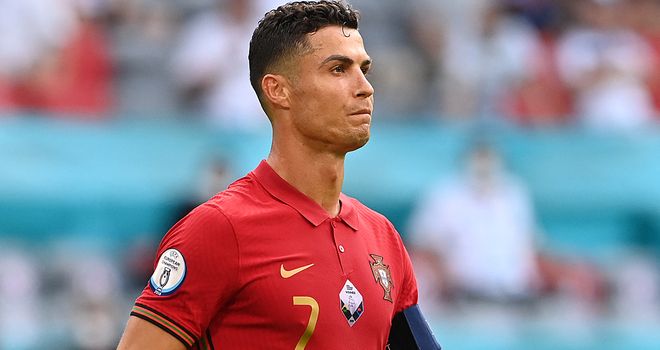 And to think, things started so well for Portugal in Munich.

The holders looked well on course to deal another huge blow to Germany's qualification ambitions, and potentially bring the curtain down on Joachim Low's 15-year reign, only to succumb to Germany's clinical and concerted pressure.

Ruben Dias and Raphael Guerreiro were the unfortunate scorers of two own goals in four minutes as Portugal became the first-ever team to put through their own net twice in a European Championship game.

Things would only go from bad to worse for Fernando Santos' side. Second-half goals from Kai Havertz and the superb Gosens saw Germany run riot and secured Portugal the unwanted record of becoming the first reigning champions to ship four goals at the Euros.

It was the second time Portugal conceded four goals at a major tournament, with no other than Germany responsible on both occasions. The last time it happened was in the group stages of the 2014 World Cup, where Portugal failed to navigate their way out of the group.

With Group F, the tournament's group of death, living up to its billing, and with world champions France awaiting on Matchday 3, this damaging defeat will have the Portuguese fearing history could repeat itself.
Jack Wilkinson

You wait all that time to score for your country…. Attila Fiola made his Hungary debut all of seven years ago, featuring for his country at the last Euros in France, with Saturday's clash against Les Bleus his 37th international appearance.

However, the marauding left-sided wing-back had never scored for the Magyars prior to four games ago, and yet his strike just before half-time that gave the hosts a shock lead and sent the Puskas Arena into delirium means he now has two goals to his name.

And not only that, but in the process the Fehervar full back, 31, also became the oldest player to score against France in a European Championship match since 1984.
Richard Morgan

Podcast: A Scottish night to savour - but what's up with Harry Kane?

Twenty five years on from their last tournament meeting, Scotland sprung an upset of sorts with an encouraging 0-0 draw against England that keeps their Euro 2020 hopes alive. Alice Piper is joined by Luke Shanley, Jess Creighton and Peter Smith to examine exactly where Scotland got it right, before conducting the inquest into England's toothless display.

It was a Wembley performance for Scotland to savour as Steve Clarke's selection earns alibis from supporters and lays the foundation for Tuesday's "must-win" showdown with Croatia. But what's gone wrong with Harry Kane? Will Gareth Southgate drop his captain against the Czech Republic? Is it time for Jack Grealish?

We also hear from Sky Sports News reporter Geraint Hughes to reflect on Wales' triumph over Turkey in Baku before looking ahead to Sunday's final group game against Italy in Rome.