Bruno Lage interview: Wolves new manager explains his vision for the club as a new era begins at Molineux

In an exclusive interview with Sky Sports, new Wolves boss Bruno Lage discusses his journey to Molineux and outlines his vision for a new approach this season… 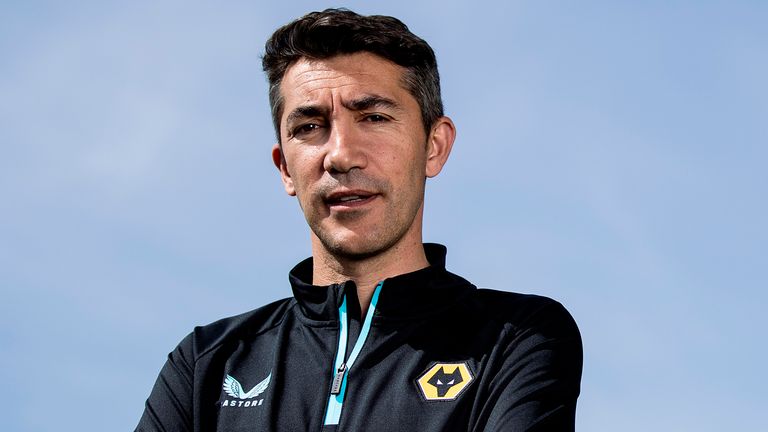 "It is not important what we did in the past," Bruno Lage tells Sky Sports. "What Nuno did in the last three or four years, a lot of success, was amazing. Now, it is a new cycle."

The presence of another Portuguese coach at Molineux, a man who exudes calm just as his predecessor Nuno Espirito Santo did, might seem like a seamless transition. But this is a summer of change for Wolves as they embark on a new era under Lage.

Nuno's impact at the club is not in doubt but after three years of progress, last season's bottom-half finish prompted a parting of the ways amid a feeling that the journey had run its course. Lage has been hired to bring fresh ideas and restore the momentum.

He does not shy away from this need for change. It is why he is here.

"We need to manage the ball better and be more aggressive without the ball," he says. "We want to go forward, to play in a different way. I do not know if it is better or worse, it is just my idea. We need to be a more competitive team, a better team."

This is a coach of some pedigree, a title winner with Benfica just five months into the job having engineered an unlikely turnaround at the famous old club. But others point to the fact that it remains his only job in management and he was gone inside 18 months.

At 45, there are only four coaches in the Premier League younger than him. And yet, that is a little misleading given that even the likes of Dean Smith and Sean Dyche were still playing when Lage took on his first coaching role at Benfica at the age of just 27.

He worked his way up from taking the U10s but he is much more than a child of Benfica. Delve deeper and his experiences are more varied than one might expect. This is a man who has worked in Dubai, Sheffield and Swansea, a man steeped in the game.

He has written two books about coaching, one of them with former Wednesday boss Carlos Carvalhal. His father Fernando, a former player and coach himself, was secretary of the board of general assembly at the association of football coaches in Portugal.

"He was the first influence," says Lage. "I was always watching him prepare the training sessions and prepare the games." At Benfica, his customary walk around the pitch one hour before kick-off attracted some media attention. It was borrowed from his father.

Jaime Graca, the former Portugal player who took him to Benfica in 2004, was another huge factor in his life. Lage named his son after him. "These three people, they were the big influences. The whole way to see the games, the training and how to prepare the team." 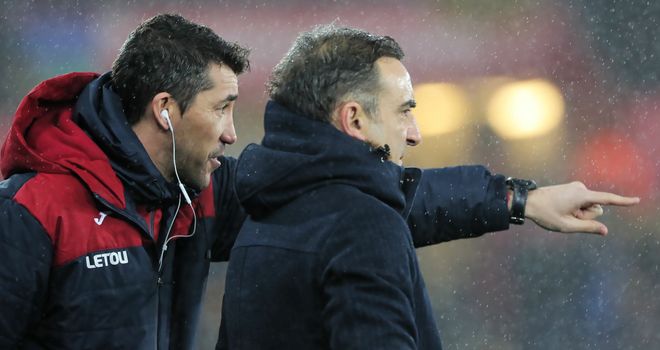 His time with Carvalhal, three seasons at Sheffield Wednesday and six months at Swansea, is why this move to England is not quite as new to him as some might think. He has worked in the Premier League, although he regards his Championship experience as key.

"Sheffield Wednesday was a massive experience for me because of the way that the Championship is organised, competing Saturday and Tuesday. It was part of my success when I arrived at Benfica. It was because of that experience I was able to organise in the short term, play the games without training. It was very important."

Lage faced Nuno's Wolves in the Championship and is full of admiration for the club's rise under owners Fosun. He knows that he has inherited a good group. "The environment between the players, between the players and the staff, it is really amazing."

Indeed, there are times during this interview when even his language echoes that of his predecessor. "They need to play as one unit. That is why the wolf pack means a lot because we need to play as a unit, as a pack. With and without the ball, we go together."

But more often he returns to the idea of this need for change. Lage is in daily contact with sporting director Scott Sellars and he is in search of greater cohesion off the field, his six new staff looking to help link the departments at the club's Compton training base. 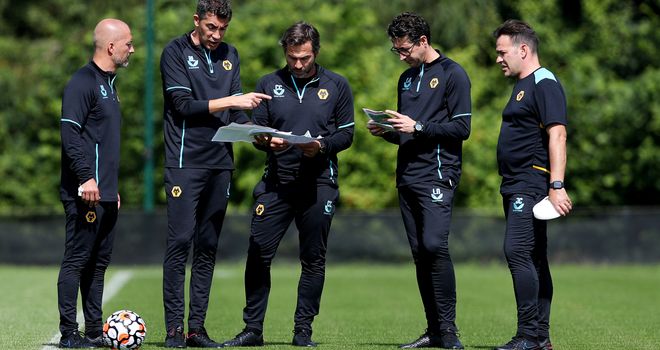 The desire for two players for every position is also a clear break from the smaller squad favoured previously. That approach brought continuity until injuries and fatigue took their toll and a lack of competition for places came to be seen as counterproductive.

Most of all, his focus is on the need for a change of style on the pitch.

"When we have the ball, we need to manage the ball better," he repeats.

"At the same time, when we do not have the ball we should be more aggressive.

"If we go high, everyone goes high. If we stay medium, everyone is medium. If we need to drop to defend our goal, then everyone drops but we are still aggressive because the other team needs to feel that when they play us we are a hard opponent to play against."

He has already identified a softness from set pieces, a major issue last season. "We need to be more alert in those situations because we concede a lot of goals. This is a problem we need to work on and we are working hard to be better in those moments of the game.

"Those are the main things that we have been working on these last two weeks." 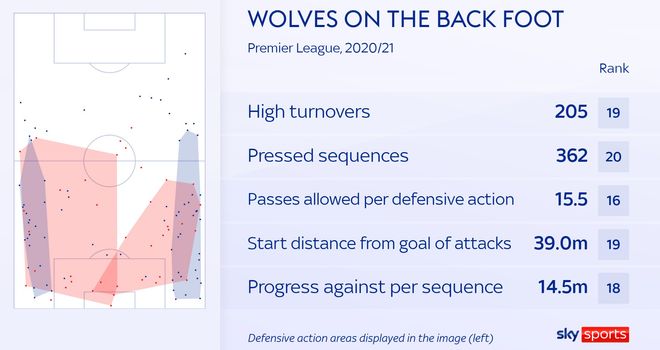 Is a fortnight enough for such a fundamental shift in approach?

Wolves ranked near bottom for most pressing metrics last season and there has been little time to institute this new way of thinking. Conor Coady and Adama Traore have only just returned to training.

The latter is the subject of ongoing transfer speculation. So is Ruben Neves. Pedro Neto and Jonny Otto are long-term absentees. Wilfried Boly and new signing Yerson Mosquera have picked up injuries too. At least star striker Raul Jimenez has made a welcome return. 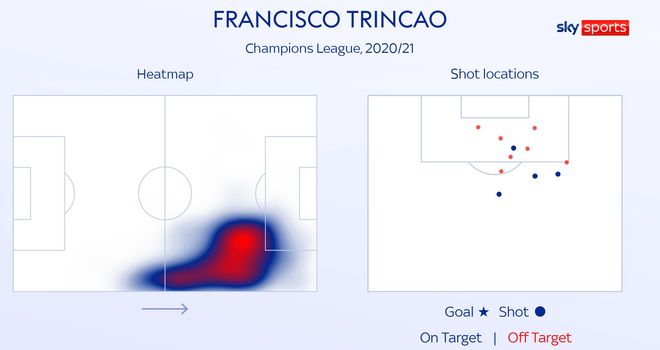 The signing of Francisco Trincao, initially on loan from Barcelona, is an exciting prospect, although Lage prefers to stress the need for his compatriot to adapt. "Trincao is one player," he points out. "First of all, he needs to be a team-mate who works hard for the team."

Then there is Fabio Silva, the teenage striker with a big reputation. There is hope that the presence of Luis Nascimento, Lage's brother and the coach whom Silva refers to as the most important figure in his fledgling career, could be the catalyst for him to kick on.

The manager has a message to him and the rest.

"Every day is a challenge to these guys because what the fans want in the end, they don't care whether the player is 18 or 30, what they want is a competitive team with top players." 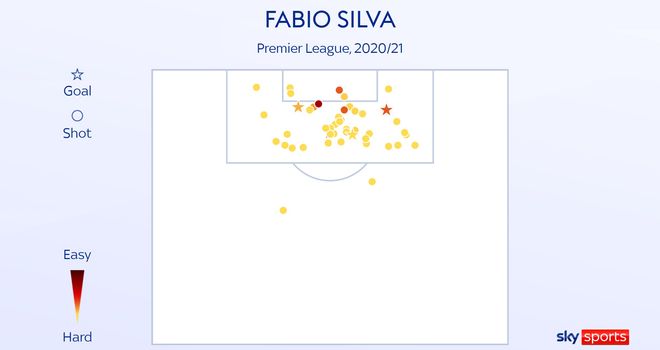 Those supporters appear to have embraced the new man during pre-season - Bruno for Nuno scans easily enough in the chants - but the fixture list has not been kind. A trip to Leicester is followed by home games against Nuno's Tottenham and Manchester United.

Lage is still familiarising himself with his surroundings. "I have spent my time between the hotel and the training ground preparing the sessions." There has been two of them a day, videos and plenty of meetings but he could be forgiven for feeling time is against him.

Even so, while he acknowledges that pre-season has been in two parts due to the number of missing players for the first three weeks, he is optimistic. "In the last two games against Stoke and against Coventry, I started to see the things that we are training," he says.

"Every manager is in the same position. We all want more time to work with the players. We don't have it so we need to start working. Day by day we are growing as a team, playing how we want. At the moment, I am happy with what we are doing."

And he is happy to be at Wolves.

"I do think this was the right moment and the right club to start working in the Premier League," he adds.

"When I came to the B team [at Benfica], I worked to be ready to be a first-team manager at Benfica or somewhere else. Now, here I am, 45, at a massive club in a massive competition with top players and top managers. Of course, this is very important for my career."

But what is success for Lage at Wolves?