Liverpool debutant Ibrahima Konate looked comfortable with the pace and physicality required in his first taste of the Premier League; plus: Ivan Toney shows Premier League quality but Norwich play into Watford hands 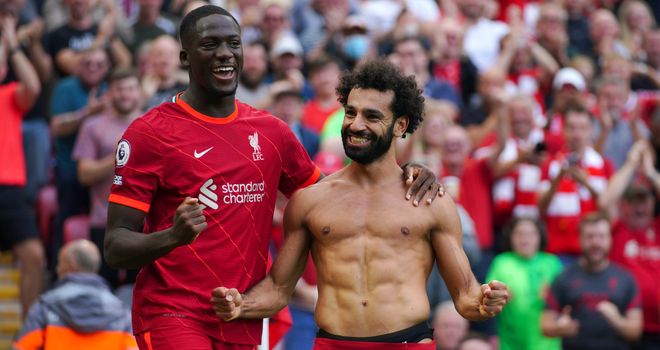 What a difference a season makes. Hard up at the back and barely able to name the same defensive partnership twice last season, Liverpool could afford to leave a fit Joel Matip and Joe Gomez out of their 3-0 win over Crystal Palace, and hand a debut to Ibrahima Konate at the heart of their backline.

Without knocking January signings Ozan Kobak and Ben Davies, Konate is in a different conversation - as his £36m price tag showed. He enjoyed some bright moments on his Anfield bow, and some others where he will need to improve, but most importantly looked comfortable with the pace and physicality required in his first taste of the Premier League.

Aside from his performance on debut, his inclusion highlighted how things have changed for Jurgen Klopp since last season. Konate is his only major summer signing but, without the horrific injury problems which dogged 2020/21, he was able to omit three of his first-choice back four, mainly using the game as a welcome chance to rotate, and still oversee a victory that took the Reds three points clear at the top.

It was not a glittering performance, but to use the manager's apt choice of words, certainly "hard-fought". You don't get the feeling Liverpool could have made sweeping defensive changes last season and come away with this scoreline, deserved or not. And that is why moving top of the table this early in the season feels more sustainable than it proved this time last season.
Ron Walker

It was all set up perfectly for another Arsenal stumble. Physical Burnley, hungry for a first victory of the season at Turf Moor, will have licked their lips as Mikel Arteta named an XI which only had Ben White and Gabriel Magalhaes as genuine physical presences.

The stage was there for Burnley to devour Arsenal's soft underbelly, to take them to places they seldom go, to exploit their all-too-familiar defensive flaws, but the Gunners had other ideas.

After outplaying Burnley on the ball in the first half and coming in a goal to the good thanks to Martin Odegaard's brilliant free-kick, we saw a new side to Arteta's Arsenal, one which has the hunger and concentration needed to overcome the task placed in front of them.

White and Gabriel stifled the threat of Chris Wood and Ashley Barnes, and their replacements Maxwel Cornet and Jay Rodriguez, in an assured and gritty defensive display.

When the back four were bypassed, Aaron Ramsdale proved an inspired last line of defence in the Arsenal goal, as he stretched his run without conceding to five games with an imperious performance.

And, crucially, fortune favoured them as referee Anthony Taylor reversed his decision to award Burnley a second-half penalty.

Arsenal made things hard for themselves by losing their first three games, but the corner has well and truly been turned. Back-to-back victories have lifted the mood and, with Tottenham on the horizon, things could get even better.
Jack Wilkinson Bailey announces himself to the Premier League

The game was meandering towards a stalemate by the hour mark, but Smith was able to call upon superior reinforcements that were spearheaded by the club's £25m summer recruit from Bayer Leverkusen.

He may not have played a role in Matty Cash's opener, but, as Everton buckled, it was Bailey who took the game away from them.

Having seen his devilish corner flicked into his own net by Lucas Digne, the Jamaica forward pilfered a goal of his own, and a first in front of the jubilant Holte End. 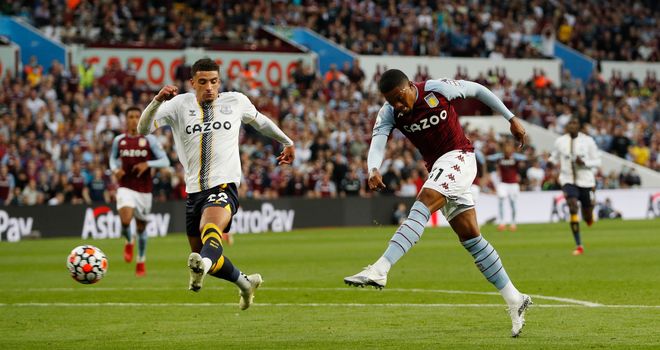 Bailey told Sky Sports: "To have my family there watching it, to have the fans chanting my name when I was going on, it's such a great feeling. I feel I've welcomed myself here as a Villa player."

His cameo performance was curtailed by a thigh injury soon after, but it is a sign of his importance that Smith was so eager to prevent further aggravation.

Following a mixed set of results that had not been reflective of Villa's performances in the opening month of the season, they are now in the top half. You sense it is where they will stay.

The early indications are that Villa have re-invested well on the £100m received for Jack Grealish. In Bailey, there is a new darling of Villa Park.
Ben Grounds Rafa Benitez's game plan was clear: sit deep and play on the break.

With Richarlison joining Dominic Calvert-Lewin on the sidelines, Everton sought to contain Aston Villa while using the pace of Andros Townsend and Demarai Gray on the counter-attack.

But he watched on helplessly, scribbling away frantically in his notepad, as his side were steamrollered by three Villa goals in nine second-half minutes.

This was a role reversal for both teams following last weekend's results; Villa somehow found themselves on the wrong end of a 3-0 loss at Chelsea while Everton's own second-half blitz overcame Burnley.

Here, their defensive mistakes were not something usually associated with a Benitez side, but the Everton back line looked unsettled without the presence of Jordan Pickford and captain Seamus Coleman.

Benitez rued missed opportunities and revealed it would be "at least one or two weeks minimum" before the pair are back available.

"What we cannot forget about us is that we are a team who finished 10th last season with a new manager," he rightly pointed out.

With 10 points from five games and in fifth spot, there is no need to panic, but Benitez will be concerned with the manner his side crumbled in the absence of key first-team members.

It is important those who are fit learn from this rude awakening if Everton's fine start isn't going to go to waste.
Ben Grounds

No need to panic with Dyche at the helm

If my memory serves me well, there has been a period in each of Burnley's Premier League campaigns where their top-flight status has not only been questioned but has been given a stern assessment. Five games into the current season, that moment looks to be here already.

Defeat to Arsenal confirmed a fourth Premier League loss for Sean Dyche's winless Clarets, who sit second-bottom in the table, just one point above pointless Norwich.

It took Burnley eight games to get their first victory on the board last season and a similarly slow start is without question a cause for concern at Turf Moor. And yet, while other clubs in a similar position would be entering crisis mode and potentially making rash decisions, Burnley calmly go about their business safe almost in the knowledge that they will get out.

Contrast that sense of security and faith to thoughts circling around Carrow Road at the moment, and you get a reminder - if you needed it - of just how important Dyche is to this Burnley project.

Yes, Burnley are winless and have not scored a goal from open play in five games this season, but with Dyche at the helm, now is not the time for fear.
Jack Wilkinson

A total of 52,698 were in attendance at the Etihad Stadium but the majority of them ultimately left disappointed on Saturday as Manchester City recorded just the one shot on target in their goalless draw with Southampton.

"I feel a bit guilty because we didn't play good," Pep Guardiola admitted in a match where VAR drama denied Southampton a penalty and then City a late winner.

It was an emphatic halt to a run of three 5-0 wins at home for City in the Premier League, while the flash points took the attention away from Guardiola's pre-match comments when he called for a greater attendance following the Champions League turnout in midweek.

City fans present at the Etihad on Saturday chanted Guardiola's name just before and after kick-off, and with the attendance more than it was against Norwich (51,437) and Arsenal (52,276), Guardiola will hope this matter is now put to bed.

It was an unwanted distraction for City in the build-up, and Guardiola will be reluctant to discuss it further given City's upcoming run of games.

After a Carabao Cup match at home to Wycombe, City face trips to Chelsea, PSG and then Liverpool - three games which could have a major say in how their season eventually plays out.
Michael Hincks

Ivan Toney's confidence was never in question going into his first proper Premier League season. "I can't wait to shut people up," he said after Brentford's play-off final win in May. Asked about Brentford's targets this year he told Sky Sports in August: "Winning the league."

The latter may be a reach, but he is achieving the former already. A goal and an assist in Brentford's 2-0 win at Wolves means he has scored 33 since the start of last season, more than any other player in the top four tiers of English football.

And those doubters who questioned whether he could cut it in the Premier League are awfully quiet - Toney is a Premier League striker with layers to his game.

He has picked up Sky Sports' man-of-the-match award three times in Brentford's five Premier League games and his player ratings read 8/10, 7/10, 7/10, 7/10 and 8/10, though Thomas Frank described his Molineux performance as 10/10. Even when Brentford have not won, he has been effective.

Toney is not the type of striker who touches the ball a handful of times and has to take his chance; he touched the ball 45 times against Wolves, the fourth-highest in Brentford's team, a rarity for a striker, helped by winning most of his 25 duels.

He comes short as Bryan Mbeumo runs off him, prompting Frank to compare the duo to Andy Cole and Dwight Yorke. High praise indeed.

But Toney's work is not restricted to the final third; winning a match-high four fouls against Wolves, he contributed to Brentford's management of the game - his numbers were the same against Arsenal on opening night - slowing it down, even with Wolves' numerical advantage.

Brentford have every chance of surviving comfortably with Toney and Mbeumo in town.
Gerard Brand

Against Watford, Norwich boss Daniel Farke opted for a more attacking line-up than the one he put out against Arsenal the previous weekend with Josh Sargent and Milot Rashica lining up alongside Teemu Pukki in a front three. It did not work.

Norwich's lacklustre performance against Watford was typical of how the Canaries have played this season. Very happy to push forward in numbers, but seemingly equally happy to leave gaps in behind, which played straight into Watford's hands. Pacey wingers Emmanuel Dennis and Ismaila Sarr unsurprisingly thrived in the open space they were afforded.

Farke said post-match he is fully aware his side need to improve defensively, but perhaps throwing Ozan Kabak straight into the starting XI for his Norwich debut was not the best idea when there is a League Cup fixture against Liverpool on Tuesday which looked a more suitable time to ease him in.

There is no doubting Norwich have talented attacking players and have good depth along the forward line, but Farke must be far more pragmatic if his side are to stand any chance of survival this season.
James Kilpatrick