Nuno Espirito Santo exclusive interview: Tottenham coach on the highs and lows of his start as he seeks improvement

In an exclusive interview, Nuno Espirito Santo discusses the tactical shift against Aston Villa that he hopes will prove a turning point for Tottenham. Watch Newcastle vs Tottenham live on Sky Sports Premier League from 4pm on Sunday; kick-off 4.30pm "It is my passion, it is my life," Nuno Espirito Santo tells Sky Sports. "Since I was 15, I have not done anything else. Every day is football."

Speaking before the game against Newcastle United on Sunday, three months into the job, he appears more focused than ever. That in itself is an achievement given everything that being Tottenham Hotspur head coach has thrown at him already.

Nuno's appointment just days before players reported back for pre-season marked the end of the club's chaotic manager search but not the end of the drama. Harry Kane's transfer saga provided an uncomfortable backdrop throughout the summer.

"Pre-season, different things happened. There were a lot of issues."

The football started with a surprise win over Premier League champions Manchester City and a satisfying victory back on his old patch Molineux. Top at the end of August, he was rewarded with the manager of the month award and suddenly there was hope.

But the international break brought confusion with three players left quarantining in Dubrovnik and three defeats in a row followed. The last of them, an emphatic one against rivals Arsenal, curtailed all optimism. Now there were doubts, even anger.

Spurs had to beat Aston Villa last time out just to bring some calm.

"In simple terms, I think we started well, then we did not perform so well," he says. "We had a big problem after the international break, we were not able to sustain it, and now we are trying to recover. I was really happy with the Villa performance.

"It has been up and down but I think we were able to recover that sense of what we wanted from the team against Villa. It was a very good game. But now, another international break, it is a new cycle coming. A tough schedule, a lot of games away from home."

Nuno is reflecting on events from a sofa in the reception area at Tottenham's training ground. He is in good spirits, having spent some time with his family, but poor health. There is a fist bump and an apology for the cold that leaves him feeling less than his best.

The news on Friday that two Tottenham players have tested positive for coronavirus is a reminder that the challenges keep coming. If Nuno is waiting for things to settle, it seems he is waiting in vain. Spurs travel to face Vitesse in the Europa Conference League in midweek.

"When you have this kind of schedule, you have to improve the team during the competitions. The training ground is all about recovering. They cannot be afraid of making mistakes on the pitch.

"Mistakes are going to happen."

Even so, supporters want to see signs of a clear style of play emerging, one they will enjoy. Scepticism about the new manager probably hastens the need for him to deliver it.

One wonders what the impact of Daniel Levy's words prior to his appointment, the insistence that the new Tottenham coach would embrace the club's historic demand for free-flowing football, might have had on Nuno. Is it influencing his thinking?

"With all due respect, it is not what guides me," he says, rather emphatically. "What guides me are the players, how to improve them so that we can achieve what our fans want. Working with the players in a progressive way is what moves me.

"We value all the opinions and the DNA of the club. But the job is about what we have. I think everybody would love to play attacking, attractive football, whatever. But to achieve that you need time, you need consistency.

"The first thing is to be able to create some routine. You can see it when the players train over and over again. That is when you create habits. Our job has been hard in that aspect because we have not been able to maintain the work that we want to do."

There is hope that the Villa result will be a turning point. It had to be after such a disjointed performance against Arsenal that left Nuno struggling to sleep. "During that time my thoughts were consumed with what we could change, what we could do," he says.

"We needed a change and a reaction."

The deserved 2-1 victory was the first time that his Tottenham team had scored twice in a Premier League game, their 17 shots also a season-high. There were hints of fluency.

"We were organised, we pressed really well. We were able to do something that we had not done before and that is to react well when we conceded a goal. We finished the game really strongly. The idea now is to recover the levels of performance shown against Villa."

It is a little ironic given the demands for attacking football that an ostensibly conservative switch helped spark such an improvement. Oliver Skipp came into the team in place of Dele Alli, playing as a natural holding midfielder alongside Pierre-Emile Hojbjerg.

"It worked really well. We were able to be more solid in the middle of the park with Skipp and Hojbjerg being side by side, although we still allowed one of them to have freedom to support in attack. It was the same idea but a little bit different and it worked better."

The greater control in midfield had advantages elsewhere too, with Sergio Reguilon and Emerson Royal encouraged to play with a little more adventure in the full-back positions.

"If you have a square, two centre-halves and the two midfielders, that can release the players in the wide areas while, at the same time, keeping the balance of the team." 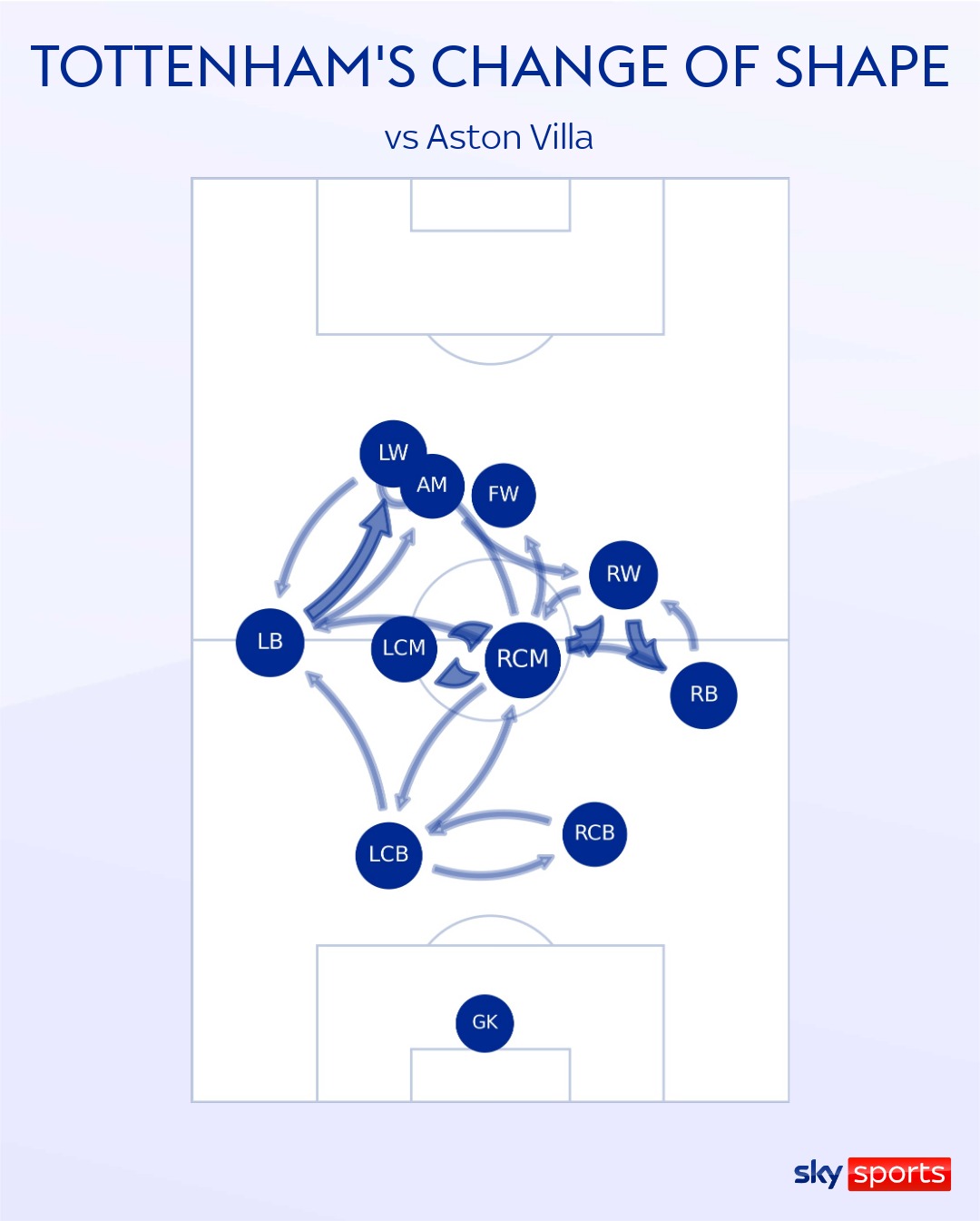 He is open to the possibility of further tweaks. A switch to three at the back, one that worked well for Nuno at Wolves, might allow Reguilon greater licence to attack, and would appear to suit Cristian Romero given that he played in that system at Atalanta.

"I think we have to be versatile enough to realise what the team needs in each moment. You cannot ask players to do it if you have not worked on it and we need time to work on it. When you realise you are not able to develop those routines, you cannot just try it.

"It is all about dynamics, the mobility to occupy different spaces, playing fast with the ball. These are things that we have to improve. The players have the talent so we have to push.

"Everything is about work."

Nuno's record as a coach might not put him among the top bracket - the three favourites for the Premier League title are all led by Champions League-winning coaches - but his achievements so far in his career suggest he makes the best of what is at his disposal.

There were best of the rest finishes with Valencia and Wolves, while he also took Rio Ave to seventh and finished second with Porto. He will not say this squad is the best with which he has worked but if he maximises their capabilities there will be few complaints.

"I do not know what the ceiling is for these players," he says.

"I do know they are very talented players with real space to improve."

It would be a fifth win in eight games if Tottenham can win at St James' Park on Sunday, matching the feat of Jose Mourinho and surpassing the start made by Mauricio Pochettino. It feels a little incongruous given all the fuss but it would represent a solid start.

The game will also mark 1000 games as a manager for Steve Bruce. His counterpart is not even halfway there yet but, given his work ethic, do not be too surprised if he gets close.

"You know me, I live day by day," says Nuno. "I know what I did today, I know what I have to do tomorrow. I do not think about after that. But, honestly, I do not see myself doing anything else."