Steve Bruce considering retirement as he leaves Newcastle 13 days after the club's takeover by a Saudi-led consortium; former Roma boss Paulo Fonseca has emerged as a contender to replace him as head coach; Graeme Jones will take charge on an interim basis 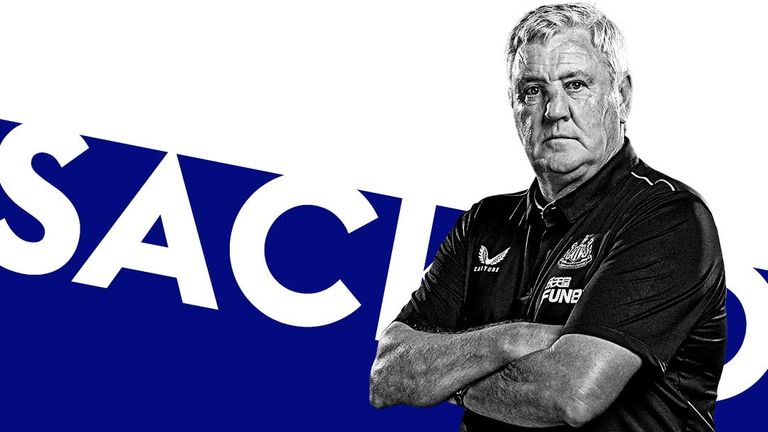 Newcastle sacked Steve Bruce on Wednesday after the 3-2 defeat to Tottenham and just 13 days after the Saudi-led consortium bought the club from Mike Ashley - but what caused the clamour for his departure?

Speculation ballooned over possible replacements after the club's sensational takeover was announced a fortnight ago, which indicated Bruce was on borrowed time at the helm.

However, the majority of Newcastle fans wanted Bruce out before the news broke - many aggrieved since his initial appointment back in July 2019.

Was the clamour and treatment justified? In terms of results, Newcastle have certainly had a bad start to the season: winless with just three points from three draws - leaving them sat 19th in the Premier League table.

Newcastle have only ever made a worse start to a Premier League season once, when Rafa Benitez's side picked up just two points from their opening 10 games in 2018/19, but went on to finish 13th.

There were glimpses of more attacking intent and a greater thrust upfield to help quash the widespread disdain at deep and negative tactics - but the efforts failed to silence the critics and fit the new vision for a new era.

The Magpies have shipped a league-high 19 goals and not kept a single clean sheet, while their forays into opposition territory remain scarce - compounded by concerns over a distinct lack of pressing in the middle of the park. 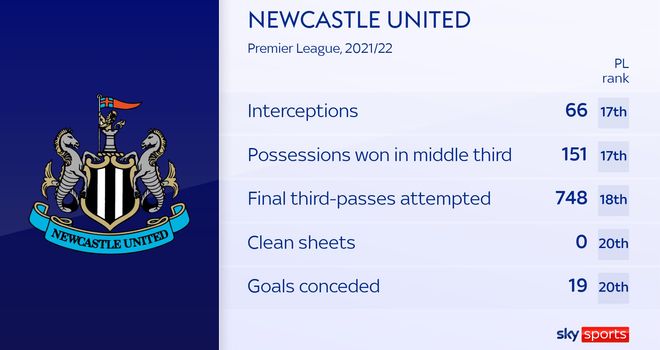 Having reached his landmark 1,000 game as a manager during the defeat to Spurs, Bruce was just three games shy of hitting a century of games in charge at Newcastle in all competitions, winning 28, drawing 28 and losing 41. 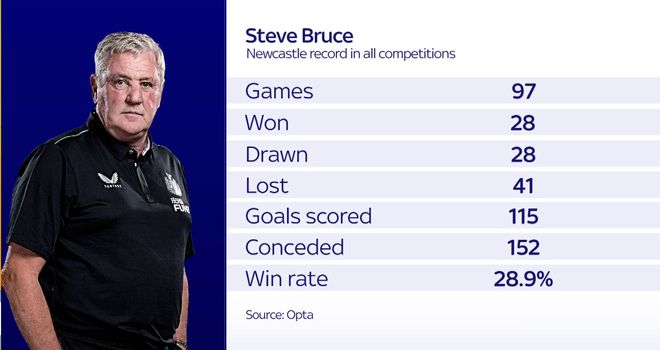 The chart below shows how that form unfolded in the Premier League, with a notable, sustained period of success in late 2019 before hitting more frequent lows in recent times, including in January this year and the current run of form.

Newcastle have won only seven of their last 35 league games since mid-December - only Southampton have fewer wins and points in this period - and conceded a league-high 65 goals during that time.

Bruce clocked the third-highest number of games in charge as a manager since the Mike Ashley era - behind only Alan Pardew (185) and Rafa Benitez (146) and ranks joint-fifth for win percentage with 29 per cent - excluding caretaker appointments.

Interestingly, Newcastle recorded almost perfect parity for Premier League results under Bruce and Benitez during their two full seasons in charge - which appears slightly disproportional to their polarised popularity among fans.

As the graphic below reveals, both managers collected 90 points and recorded almost identical numbers for games won, goals scored and possession averages - although the Magpies appeared less watertight during Bruce's reign. Bruce was notably cash-strapped during the Ashley era, spending £125m during his time at the club - which ranks fifth lowest expenditure in the Premier League during that period, among ever-present top-flight clubs.

The 60-year-old navigated a cauldron of issues on and off the pitch, weathered the financial constraints and shuffled a shallow squad to overcome extensive injury lists.

Both goalkeepers, almost all defenders, Isaac Hayden, Allan-Saint Maximin and Callum Wilson were laid off for long periods last term, while Martin Dubravka, Jonjo Shelvey and Wilson have been sidelined for four games or more this season.

Bruce certainly utilised the resources at his disposal - finishing 12th and 13th in his two seasons in charge to retain their top-flight status - but the new era begins at Newcastle, as Bruce himself considers retirement, just three days after reaching his managerial landmark.