Jurgen Klopp was supposed to be the template for Ole Gunnar Solskjaer but thinking he could replicate him owes more to faith than reason. Watch Manchester United vs Liverpool live on Sky Sports Premier League from 4pm on Sunday; kick-off 4.30pm 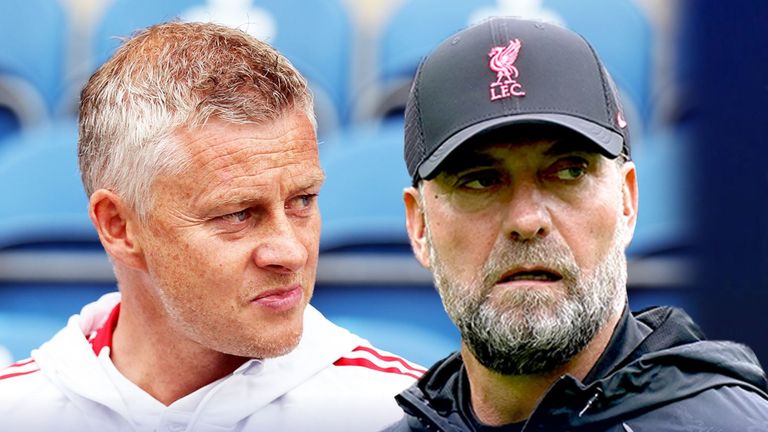 Sir Alex Ferguson used to be the go-to example when arguing why coaches needed more time because it took him three-and-a-half years to win that first trophy at Manchester United. Now Jurgen Klopp is held up as the template instead.

Like Ole Gunnar Solskjaer, the Liverpool manager won nothing in his first two full seasons in charge. Indeed, as Gary Neville pointed out on Monday Night Football in August, their records were "almost exact in terms of performance" during that period.

"The big thing is what happens next," said Neville. "I am sure Manchester United's backroom team, the board, are looking at it and saying, 'He is building something. This is what Jurgen Klopp was doing at Liverpool in his first three seasons'." It has not taken long for that defence of Solskjaer to date. Klopp's third full season brought the Champions League trophy back to Anfield and a 97-point Premier League campaign in which Liverpool were beaten only once. United have lost two of their last three.

Hoping that Solskjaer can take the next step with Manchester United has always owed more to faith than reason. Ferguson's pedigree was obvious, a man who had conquered Europe with Aberdeen, winning 10 major trophies, deserved resources, trust and time.

Klopp had twice won the title with Borussia Dortmund, already taking them to a Champions League final. He arrived at Liverpool as one of the most respected coaches in European football. There was little cause to question the journey on which he was taking them.

Solskjaer does not have that record and so needs to be making a more compelling case. Eight games into the Premier League season, having been heavily backed in the summer, United are adrift of their rivals and the need for evidence of progress is urgent.

This is the danger of the waiting game, the risk with the Klopp comparison. What happens if Solskjaer is not building what some supporters have convinced themselves that he is building? Time invested in a project that leads nowhere would be time wasted.

United have won four of their Premier League matches this season but only one of those performances was close to convincing. Fourteen points from eight games may not be enough to keep pace with those at the top of the table but it still flatters them.

The weakness in midfield is glaring, but the issues are fundamental. While Klopp's key signings improved the team, Solskjaer's recent additions have complicated matters. Jadon Sancho has struggled. Cristiano Ronaldo has not made them a more cohesive side.

Klopp instituted his pressing game quickly at Liverpool, thrilling fans even when the side was packed with players not good enough to win things. Once Mohamed Salah, Virgil van Dijk and Alisson were added, trophies followed, but the template was already there.

Pep Guardiola set about transforming a Manchester City team in need of new direction even while their possession game faltered in his first season. Once the defence was organised and City could control the counter-attacks, their dominance soon became total.

Thomas Tuchel committed to the 3-4-3 formation at Chelsea immediately, turning a team with a reputation for defensive fragility into perhaps the most robust outfit in Europe. Their knack for clean sheets carried them to Champions League glory within four months.

Each had an idea and improved upon it from there. Speaking earlier this week, Klopp agreed that the arrival of Van Dijk was crucial to Liverpool's progress. "There was always a basic idea but the better the players get the better football you can play," he explained.

But what is Solskjaer's 'basic idea' and how long should he be given to work it out? It is an awkward question because such is the quality in this Manchester United squad, there is a limit to how far they can fall. Special players will continue to do special things.

The chaotic comeback victory over Atalanta at Old Trafford on Wednesday evening proved that. Ronaldo will still score goals, David de Gea is still capable of making saves that others cannot. But the suspicion remains - United could be so much better than this.

The next six weeks should settle it one way or another. As Solskjaer himself noted after the defeat to Leicester, his side have developed a happy habit of digging out results whenever the situation looked dire. The fixture list suggests that resolve will be required.

This run of games in the Premier League, where only a trip to Watford punctuates a run of games against the five other clubs in what was once known as the big six, will surely shape their season. Even three wins might leave them outside of the top six by December.

That could lead to unfavourable comparisons with predecessor Jose Mourinho rather than Klopp, given that the Portuguese departed three Decembers ago - after a defeat to Liverpool - with United in sixth. There has been a net spend in excess of £300m since.

"With the signings of Cristiano Ronaldo, Jadon Sancho and Raphael Varane, recognised world-class talents, comes a pressure to deliver," said Neville. "You have to win a trophy when you are three or four years in and you have got players like that."

Solskjaer recognises that, although his response that he knows United must win a trophy "this season or the next" does buy him until the spring of 2023. Not only will Ronaldo be 38 but even Varane and Harry Maguire will have turned 30 by then.

Solskjaer's Manchester United vision must take shape far quicker than that. The problem is that, almost three years in, it is still far from clear whether that vision even exists.