Sky Sports' Nick Wright on Aubameyang: "He really looks to be struggling for confidence. He had five shots at Old Trafford, but there was a real lack of conviction in all those efforts." Watch Everton vs Arsenal on Monday Night Football, live on Sky Sports Premier League; kick-off 8pm

Pierre-Emerick Aubameyang's form has once again come into question, with the Arsenal captain on a run of five Premier League games without a goal ahead of his side's trip to Everton on Monday Night Football.

Aubameyang has had a torrid time in front of goal in recent weeks. His miss against Newcastle was labelled "unforgiveable" by former Gunners striker Ian Wright, while Arsenal's record goalscorer Thierry Henry suggested something was not right after the 32-year-old was substituted by Mikel Arteta with his side needing an equaliser in the final 11 minutes of their 3-2 defeat to Manchester United.

"Aubameyang is your captain. He is your goal scorer," Henry told Amazon Prime Sport after the game.

"You put him as your captain. 15 minutes to go, you're losing 3-2 and you take him off. 3-2 away from home, you need a goal and you take your captain, your symbol, off the field. You know he can score goals so something is not right there."

So, what is up with Aubameyang and should Arteta stick with him for the trip to Everton, which is live on Monday Night Football? Sky Sports football features writer Nick Wright spoke to the Essential Football Podcast to discuss Aubameyang's form and his recent struggles in front of goal...

"Aubameyang really looks to be struggling for confidence at the moment.

"He had five shots at Old Trafford, so he did get some decent service, but there was a real lack of conviction in all of those efforts.

"There was a fantastic chance at the back post in the second half when he was just eight yards out and had a free sight of goal. It was a poor effort and David de Gea made the save, and although Aubameyang's blushes were eventually spared by the offside flag, it underlined how the Arsenal skipper is lacking some of his usual confidence and composure in front of goal.

"There have been a few examples of that through the early part of this season as well.

"There was the chance against Newcastle when he hit the outside of the post from three yards out. There was the episode against Watford where he slid in and tried to steal a goal from Martin Odegaard when he was clearly in an offside position.

"He also missed a penalty against Watford and saw a spot kick saved by Aston Villa goalkeeper Emiliano Martinez, before converting the rebound." 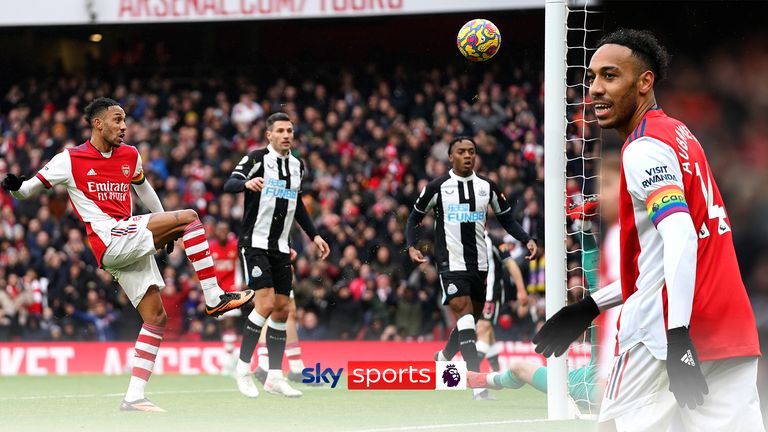 Wright added: "Clearly, he's not quite at it at the moment and the problem with a player like Aubameyang is that if he's not scoring goals, he's not offering the team a huge amount else.

"He's very much a low-touch player. He's not someone who drops deep and links the play.

"He doesn't offer a great deal in that sense.

The Manchester United game was frustrating because I thought Arsenal could have got something out of the match. They played some really nice, slick football at times, but they are missing a centre forward. Aubameyang is nowhere near the player he was and that’s a huge problem for them.

"So, when he's not scoring, it does feel at times like Arsenal are almost having to carry him and perhaps they could do with a striker who offers them a bit more in the position.

"It's a real worry for Mikel Arteta and Arsenal again because it did look like he'd turned a bit of a corner earlier in the season.

"The last few games have shown that the captain's form is a real cause for concern."

All the top stories and transfer rumours from Friday's national newspapers, including Arsenal reportedly plotting a £60m move or Everton and England striker Dominic Calvert-Lewin.

What has Arteta said? 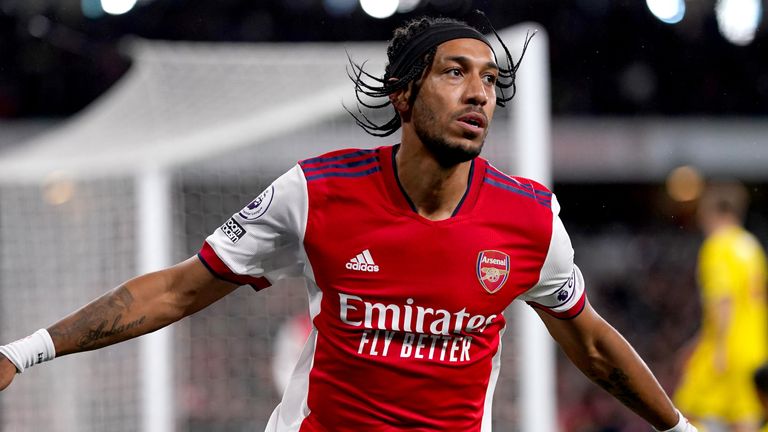 Speaking before Arsenal's defeat to Manchester United, Gunners boss Mikel Arteta insisted that Aubameyang has not lost his touch in front of goal, despite his run of games without scoring in the league.

"To put the ball in the net or not can be a difference of millimetres or by a second: Auba has that capacity and hasn't lost that capacity," Arteta said.

"What he cannot lose is the rest of his game. He cannot think: 'I'm going to do a little bit less of that now to score more goals.' It doesn't work like that. It works the opposite way round.

"The form of Auba will always be related to the goals he scores," he added.

"There are many other things apart from goals, but obviously we need that contribution because his goals are critical for our success.

"That's been shown in the last few years when we weren't able to do that. That has to be his aim, to continue to do the things he's doing and then at the right moment, put the ball in the net."

“Do you see the way he runs, the purpose he has to press the ball, and when he takes it his movement, his link, how is leading the game – that is when he is changing the rest, not when he is static and then he puts the ball in the net. I prefer this Auba.”

'Aubameyang's dip in form has gone on too long'

"Aubameyang just does not look like the same player.

"I know what it feels like to be a centre forward when you are going through a rough spell. Sadio Mane at Liverpool said last year that he spoke to psychologists about his dip in form, but Aubameyang now has had this dip in form for about two seasons.

"It's almost been going on too long.

"I like Aubameyang as a player but since he signed his new deal at Arsenal, it does seem like his form has completely dipped and it's hard to see why.

"These are the types of players Arsenal need to step up.

Martinelli? Lacazette? Nketiah? What are the alternatives for Arteta?

"A lot of Arsenal supporters would be happy to see Gabriel Martinelli given a chance through the middle after his performances in the last couple of games against Newcastle and Manchester United.

"He was really impressive at Old Trafford, especially late on when Arsenal were trying to push for an equaliser. He was the one trying to make things happen, driving at the United defence.

"Alexandre Lacazette is another option, but the question is whether he gives you the guarantee of goals. He hasn't been performing consistently for Arsenal this season or over the last couple of seasons in terms of his output.

"And then, there are the issues surrounding his future, with his contract set to expire at the end of the season.

"It was also pretty bizarre to see Eddie Nketiah come on at Old Trafford. This is a player who has rejected a new contract offer at the club, stating he wants to leave when his deal expires in the summer, and he was the one chosen to go on for the final 10 minutes by Arteta when Arsenal needed a goal.

"Arteta still had Nicolas Pepe on the bench as well. He had other options there and he chose to turn to Nketiah, which was a strange decision.

"So, perhaps Arsenal don't have amazing options for the striker position beyond Aubameyang, but there are things Arteta could do.

"He will obviously be wary of dropping Aubameyang. It would be a big decision and he will be aware of the fall-out that would come alongside dropping his captain.

"I suspect he will stick with Aubameyang for a little while longer but certainly, they need to get his confidence back. They need to keep providing him the service and hope he can start putting some of these chances away."

Can Auba return to form against Everton?