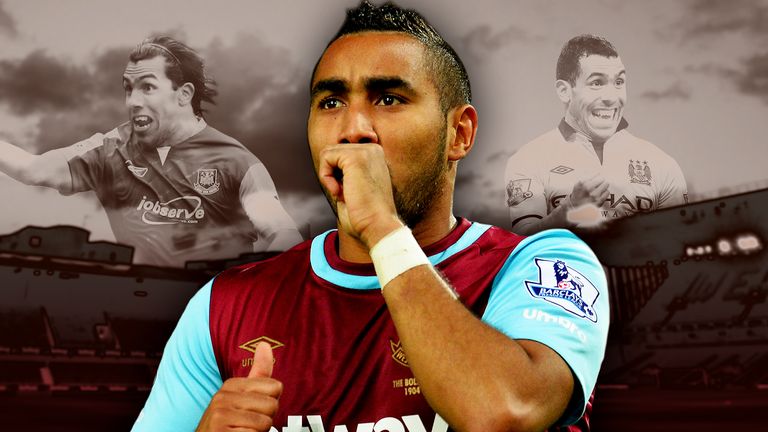 In Dimitri Payet, West Ham finally have a player with the flair to excite like Carlos Tevez, writes Nick Wright...

After watching Dimitri Payet dismantle Newcastle with a match-winning, two-goal performance at Upton Park, Neville was reminded of his former Manchester United team-mate.

"Just because of the size and stature of him and the way in which he plays, he's a little bit like Tevez," he said. "He's almost bull-like, with big strong thighs and upper body."

The similarities are not just physical, either. "He's always involved in the game," added Neville. "It's not just the actual skill and the goals. He actually looks like he works hard and he's playing almost street football. He'll just go and chase after the ball."

Monday night's performance was the latest in a string of eye-catching displays from Payet since his arrival from Marseille in the summer. He tormented Arsenal and Liverpool, and against Newcastle he was even better. The 28-year-old has been a whirlwind success. West Ham are fifth, and the £10.7m fee already looks like a snip.

It's fitting that Neville's comparison with Tevez came ahead of West Ham's trip to Manchester City on Saturday Night Football. The all-action Argentine wrote himself into the Hammers' history books with that famous goal at Old Trafford to save them from relegation in 2007, and he is also remembered fondly at the Etihad Stadium.

City embraced Tevez as one of their own after his acrimonious move across Manchester in 2009. His four-year spell was interrupted by a bitter falling out with Roberto Mancini, but he returned to the fold in the 2012/13 season before departing for Juventus after 78 goals in 148 appearances for the Citizens.

Payet has a long way to go to replicate Tevez's success in English football, but he is already exciting West Ham fans in a way few players have since the striker's departure eight years ago. "That power, that pace seems ideally suited to the Premier League," said Sky Sports pundit Jamie Carragher. "He looks like a great signing." 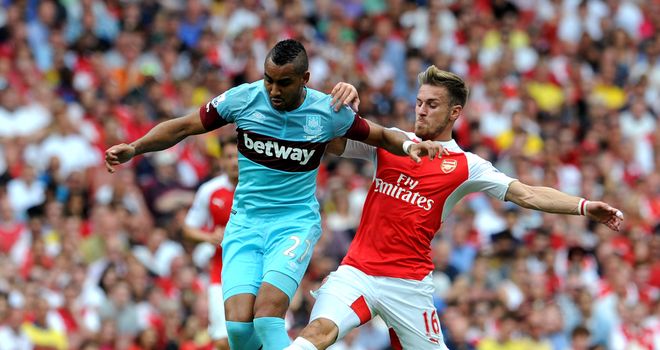 Payet holds off Arsenal's Aaron Ramsey at the Emirates Stadium

Like Tevez, Payet combines thrilling flair with a tireless work-rate. Neville referenced "street football" when discussing the France international on Monday Night Football, and he certainly didn't shirk the grittier aspects of the game against Newcastle.

When he wasn't running riot in the opposition half, Payet was harrying defenders and mucking in at the back. The statistics show Cheikhou Kouyate was the only West Ham player to make more tackles and interceptions combined.

"That power, that pace seems ideally suited to the Premier League. He looks like a great signing."

Payet has had more touches than any of his team-mates this season (330), but he is also putting in the hard yards off the ball. His industrious performance against Newcastle was not unusual. Premier League tracking data reveals Kouyate and Mark Noble are the only West Ham players to have run further than Payet this season, and his 54.24km covered puts him inside the Premier League's top 20 runners.

Payet's beautifully-taken goals against Newcastle showed just how deadly he is in front of goal, and then there's the creativity. So far this season only Santi Cazorla, Mesut Ozil and Eden Hazard have created more than his 16 chances, and against Steve McClaren's men he played seven key passes - three more than any other player on the pitch. He was head and shoulders above the rest. 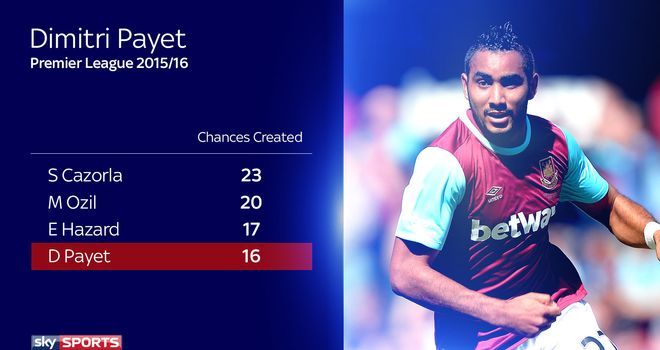 Only three players have created more chances than Payet this season

Slaven Bilic is understandably delighted. "He's not only a great player who is deciding games but he makes all players around him play better," the West Ham manager told Sky Sports after Monday's game. "That is the most important thing you want in a footballer; someone who is not only an individual but a team player."

Payet's instant impact shouldn't come as a surprise. After all, his stats last season were extraordinary. No player in Europe's top five leagues came close to the 134 chances he created for Marseille, and his total of 17 assists was only beaten by Kevin de Bruyne, Cesc Fabregas and Lionel Messi.

Payet's excellent early form contrasts sharply with the more muted impacts of some of the other expensive new arrivals in the Premier League. Newcastle trio Georginio Wijnaldum, Florian Thauvin and Aleksandar Mitrovic have all struggled having cost more than the Frenchman, while Xherdan Shaqiri has started slowly at Stoke and the £10m Jordan Ayew has been a peripheral figure at Aston Villa. 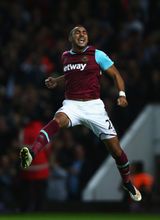 Carragher, however, insists the best foreign players often hit the ground running. "The [idea] that it takes a year for foreign players to settle in, I've never bought into that at all," he said on Monday Night Football. "I think Payet is the perfect example. We saw it in the first game against Arsenal. He's been one of the players of the Premier League.

"You consider the prices paid for some players who don't deliver, and you see what he's delivered. Of course, some players take a few months before you see them at their best. But a lot of the great foreign players who have come to this country start right away and show you what they're about." 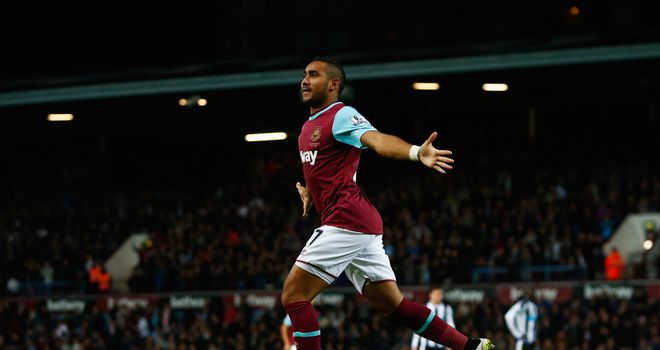 That is one area in which Payet has a head start on Tevez. While the 31-year-old was eased into English football slowly as a youngster at West Ham, Payet has been thrown into the thick of the action having accrued a wealth of experience in France with Nantes, Saint-Etienne, Lille and Marseille.

Payet has made at least 30 league appearances every year since he was 19, and now he looks more than ready to take his chance in the Premier League. But while Tevez made his name by saving West Ham from the drop, their new hero will be hoping to fire the Hammers to new heights.

Three huge games, one massive weekend. Watch live without a contract from £6.99 on NOW TV