Liverpool vs Man Utd: The selection dilemmas and likely XIs ahead of Anfield clash

The fitness of Joel Matip and Naby Keita could have a key impact on Jurgen Klopp's Liverpool line-up, while Victor Lindelof and Paul Pogba may give Ole Gunnar Solskjaer a conundrum for Man Utd. Watch Liverpool v Man Utd live on Sky Sports Premier League from 4pm on Sunday; kick-off 4.30pm.

Which players are set to start on Sunday, when Liverpool host Manchester United in their huge Premier League clash at Anfield?

Sky Sports News reporters Vinny O'Connor and James Cooper joined Peter Smith on the Pitch to Post Preview Podcast to bring us up to speed with the latest team news and injury concerns ahead of the crunch clash between the league's current top two.

They also shared their views on which selections the respective managers may lean towards for the big showdown...

"Liverpool have taken advantage of a nine-day break before this game. Jurgen Klopp made it clear ahead of the Aston Villa FA Cup game the lads were going to get a few days off and that's how it has panned out. They were back in on Wednesday for training and their preparations for the game are building up.

"But on top of that, they've been doing everything they can to get Joel Matip fit. Before the Aston Villa game, Klopp said he wasn't sure he would be recovered from his groin injury in time for Man Utd or whether it would be a few days after that.

"Centre-back is the key area and it affects the whole team because when you look at the XI Klopp put out against Southampton, Jordan Henderson dropped back to centre half alongside Fabinho, and with them playing at centre half you're missing two massively influential figures in that engine room. 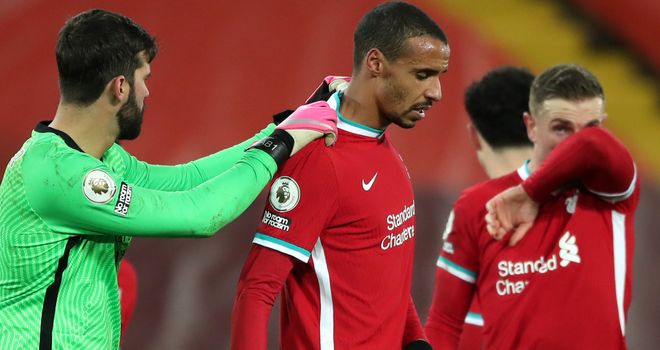 Joel Matip has been struggling with a groin injury

"If Matip is fit then it's relatively straightforward: he would partner Fabinho at the centre of defence, you'd have Trent Alexander-Arnold at right-back and Andy Robertson at left-back, which would enable Henderson to fill the holding role in midfield and then you've got the selection of probably Gini Wijnaldum and Thiago Alcantara.

"If Matip isn't fit - does he drop Henderson back again or does he leave one of the youngsters to fill that role?

"Nat Phillips and Rhys Williams have done OK when they've been asked to in the Premier League - but against Man Utd, and their attacking threat, maybe it's another step up and another challenge they'd have to rise to.

"Obviously the front three picks itself, with Diogo Jota still injured, and we'll wait and see whether Naby Keita can offer another option in midfield.

"But the key issue is Joel Matip - because it affects the balance elsewhere of the entire team." 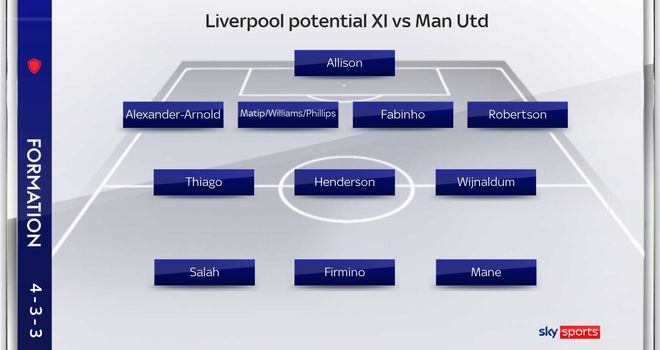 Jurgen Klopp has a decision to make at centre back, depending on the fitness of Joel Matip

"When Anthony Martial was taken off against Burnley, it looked precautionary to me. It looked as though he'd got a little pull and Ole Gunnar Solskjaer thought, 'this one might be in the bag and we need him at the weekend against Liverpool'.

"The other issue and problem for him is at centre back and whether Victor Lindelof is fit enough with that back injury.

"Eric Bailly's form has been good, although Man Utd fans will tell you, in the big games - and you remember PSG last season - he has a ricket in him. It's something he's eliminated from his game so far this season, but most Man Utd fans are just maybe a little worried, going into a big game like this, that Bailly and Maguire are the two centre-backs.

"Although, Bailly does give you a bit more pace than perhaps Lindelof does.

"I think he'll go with legs in midfield with Fred and Scott McTominay in midfield. They seem to be his go-to for the big games.

"Then, if you're going to play that formation with the three attackers and then the one striker, Martial, if he's fit, becomes the one down the middle, with Marcus Rashford probably on the right - although he doesn't like being on the right - Bruno Fernandes in the middle and Paul Pogba on the left.

"I don't think he will [try to play Edinson Cavani, Rashford and Martial] because he'll want to accommodate Pogba. Most United fans would say they've seen the best from Pogba playing on the left at the moment.

"That's probably what he's weighing up - whether Pogba plays, or whether it is Cavani through the middle and Martial on the left, or perhaps even Mason Greenwood.

"But Ole has rotated and rested really, really well so they're fresh for a game like this." 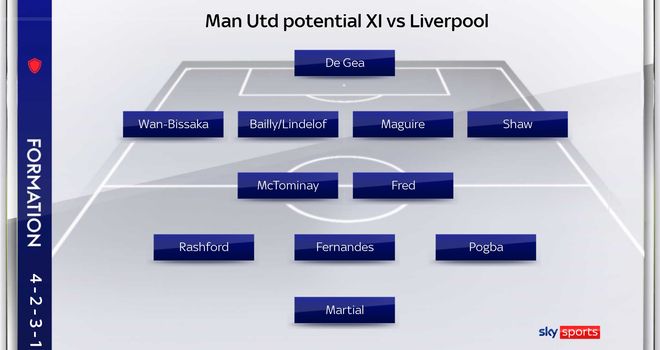