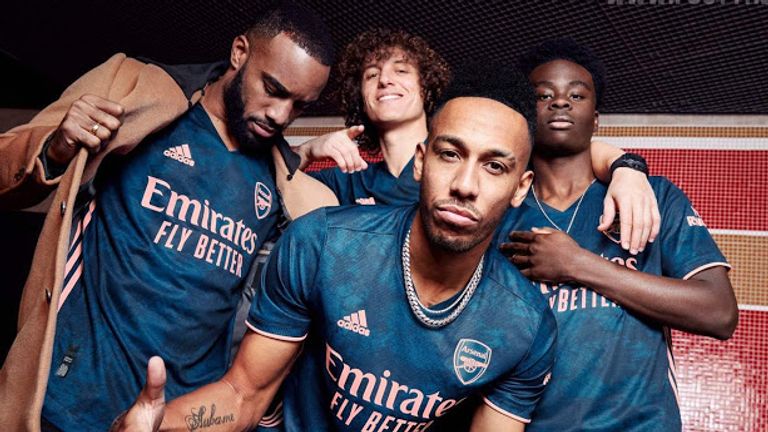 Premier League clubs are showing off their new kits for the 2020/21 season.

From retro designs to bold, graphic prints, keep track of all the fresh looks as they are released.

Manufacturer Adidas have retained the iconic red shirt with white sleeves, but the body features a chevron graphic which is inspired by the 'A' within. There is also a nod to the layout of the tiling on the floors of the famous East Stand at Arsenal's former Highbury home.

Adidas has also revealed Arsenal's away kit for the 2020/21 season, a marble-influenced shirt with hand drawn design, inspired by the club's iconic East Stand at Highbury.

Famous for its prestigious marble halls, Highbury was Arsenal's home from 1913, although the art deco East and West Stands were reconstructed in the 1930s. Listed by the time Arsenal moved to Emirates Stadium in 2006, parts of the stands were retained in the housing development that replaced the stadium, including the facade of the East Stand which was famed for its marble interior.

The new kit replicates the natural pattern of the marble in maroon and black print on white.

Arsenal have also released their new third strip, which will be worn on the pitch for the first time in the Premier League season opener against Fulham on Saturday.

The new shirt colours represent the lights and atmosphere that illuminate the Emirates during a night match. The shirt pattern was created from a custom set of tie dye prints.

After securing Premier League survival, Villa released their new home kit on August 1, sticking with Kappa as the kit sponsor and changing to Cazoo as the club sponsor.

It's the classic claret and blue design, featuring dark pinstripes down the body, with white shorts and blue socks.

Featuring a Stadium and Pro edition of the shirt, the latter is dedicated to elite performance, according to the club. Brighton released their new 2020/21 home kit before the end of last season, and wore it on their final day win against Burnley.

The Nike shirt is inspired by a design previously used in 1983/84 and 1993/94 for two seasons each time, with a solid blue shirt and white pinstripes. It will be paired with white shorts and blue socks.

Brighton's away kit is a 1980s-inspired yellow and blue number, which was worn in a pre-season friendly against Chelsea. 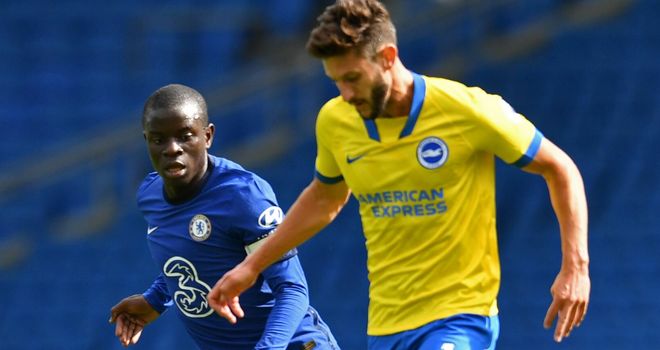 Burnley's new home kit takes inspiration from the one worn by one of the greatest squad of players in the club's history: the 1920/1921 League Championship winners of 100 years ago.

Developed by Umbro, the home shirt features a blue collar with a stylised 'cut' neckline, while the traditional blue sleeves sit lower on the arm. Nike says Chelsea's new home and away kit feature the club's new sponsor, telecommunications company Three, and is inspired by London's "long association with master tailors and their exquisite craftsmanship".

The blue home jersey features a herringbone pattern, as well as a dark blue round collar and sleeve trim. The navy trim extends down the side of the shirt and shorts, while the socks are white.

The away jersey, meanwhile, "adds an injection of millennial swagger - perfect for the confident, emerging talents lighting up Stamford Bridge under head coach Frank Lampard", it's claimed. Nike have released Chelsea's away kit for the 2020/21 campaign

Chelsea's third kit draws inspiration from the 1990s, with Nike also taking a leaf out of the design of the original Nike Air Max 180 from that era. The colour combination is described as ultramarine, ember glow and white to reference vintage Chelsea away kits. 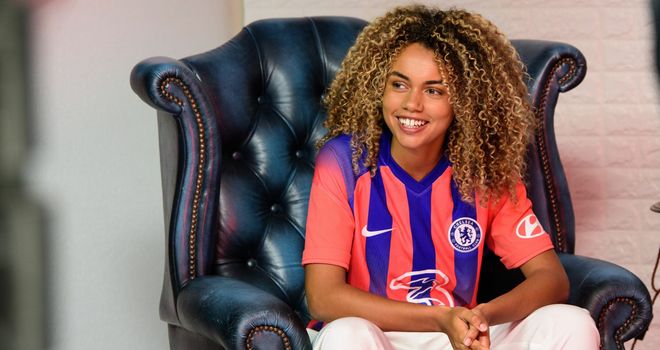 Chelsea's new third kit was designed with a '90s vibe' in mind, including a nod to the Nike Air Max 180 shoes

Crystal Palace and Puma have kept it symmetrical for 2020/21; all three kits share the same design pattern - with stripes rising up the chest - for the first time since their promotion campaign of 2012/13.

The Eagles' away kit is white, while a black number will serve as their third strip.

Everton have unveiled their 2020/21 home strip from new kit-maker hummel.

The Toffees' traditional royal blue jersey features hummel's chevrons across the shoulders and sleeves and pays tribute to the club's iconic Z-Cars anthem with an image of the song's soundbar embossed diagonally across the shirt. Shorts and socks are white, with blue chevron contrast.

The Toffees' away kit is a classic amber and blue design inspired by the second strips worn in the late 1960s and early 1970s, while their third kit is described as a "seafoam" colour.

Leeds are back in the big time after 16 years say and their new adidas home kit is a crisp white design with royal blue stripes on the sleeves.

Leeds' away kit takes inspiration from its change strip from 1994-96, with the club saying they hope to bring back memories of Tony Yeboah's opening-day volley winner against West Ham on the opening day of 1995/96 and his UEFA Cup hat-trick against Monaco by recreating the blue-and-green-striped shirt. Premier League shirts will carry the words 'Thailand Smiles With You' - a club initiative to support the country's recovery from the pandemic - while 'King Power' will feature on the front of shirts worn in cup and European competition.

Leicester have released two alternative kits - in maroon and white.

Premier League champions Liverpool have unveiled their home and away kits for next season, which are the first of their new partnership with Nike.

Virgil van Dijk said: "Stepping out as champions next season in this kit will be really special."

Liverpool's away kit is teal, with the shirt featuring a graphic print and black detailing. The shorts are plain teal, with a black stripe down the side. Liverpool's third kit, released on the eve of the season, is a black and charcoal grey checkerboard design, which the club say is inspired by famous European away nights.

All three shirts feature a '96' emblem, encased by eternal flames, on the nape of the neck, in memory of the 96 children, women and men who lost their lives at Hillsborough.

The kit is completed with white shorts and light blue socks.

The away shirt features a dark blue and black shirt with copper detailing, while the third kit is an eye-catching pastel paisley number. 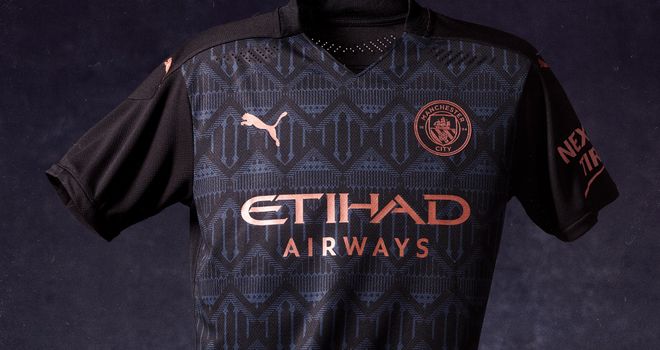 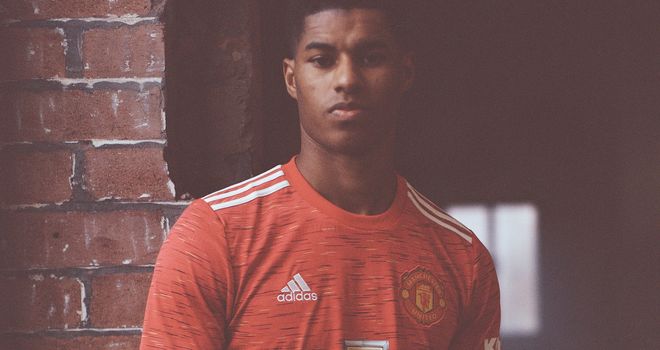 Manchester United's new home kit is inspired by the club's crest, utilising gold and black lines on the famous red jersey. The badge will return to the traditional colours of red and gold with black trim after a switch to a gold badge on a black background last season.

The inspiration comes from the "Manchester United DNA" which has been a focus for manager Ole Gunnar Solskjaer with white stripes down the arms and a rounded neck.

Man Utd's away kit features, they say, a 'legend earth green' pattern, made up of an intricately hand-drawn and painted design.

Their third kit is a striking zebra-style affair with red trim and collar detail to mark 110 years at Old Trafford.

Newcastle United have revealed their fresh Puma kit for 2020/21. The Magpies wore it for the first time in their final-day assignment against Premier League champions Liverpool.

The Magpies will be in yellow on the road for the first time since 2013/14, with a patterned 'fizzy yellow' shirt featuring a peacoat blue stripe across the shoulders.

The club's new third kit is an eye-catching 'prism violet' design, featuring a bold pattern based on the steelwork of the famous Tyne Bridge.

Sheffield United's home kit features the club's iconic red and white stripes, with the addition a white panel at the top of the shirt and along the arms.

A new-look shirt collar will also now be in black, as will the shorts, while the socks will be red.

The Blades will catch the eye on the road; a light pink shirt and socks are paired with grey shorts. Kitmaker Under Armour has marked Southampton's 135th anniversary with the return of the club's iconic sash kit first worn back in 1885.

The new strip - featuring a white sash on a red shirt - was worn in a final-day win over Sheffield United.

Southampton's away kit harks back to the navy colour used for the team's shorts and socks throughout much of its early history, from 1891 all the way through to 1950. Accents of yellow and solent blue are a nod to the club's 1976 FA Cup final victory. A traditional white home shirt this year features a knit pattern, with blocks of blue on the shoulder and a yellow pinstripe around a v-neck collar. Blue shorts and white socks - also with yellow accents - complete the look.

A dark green away kit features flashes of neon pink and yellow. 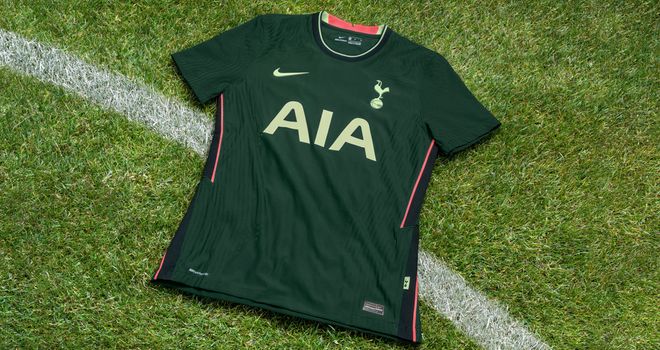 Tottenham's third kit returns to a yellow reminiscent of famous Spurs kits of the past - including their FA Cup Final victory in 1982 - with Nike also including a link to their own Air Max 95 shoes.

Newly-promoted West Brom are with Puma again, and for the third straight season have opted for a green and yellow away shirt, along with a different take on navy and white stripes for their home kit.

Both shirts feature the 'barcode' design, reportedly drawing inspiration from one of the club's most popular seasons, the 1992/93 promotion from Division Two, and the third kit follow suit; there will be no missing the Baggies in this red and yellow number.

The new West Ham home kit for 2020/21 celebrates the club's 125th anniversary with a classic design. The Umbro shirt features a claret body with blue sleeves and a blue crew-neck collar, as well as a commemorative two-colour crest. Shorts and socks are white.

The Hammers' away kit is inspired by the Club's golden period of the 1960s and features two claret bands on blue, while the club's third kit is black with gold detail. Wolves away shirt features an unusual cloud design with more familiar gold and black trim, while their third kit is green with red trim.