Man Utd have lost three of their last four games following Saturday's 1-0 defeat against Aston Villa; Ole Gunnar Solskjaer has problems to solve in defence, midfield and attack ahead of Wednesday's Champions League clash with Villarreal 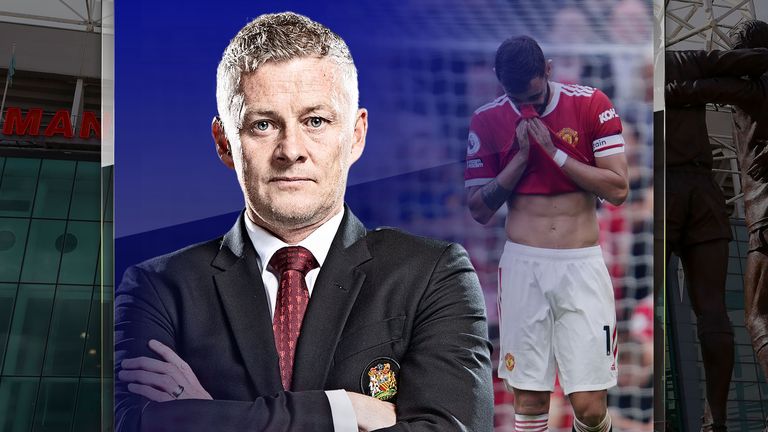 When Bruno Fernandes's penalty sailed over the crossbar at Old Trafford against Aston Villa on Saturday, Manchester United's unbeaten start to the Premier League season went with it.

After the euphoria of Cristiano Ronaldo's second debut, when he scored twice in United's 4-1 thrashing of Newcastle earlier this month, recent results have served as a reality check.

United are still only one point off the top of the Premier League, the 1-0 loss to Aston Villa was not immediately costly in that sense, but the pressure is on after three defeats from four games.

Wednesday's Champions League clash with Villarreal has taken on added significance after the shock defeat to Young Boys and, having also crashed out of the Carabao Cup against West Ham, Ole Gunnar Solskjaer has problems to solve ahead of a daunting run of fixtures which includes Liverpool, Tottenham and Manchester City. 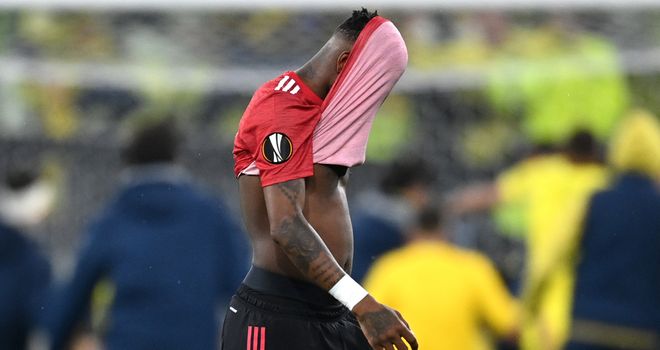 Fred shows his dejection during the defeat to Young Boys

Amid all the excitement around Ronaldo's return to Old Trafford on the final day of the transfer window, there was little discussion of Manchester United's failure to strengthen their midfield.

But a month later, the side's faltering form has brought the issue back into focus. United have bolstered their defence and attack but the area in between remains a major weakness.

It is four months since Roy Keane delivered his brutal verdict on Fred and Scott McTominay - "as long as them two are playing in midfield for Manchester United, they will not be winning big trophies," he said - but few argued with him then and nor would they now.

Saturday's loss to Aston Villa was just the latest example of why.

United had nearly 60 per cent of the possession at Old Trafford but Solskjaer found himself bemoaning a familiar issue afterwards: "We didn't have enough control." 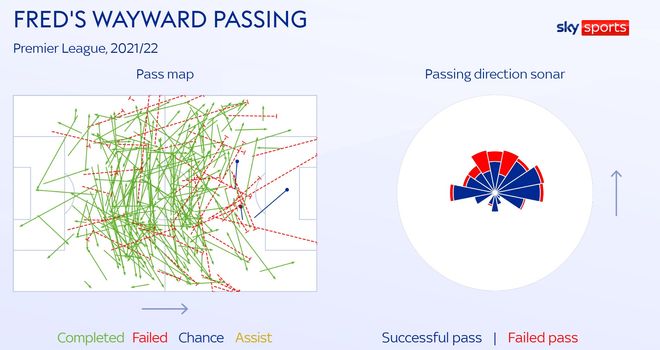 That lack of control stemmed from midfield, where Fred and McTominay offered neither defensive security nor attacking impetus.

In fact, they were largely bypassed altogether - both by Villa, who carved through them with ease on several occasions, and their own team-mates, who frequently looked towards the flanks instead.

By the end, the pair ranked fifth and eighth respectively among United's starters in terms of touches, those numbers representative of the side's inability to build attacks through midfield.

Indeed, of Fred and McTominay's combined total of 54 successful passes in Saturday's game, only six went to Bruno Fernandes while only four found their way to Ronaldo.

United lack the quality of their rivals in a key area of the pitch and there is no obvious solution available to Solskjaer.

Paul Pogba could be moved back into a deeper role but for all his undoubted talent, questions remain over whether he has the tactical discipline to operate in a midfield two against top opposition. United's only other options in the position are an ageing Nemanja Matic and an out-of-favour Donny van de Beek. Bruno Fernandes reacts after his missed penalty against Aston Villa

A lack of cohesion is causing problems in attack as well as midfield.

Ronaldo's return thrilled supporters, his immediate impact adding to the sense of optimism around the club, but there remains a lack of clarity around United's playing style and approach.

"United still look like an ensemble of brilliant individuals in need of being moulded into a collective force," said Sky Sports pundit Jamie Carragher in his Daily Telegraph column earlier this month.

Gary Neville, meanwhile, described them as "a team who win games in moments" on Saturday. "You need patterns of play; you need a way of playing," he added on the Gary Neville Podcast. 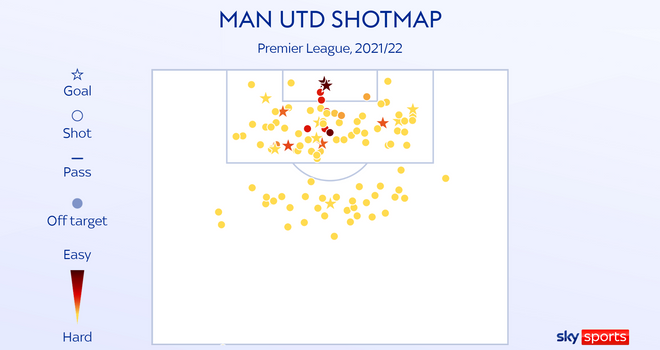 Solskjaer can of course point to a goal total second only to Liverpool's in the Premier League this season but United's most recent performances are perhaps more indicative of the reality.

Against Villa, they had 28 attempts but the combined expected goals value of those attempts - excluding the late penalty missed by Fernandes - was just 1.31. In other words, the vast majority of them were speculative efforts rather than clear opportunities.

Manchester United's attack looks more like a group of soloists than a proper unit and while Ronaldo's goalscoring impact has underlined his enduring effectiveness, there is much work to do to create an effective partnership with Fernandes.

Ronaldo's countryman, outstanding in the No 10 position last season, only found him with two passes against Villa and only three in the previous Premier League game against West Ham.

They must build up a better understanding and it would certainly help if there was a defined style of play in which to operate.

A team averaging nearly 60 per cent possession cannot rely on counter-attacks and individual moments of brilliance. Jadon Sancho was an unused substitute against Aston Villa

Solskjaer must also find a way to get more from Jadon Sancho.

The 21-year-old, a £73m signing from Borussia Dortmund, has only played 202 Premier League minutes so far and didn't even make it off the bench when United were chasing a goal against Villa.

Sancho is yet to score for his new club but what's more troubling is that his numbers for shots, chances creation and dribbles have all dropped dramatically. 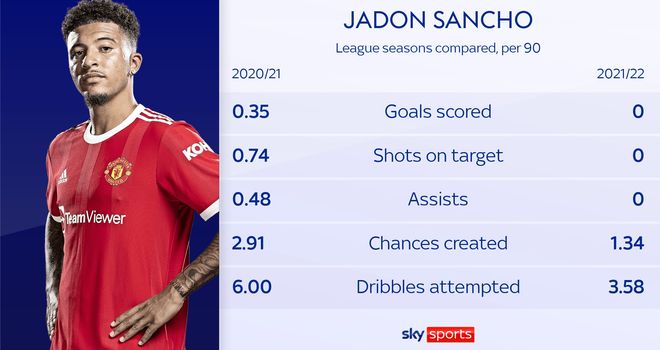 It is not unusual, of course, for a young player to need time to settle into new surroundings but suddenly the circumstances at Old Trafford do not look ideal for Sancho.

Recent evidence suggests Ronaldo is likely to start almost every game at centre-forward and that intensifies the competition for the other spots in the front three - especially with Paul Pogba now playing on the left and Marcus Rashford nearing a return from injury.

Sancho is therefore tasked with finding form while not playing anything like as consistently as he did at Dortmund - and while adapting to a different team and league. 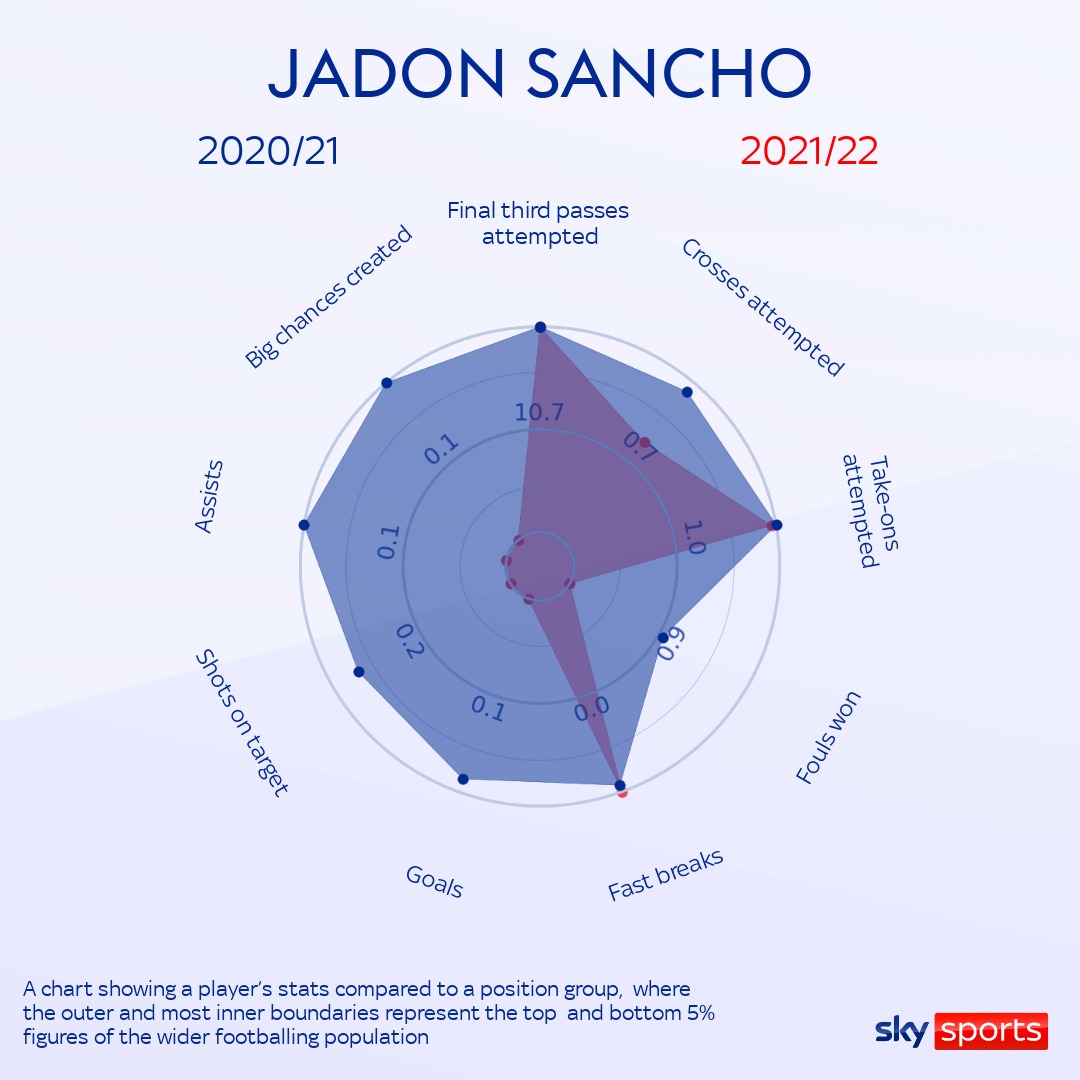 He is also having to adapt to seeing less of the ball. Sancho averaged 83 touches per 90 minutes for Dortmund last season but that number stands at just 68 per 90 minutes at Manchester United.

That may explain, in part, the drop in his output.

At Dortmund, the team was set up to play to his strengths, affording him space to break into and plenty of time on the ball to pick out runners ahead of him. At United, however, Solskjaer is instead setting his team up around Ronaldo. 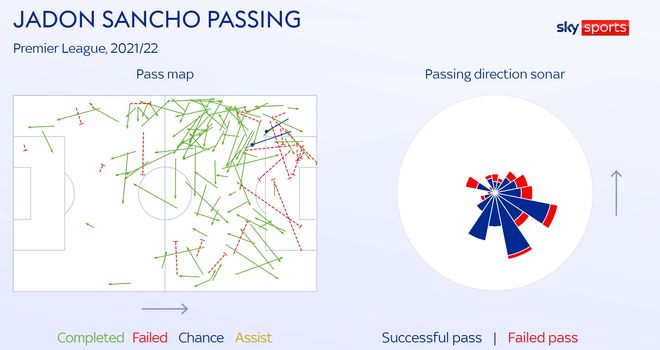 Sancho is therefore getting fewer opportunities to do what he does best. So far, he has only directed 15 per cent of his passes forward in the Premier League - a drop from 25 per cent in the Bundesliga last season. He has only sent 10 passes into the opposition box.

It is of course a small sample size - Sancho has plenty of time to come good at Old Trafford - but the circumstances help to explain his stuttering start. Ronaldo is the main man at United now but Solskjaer must find a way to play to Sancho's strengths too. Harry Maguire and Luke Shaw have struggled this season

Saturday's defeat was compounded by injuries to Luke Shaw and Harry Maguire. Shaw was replaced by Diogo Dalot in the first half after he was unable to shake off a knock, while Maguire was forced off with a leg injury in the second period.

Before that, Maguire had struggled, almost costing his side a goal when he misjudged a backpass for David de Gea, while Shaw had also been poor.

Their performances were in keeping with their difficult starts to the season.

Shaw continues to be a source of danger offensively, particularly with his set-pieces, but he has looked sluggish at the other end of the pitch, at times leaving the players around him exposed.

Villa right-back Matty Cash appeared to have the beating of him in the first half at Old Trafford on Saturday and it was not the first time this season Shaw has struggled to cope defensively. 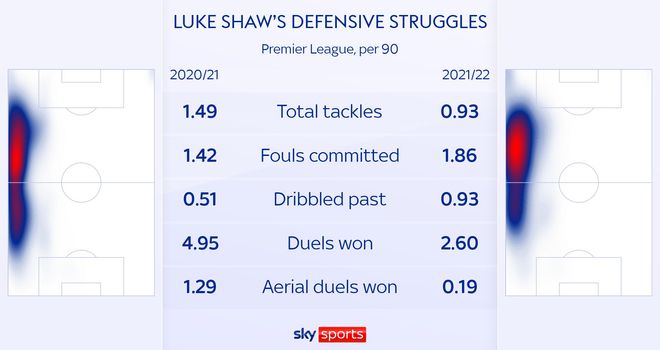 According to Opta, he is being dribbled past nearly twice as much as he was last season. He is making more fouls and fewer tackles. He is also winning fewer duels and fewer aerial challenges.

Maguire has been uncharacteristically sloppy at times too, despite the arrival of a world-class centre-back partner alongside him in Raphael Varane, and he and Shaw aren't the only members of England's Euro 2020 squad who have started the campaign slowly.

Indeed, that run to the final appears to have taken a toll, with Harry Kane, Raheem Sterling and Mason Mount among those also struggling in recent weeks. In the cases of Shaw and Maguire, it is just another problem for Solskjaer to contend with.

Aston Villa's goal at Old Trafford on Saturday, headed home by Kortney Hause from a Douglas Luiz corner, was another reminder of United's frailties from set-pieces. And as pointed out by Carragher on Monday Night Football, it was just one of many moments in which the hosts' dead-ball defending looked unconvincing.

Hause's goal was in fact the first United have conceded from a set-piece in the Premier League this season. But it is a long-standing issue under Solskjaer.

Since the start of the last campaign, and excluding penalties, only Crystal Palace and Leeds have conceded more set-piece goals.

United's total of 15 goals conceded from set-pieces in that time frame accounts for 30.6 per cent of their overall total - the highest percentage of any Premier League side.

The club have taken steps to address the issue, appointing Eric Ramsey, previously assistant coach of Chelsea's U23s, as their head of set-pieces during the summer. But those with specialist knowledge of set-piece coaching insist long-standing issues are difficult to fix overnight.

United's confused set-piece defending at Old Trafford on Saturday certainly suggests it will take time for their players to get to grips with Ramsey's methods. And if Maguire's injury requires him to spend time out of the side, this enduring weakness may become even more pronounced in the short-term.