Timo Werner finds goalscoring form for Chelsea and Germany but can he put difficult year behind him?

Timo Werner ended a six-month Premier League goal drought before the international break but can he now pick up where he left off? Watch Brentford vs Chelsea live on Sky Sports Premier League from 5pm on Saturday; kick-off 5.30pm His first goal was a powerful strike from a Thomas Muller flick. For his second, he controlled a Florian Wirtz cross, steadied himself, then curled a low finish inside the far post.

Timo Werner's double in Germany's 4-0 win over North Macedonia on Monday helped Hansi Flick's side become the first in Europe to clinch their place at the 2022 World Cup.

It also offered further encouragement that he might just be turning a corner. It's now five goals in his last five Germany appearances for Werner. He also found the net in the Premier League for the first time since April in Chelsea's recent 3-1 win over Southampton.

That goal, a close-range finish from Cesar Azpilicueta's low cross, prompted an explosion of celebration inside Stamford Bridge, the euphoria enhanced by the fact Werner had once again been denied by a VAR review earlier in the game.

His headed finish in the first half, ruled out due to a foul by Azpilicueta on Kyle Walker-Peters in the build-up, was the 16th goal Werner has had disallowed since his arrival at Chelsea from RB Leipzig last year.

"Every time he scores, we have the feeling there is a VAR decision to take it away from him," Chelsea manager Thomas Tuchel told Sky Sports afterwards. "There have been a lot of very narrow decisions."

Tuchel was delighted to see him finally celebrate without interruption - "we are all relieved," he added - and while the scoreline was ultimately comfortable, Werner's strike was a pivotal moment. "It was very, very important goal for us," said Tuchel.

The hope now is that it will help Werner put a difficult start to life in England behind him. Last season, despite featuring in all but three of Chelsea's 38 Premier League games, he only scored six goals.

There were six more in cup competitions but an overall tally of 12 in 52 appearances fell well short of expectations. 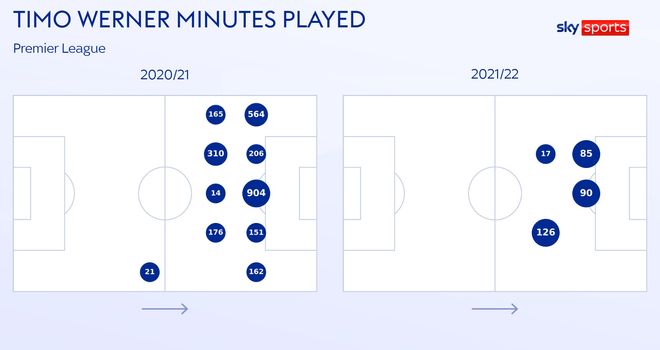 Werner has been used in various positions at Chelsea

After all, Werner had arrived in west London having netted nearly three times as many as that in the previous season with RB Leipzig. His tally of 34 in 45 games that year took his overall total for the club to 95 in 159.

Those numbers convinced Chelsea to pay £45m to secure his signature but neither Frank Lampard nor Tuchel were able to get the best out of him. Chelsea's profligacy in front of goal was a pre-existing issue but Werner soon became emblematic of it.

He has, in his defence, been unfortunate with some of the VAR decisions. He has struck the woodwork five times in the Premier League too. But only so much can be put down to bad luck.

His struggles are better explained by a crippling loss of confidence. A player renowned for his ruthless finishing in Germany lost his killer touch in his new surroundings and could not relocate it.

Indeed, after a run of seven goals in seven games between October and November last season, Werner didn't manage to score in consecutive appearances once. By the end of the campaign, only three Premier League players had missed more big chances.

The underlying data is damning. Since the start of last season, Werner's expected goal difference is by far the worst of anyone in the Premier League. While the best finishers typically outperform their expected goals, Werner went the opposite way.

The 25-year-old has never stopped trying, his tenacity helping to keep Chelsea supporters on side even during his leanest periods. But he has had to withstand heavy criticism too.

"I had to ignore it," Werner said earlier this week. "If I kept thinking about it, I wouldn't have been able to play. At some point, I knew the goals would start to come."

Romelu Lukaku's £97.5m arrival from Inter Milan could easily have knocked his confidence further. The Belgian has certainly limited Werner's playing time in the central striking position. But instead of complaining, he is trying to complement him.

Lukaku's ability to bring others into play and feed those running beyond him should work to Werner's advantage but there remains considerable work to do to strike up an understanding on the pitch.

So far, Werner and Lukaku have only exchanged passes on seven occasions in the Premier League at an average of only three times per 90 minutes. It is of course a small sample size but it suggests the chemistry is not quite there yet.

Werner will need more starting opportunities in order to create that chemistry but having been used everywhere across the front line since his arrival at Chelsea, the debate over his best role in the team becomes more complicated with Lukaku's introduction.

Perhaps the 3-1 win over Southampton before the international break shows the way forward. Werner was deployed as one of the two inside forwards behind Lukaku along with Callum Hudson-Odoi in that game and excelled in the role. Indeed, while he often found himself operating in deeper areas, there were still opportunities to run in behind the Southampton defence and he could still be seen taking up dangerous positions in the box.

In fact, his total of six shots that day - five of which came from inside the Southampton area - was his joint-highest in any Premier League game in the last two seasons.

It is food for thought for Tuchel as he tries to fit the pieces of his attacking puzzle together at Chelsea, and Werner will hope to pick up where he left off against Brentford on Saturday. For the first time in a long time, there is some momentum behind him.