Reece James has been outstanding under Thomas Tuchel this season; Chelsea wing-back scored his fifth goal of the season against Juventus; watch Chelsea vs Man Utd live on Sky Sports Premier League from 4pm on Sunday; kick-off 4.30pm 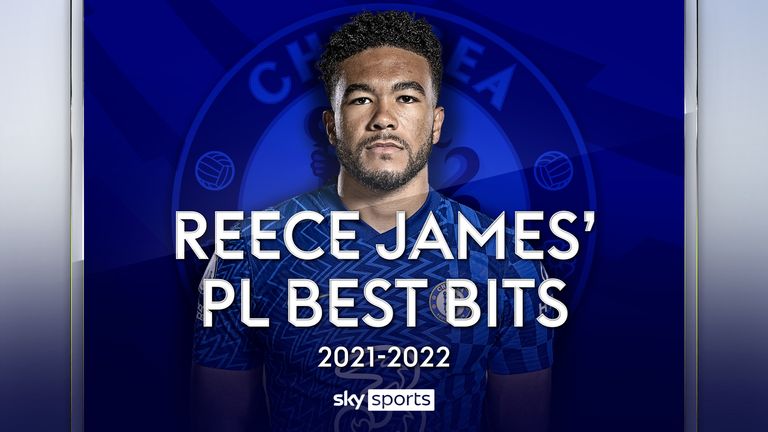 There were moments during Chelsea's 4-0 win over Juventus on Tuesday when Reece James appeared practically unplayable. Alex Sandro and Adrien Rabiot could be seen doubling up on him from as early as the second minute but their efforts were in vain.

The 21-year-old, all speed and explosive energy on Chelsea's right flank, ripped into Massimiliano Allegri's side from the start. By the end, as well as scoring his fifth goal of the season, he had taken more shots than any other player and created the most chances too.

Juventus are not the first side to have found it impossible to cope with him this season and they will not be the last. James is perhaps the most dangerous player in the country right now. His attacking output might even be redefining expectations of the wing-back.

In addition to the five times he has found the net himself, James has provided five assists, giving him a higher combined total than any other Chelsea player this season. Across all competitions, he is averaging a goal or assist every 100 minutes.

His latest effort, rifled home from Ben Chilwell's half-cleared cross on Tuesday night, encapsulated the dual threat of Thomas Tuchel's wing-backs. His involvement in Chelsea's subsequent strikes further underlined just how much he is bringing to the side.

In the build-up to Callum Hudson-Odoi's third, he could be seen controlling a diagonal pass from Antonio Rudiger with the instep of his right foot in the box before teeing up Hakim Ziyech with his left.

For Timo Werner's fourth, he showed impressive strength to outmuscle Juventus substitute Moise Kean near the halfway line before pinging a pinpoint cross-field ball out to Ziyech on the left.

That combination of physical prowess and technical guile has long marked James out as a future Chelsea star and while Frank Lampard deserves credit for promoting him to the senior side, it is the former midfielder's successor who is taking his game to the next level.

Tuchel initially used James sporadically following his appointment at Chelsea in January. At times, the German even preferred to deploy him at right-sided centre-back rather than at wing-back.

That was done, in part, in order to add speed to Chelsea's backline against opponents seeking to run in behind, such as Leicester's Jamie Vardy in the FA Cup final. But Tuchel also explained that Cesar Azpilicueta, his other option in the right wing-back position, "took more risks" in the final third.

That has changed this season.

Tuchel has implored James to contribute more offensively and he has responded emphatically. If the academy graduate has any lingering inhibitions going forward, you would not know it.

The most striking change in James' game is the frequency with which he is getting himself into scoring positions.

He is averaging more than twice as many touches in the opposition box than he was last season and it is part of a deliberate strategy. "We need the wing-backs to arrive in the box to increase the chance of scoring and creating goal chances," explained Tuchel recently.

His numbers for chances created and shots are trending in the same direction as a result and James is also demonstrating far greater composure at key moments.

His shooting accuracy rate has leapt from 50 per cent last season to 83 per cent in the new campaign - the highest of any player to have had at least 10 attempts on goal in the Premier League so far.

It remains a small sample size - James has played just under 1,000 minutes in all competitions - but it is also worth noting that his goals have all come from roughly the same position.

His excellent strike against Juventus was just the latest reminder of how he is timing his runs intelligently, ensuring he has space to get a shot off when the ball reaches him at the back post.

James is proving elusive in the opposition box and, like Chilwell on the opposite side, he is also making greater use of what is known as the 'half space', the area between the wing and the centre of the pitch, where he interchanges positions with the wide forward on that side, making him even more difficult to defend against.

"Reece is allowed to come inside, that's not a problem," said Tuchel recently. "We have all the players in the spaces where we want to be dangerous. So, if there is a winger waiting wide, the wing-back is allowed to attack the half space."

Against Juventus, the tactic caused repeated problems, and the hope for Chelsea is that - even if Chilwell is unavailable over on the left following his early withdrawal with a knee injury in that game - it will be a similar story against Manchester United on Sunday.

James will certainly fancy his chances of inflicting more damage at Stamford Bridge. Manchester United's left flank is, after all, an area of considerable weakness. Of their 11 errors leading to shots or goals this season, five have come on that side. They have conceded a high concentration of goals from there too.

Luke Shaw is enduring a particularly difficult campaign at left-back while United now face the prospect of being without captain and left-sided centre-back Harry Maguire, who is suspended for the trip to west London following his sending off in Ole Gunnar Solskjaer's final game in charge against Watford last Saturday.

If there is anyone capable of exploiting their frailties in that area, it is surely James. Juventus could not cope with him and nor could Leicester before them. Manchester United could be next.