Pierre-Emerick Aubameyang has signed a new three-year contract with Arsenal.

The 31-year-old's deal had been due to expire at the end of the season, but he has now ended speculation by extending his stay at the Emirates.

The Arsenal captain scored in their opening-day 3-0 win over Fulham on Saturday, with first-team manager Mikel Arteta hinting after the match a new contract was close.

Arteta added: "It was important for Pierre-Emerick to stay with us. He's a superb player with an incredible mentality. Being the player to have taken the least amount of time to reach 50 goals with this club tells you everything you need to know about him and his way of working.

"He's an important leader for the team and a big part of what we're building. He wants to be up there with the best players in the world and leave his mark. He can achieve that here."

Aubameyang scored 22 goals in the Premier League last season and netted twice in Arsenal's 2-1 win over Chelsea in the FA Cup final to secure their place in the Europa League. 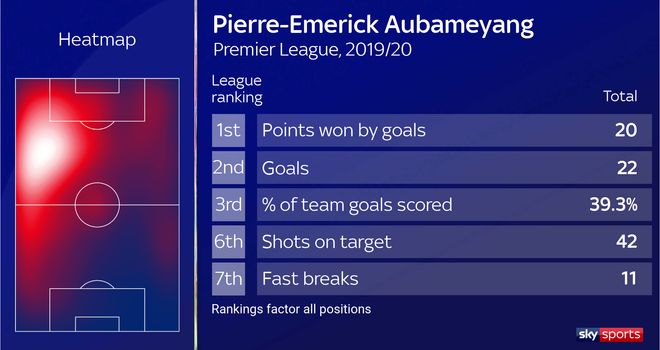 The Gabon forward also scored - and converted the winning spot-kick in a penalty shootout - as Arsenal beat Liverpool to win the Community Shield.

Since his move to Arsenal from Borussia Dortmund in January 2018, he has scored 55 goals in 86 Premier League games.

Technical director Edu said: "It's clear Auba loves the club and everything we stand for on and off the pitch. He's obviously a very important part of the team so we're all delighted he has committed his future to us. It's a big boost for everyone - fans, team-mates and staff."

Auba: 'I want to leave a legacy at Arsenal'

After announcing the extension via a live steam on the club's Instagram and Twitter accounts, Aubameyang stated his desire to follow in the footsteps of Thierry Henry, Ian Wright, Tony Adams and Dennis Bergkamp and become an Arsenal legend.

"Of course I knew about Arsenal before I arrived, everybody knows how special this club is," Aubameyang said.

"I've seen incredible players. Passionate players. Invincible players. I dream of being one of them, amongst the best, and staying in the hearts of the fans forever.

"I want to become an Arsenal legend, just like Thierry, Wrighty, Adams and Bergkamp. Too many to mention.

"My dad is my biggest inspiration and he was captain of his club and his country, so it means so much to me to be the captain of this special club. I want to leave a legacy, this is where I belong. This is my family."

I spoke to a couple people close to Arsenal earlier on Wednesday, this represents a huge deal, a huge coup for Arsenal because I've been told - they won't tell me the clubs - there were two major offers for Aubameyang during this transfer window, which didn't get leaked out.

Two big clubs. So then you have to go and give a bit of credit to technical director Edu and Mikel Arteta, because Arteta has always said it's not about whether Aubameyang wants to stay at Arsenal, we have to convince Aubameyang that we have the ambition to fulfil his ambition, that we're going to sign the right players for him to commit another three years, to make sure he's at a club that's winning things.

Analysis: This deal is a sign of where Arsenal are heading This is a great deal for Aubameyang, says SSN's Dharmesh Sheth

No need for 'Announce Aubameyang Contract'. It is done. He has signed. And for the player, it's a great deal. Three years in fact.

There were some dissenting voices. Why give a 31-year-old that length of contract and that much money (reportedly £250,000 a week)? Simple. 72 goals in 111 appearances. Since he made his debut, nobody in the Premier League has scored more than Pierre-Emerick Aubameyang.

This deal, though, is perhaps a sign of where Arsenal are heading.

"Hopefully we can convince him that this is the right place for him and that he has a future here". The words of first-team manager Mikel Arteta when asked about Aubameyang in February.

Turns out Arteta and Arsenal have convinced him.

"The new contract on its own will delight Arsenal supporters, but what it signifies could provide reasons to be optimistic about where the club is going."

An eighth-placed finish may say otherwise, but it appears Aubameyang is buying into something. Under Arteta, Arsenal have beaten Manchester United and Liverpool in the Premier League. They won the FA Cup thanks in no small part to victories over Manchester City in the semis and Chelsea in the final - Aubameyang scored twice in both matches.

In those games Arteta's tactics were lauded, tactics which brought the best out of his main man. Add to that, Arteta has shown a ruthless streak - ask Mesut Ozil and Matteo Guendouzi. Undoubtedly, the strength of the manager will have been a huge factor in Aubameyang's decision - as will the ambition of the club.

There is an acceptance Arsenal need to be creative in this transfer window, but make no mistake, Aubameyang will have asked about potential signings. Are they bringing in players to help challenge for a top-four place, and dare I say it, the title? Aubameyang must think so.

There are changes behind the scenes. Head of football Raul Sanllehi gone, managing director Vinai Venkatesham taking over the role with an accompanying rallying cry. "There is much work to do to return Arsenal to the top of the game where we belong, which is what our fans rightly demand." A view no doubt shared by Aubameyang.

Arsenal in advanced talks for Runarsson

Arsenal are in advanced talks with Dijon over the signing of goalkeeper Runar Alex Runarsson.

The 25-year-old Iceland international has two years remaining on his contract with the French club having joined from Danish side Nordsjaelland in 2018.

Arsenal are in the market for a back-up 'keeper to compete with youngster Matt Macey, having accepted a £16m bid from Aston Villa for Emiliano Martinez. 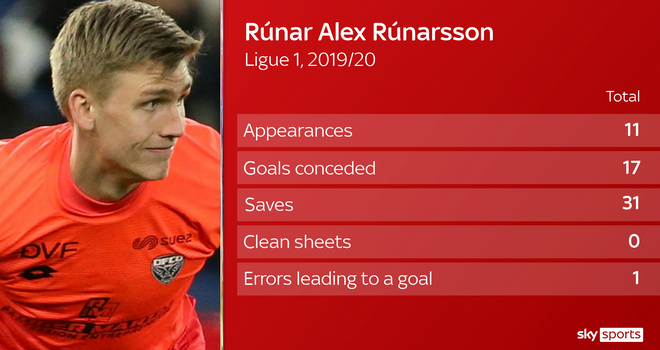 The 28-year-old Argentinian is expected to complete the move to Villa Park this week.

Martinez has two years remaining on his contract at the Emirates and impressed when stepping in for first-choice 'keeper Bernd Leno when the German was injured in June, but the Gunners are actively looking to generate funding for further outfield signings in this window.