Dele Alli: Can Tottenham attacker win back his place in Jose Mourinho's plans? Jose Mourinho has described his Tottenham squad as a puzzle - but where does Dele Alli fit in?

The 24-year-old was hooked off at half-time during the poor defeat to Everton on the opening weekend, and has been absent from the Spurs squad entirely for the subsequent wins over Lokomotiv Plovdiv and Southampton.

Following Sunday's 5-2 victory on the south coast - and amid reports a number of clubs, including Champions League finalists Paris Saint-Germain, are interested in signing Alli in this transfer window - Mourinho pointed out he wants a balanced squad and that Alli is just one of a number of attacking options he has.

Gareth Bale's headline-grabbing arrival on loan from Real Madrid has further strengthened Mourinho's resources in that department and while the manager says he is still looking for another striker, Bale is likely to form a first-choice front-three with Heung-Min Son and Harry Kane, the stars of that win at Southampton.

There is then Erik Lamela, Lucas Moura and Steven Bergwijn - all players Mourinho has praised in the past - vying for attacking roles, as well as Alli. Further back down the pitch, Giovanni Lo Celso and Gedson Fernandes - who will also act as cover at right-back - come into the reckoning, too.

When Mourinho was asked on Sunday whether Alli could be in that 'balanced squad' he is trying to create, he said he could and doesn't need to be sacrificed. But clearly, despite the rotation required to manage Tottenham's intense schedule - and it is particularly brutal right now - there will be players mentioned above who will have to make way for Mourinho's preferred choices. After Alli's recent omissions and within the context of the recent documentary about Spurs last season, in which the player was critical of the team's tactics and Mourinho described him as 'lazy' in training, it is clear he has work to do to move back up the pecking order.

It's all a far cry from just two and a half years ago when former boss Mauricio Pochettino was describing Alli as the best 21-year-old in the world. Those comments came after Alli had ended a 16-match goal drought with a strike against Bournemouth.

"For me, Dele Alli, in his age, is the best - that's it...We always want more but from the day he made his debut for Tottenham he has been one of the best in the world."

Mauricio Pochettino on Dele Alli in 2018

Pochettino had been perplexed by the criticism Alli had been receiving and put his performances in context of his age. At that point, no player under the age of 22 had recorded more goals and assists since Alli's Premier League debut across Europe's top five leagues.

Alli's brilliance in his first seasons at Spurs raised the bar and, even now, his output is held up and compared with those incredible early figures.

Signed from MK Dons as an 18-year-old, Alli scored 28 goals and recorded 16 assists across his first two seasons. Huge numbers for a teenager in the Premier League. The following season, he added nine more goals and 10 assists. With Pochettino's praise in his ears, he headed to the World Cup with England and scored in the quarter-finals for Gareth Southgate's side.

Mourinho, in charge at Manchester United at the time, has since revealed Sir Alex Ferguson encouraged him to bring Alli to Old Trafford, such was the excitement about his potential.

But the drop-off is inescapable. There were just 13 goals and seven assists in the next two Premier League seasons, and Alli is no longer in the England squad, let alone a fixture of the first XI as he was at the World Cup. The bounce in his form when Mourinho first came in - four goals and three assists in the first five games - didn't last and seems a long time ago now. 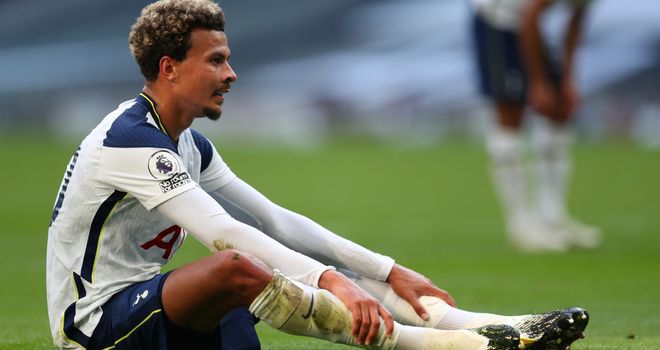 Will Alli be able to convince Mourinho he deserves a first-team spot?

Alli doesn't turn 25 until April. He's still young and has time on his side to get back on track. But the key question is how will he respond to this challenge? And, intriguingly, where?

Tottenham are adamant Alli isn't for sale and won't be going out on loan. If that proves to be the case - and there would be few clubs in this current climate able to afford the transfer fee to free him from his contract which runs to 2024 - then he must convince Mourinho he can contribute consistently and in the manner the manager wants his players to perform.

Leyton Orient away in the Carabao Cup on Tuesday night could be his first step back into the fold - if it goes ahead. It isn't the most glamorous tie but it could be crucial for Alli.

But with Bale's return raising expectations and ambitions in north London, Alli needs to recapture those levels of performance which had Pochettino purring just a couple of years ago.

He must prove he deserves his place in the puzzle.

Analysis: What do the stats say about Dele?

Dele Alli was the poster boy of England's new generation only a few years ago, but his form has been in decline for several seasons now - hindered by several injuries.

Looking at his averages, to factor diminished minutes over the past two campaigns, his goalscoring ratio last season was his highest since 2016/17 - boosted by a purple patch when Mourinho took charge.

If you scroll through the per-90 stats in the interactive graphic below, the only notable statistical dips are in chances created and assists. This coincides with Harry Kane's declining attempts at goal.

So it's a chicken or egg debate here.

Despite the goal-packed 5-2 win at Southampton on Sunday, Spurs' returns for goals and creating chances as a team have been dropping in three successive seasons now - with the latter mirroring Alli's downward trajectory.

Primarily deployed as the central attacking midfielder in a 4-2-3-1, Pochettino experimented playing Alli in deeper roles during 2018/19 - which would have contributed to creating fewer chances. 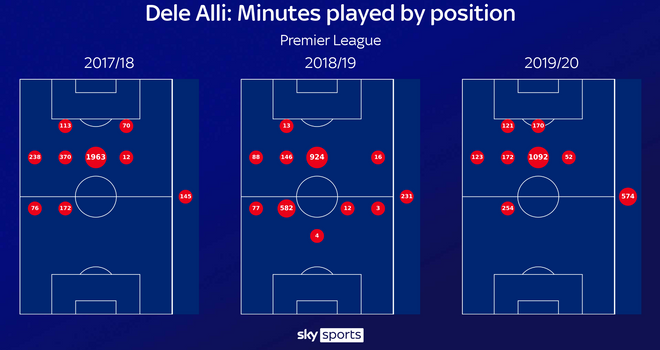 The heatmaps below reveal Alli continued to get involved more defensively last season - even though he played almost exclusively along the attacking line - suggesting he may have been required to track back more by Mourinho. Alli combined with left-back Ben Davies frequently during his productive 2017/18 campaign, but the Wales international has been used in a more conservative role in recent seasons.

Without the advanced full-back, Alli has increasingly looked to pass infield or back to his centre-back. Indeed, Alli may have benefited from playing alongside new attacking full-back recruit Sergio Reguilon. 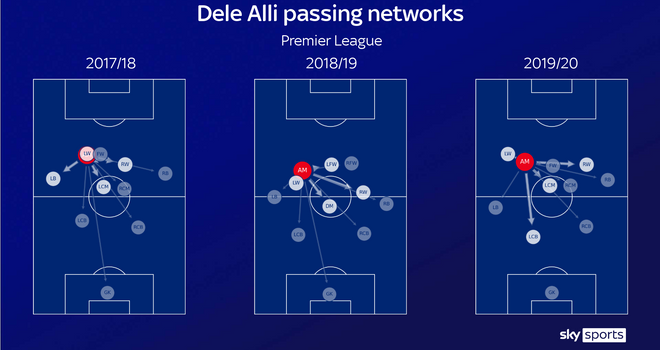 The passing direction sonars below underline how Alli used the left channel with greater effect three years ago, albeit with far less frequency than passing infield - but those runs also provided effective decoys to free up space elsewhere.

Last season, Alli attempted far more passes directly upfield with less accuracy and barely used the left channel at all - in addition to playing a higher proportion of backward passes. 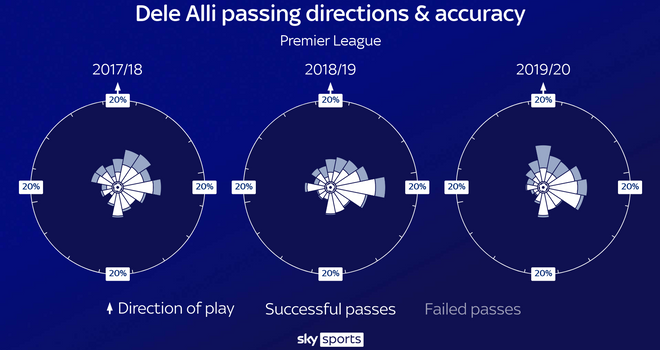 Mourinho appears to be pressing the reset button on Alli and plans to instil a determination to maintain consistent form levels, on par with his peak early years and his flourish late last year.

Alternatively a loan move could reinvigorate England's former golden boy and Tottenham could be a more balanced side upon his return - once Mourinho has finished rearranging the jigsaw pieces.