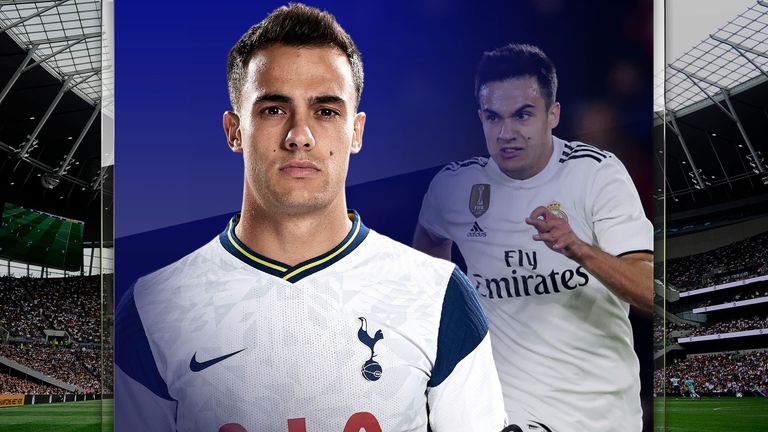 Sergio Reguilon, who was also linked with Manchester United, joined Tottenham from Real Madrid for a fee which could rise to £32m

Sergio Reguilon is casting his mind back to Jose Mourinho's time in charge of Real Madrid. "I was very young, still a cadete in the academy, and I never had the good fortune of meeting him," he tells Sky Sports. "But I have great memories of that period.

"In my house, we were all big fans of Mourinho."

Little did he know that the man guiding Real Madrid back to the summit of La Liga would one day feel the same way about him.

Reguilon's move from his boyhood club to Tottenham last month was somewhat overshadowed by that of a certain team-mate. But it was no less significant to Mourinho. In fact, Reguilon was regarded as a key piece of the 57-year-old's Spurs puzzle.

"He is a world-class manager and he was very important in my decision to come," says the left-back, speaking from Tottenham's Enfield headquarters ahead of the morning's training session.

Reguilon's stock was high following a superb season on loan with Sevilla in which he helped the club win the Europa League, but when Tottenham's interest surfaced and it became clear Real Madrid were willing to let him go, he didn't have to deliberate for long.

"There was a broad market but as soon as I heard of Tottenham's interest, it was simple," he says. "It was a big deal to leave my country, my league and my family, but it has worked out well.

"Since I arrived here, the truth is the club has surprised me in a very good way. The training facilities, my team-mates, everything. The stadium is insane. I have really enjoyed it so far."

Reguilon was offered encouragement by Gareth Bale as well as Mourinho before joining. The Welshman, whose sensational return to Spurs became the story of the summer transfer window, only had good things to say about his former club. The pair ended up sealing their moves on the same day. 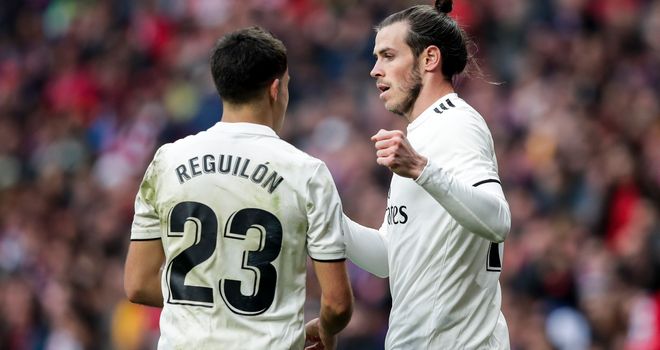 Reguilon and Gareth Bale played together during the 2018/19 season

"I spoke with Bale when I was in Madrid," says Reguilon. "He told me what it was like at Tottenham. It was helpful for me to come here with someone who was already a team-mate. I could ask him things, like how certain things were going to work.

"Bit by bit, I am getting to know them more as people, not just as players I know from the PlayStation or the television. Now, they are all in contact with me and I know them better. That really helps."

Reguilon is still getting to grips with English - this interview, his first since his arrival at the club, is being conducted in Spanish - but his understanding of the language is improving - "as long as people speak to me slowly," he says with a chuckle - and he has adapted swiftly on the pitch.

He has certainly needed to.

Since making his debut in the penalty-shootout victory over Chelsea in the Carabao Cup last month, he has made his first two Premier League appearances in the 6-1 demolition of Manchester United and the crazy 3-3 draw with West Ham. In between those outings, there were even two games for the Spanish national side. 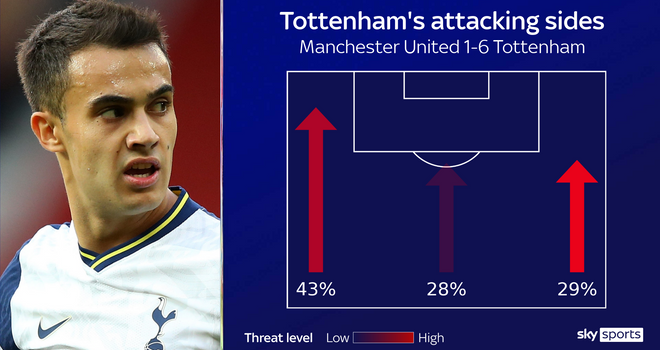 Tottenham directed a high proportion of attacks down Reguilon's flank against Manchester United, with the full-back creating four chances

After the high of the victory at Old Trafford, the draw with West Ham, when Spurs surrendered a three-goal lead in the final eight minutes at the Tottenham Hotspur Stadium, was tough to take.

"It felt like a defeat," says Reguilon. "It was a big failure on our part, a big error. I was very angry afterwards. I didn't want anything to do with anyone. But in the end, it's football, and in football, anything can happen. Hopefully we can put it behind us quickly."

It has been a breathless introduction to English football for Reguilon - he calls it "a lot more dynamic and more explosive" than what he is used to in La Liga - but the 23-year-old has emerged from it with his reputation enhanced, his offensive threat from left-back underlined by his assists against Chelsea and West Ham.

"I think I am improving with every game as I get more and more used to the competition," he says. "I want to keep growing, on a personal level as well as in footballing terms. The manager is giving me a lot of advice and I am gaining a lot of experience, but for me, honestly, the most important thing is that the team does well.

"If the team is doing well, it's easier to perform."

Reguilon's attacking ability was a big part of the attraction to Mourinho but his attitude was another factor and so too was his character. In All or Nothing: Tottenham Hotspur, Mourinho is seen repeatedly ordering his squad to shed their nice-guy reputation. In Reguilon, he knew he was acquiring a player who possesses the combative edge he craves. 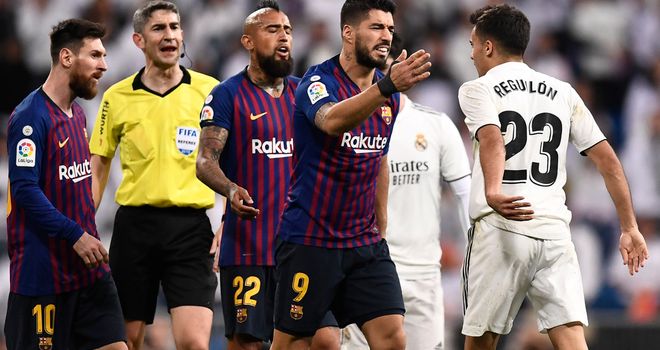 Reguilon clashed with Luis Suarez during a 2019 Clasico

Indeed, although a diminutive figure at 5ft 8ins, Reguilon has never been one to shy away from conflict. He was once involved in a training-ground dispute with Sergio Ramos during an open session at Real Madrid. In March 2019, he was even seen confronting Luis Suarez and Lionel Messi during a fiercely-contested Clasico against Barcelona at the Bernabeu.

Mourinho, who was watching on as a television pundit that day, evidently liked what he saw. "I think that is just my identity," says Reguilon. "I am a very competitive player who is always battling and fighting on the pitch."

Reguilon has certainly thrown himself into his new surroundings. On his debut against Chelsea, he had the strength of character to recover from the error which led to Timo Werner's opening goal and produce what Mourinho described as an "incredible" performance.

"It showed me the personality of the player," added the Spurs boss.

Mourinho loved Reguilon's display of resilience and there has been plenty more tenacity since, most notably in the 6-1 win at Old Trafford, when he covered more ground and made more high-intensity sprints than any of his team-mates. 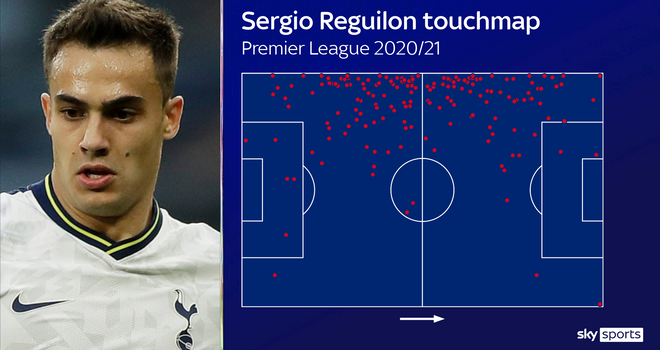 Reguilon has made an impact at both ends of the pitch

Those battling qualities were instilled in Reguilon during his time in Real Madrid's La Fabrica youth academy, where the standards are sky-high and the competition is ferocious at every level. Only a handful of young hopefuls make it as far as the first team, as Reguilon did when he broke through under Santiago Solari in 2018.

"It's very difficult to go from the academy to the first team at Real Madrid," he says. "You have the best players in the world there and the level needed to get into the squad is very high. You have to believe in yourself, to know how to fight, and to get that little bit of luck that every player needs in his career."

Reguilon's luck was that Solari had previously coached him with Real Madrid Castilla, the club's B team, and while he eventually lost his place in the side under Zinedine Zidane, Solari's successor, the youngster remains indebted to his boyhood club for the role they played in his development.

"Leaving was a difficult step to take but it's one you have to take at one point or another and, for me, I think it was the right time. It's tough to leave your family and everything, but this league, for me, is the best in the world and I am very happy here. Now I just want to focus on trying to help this club win trophies." 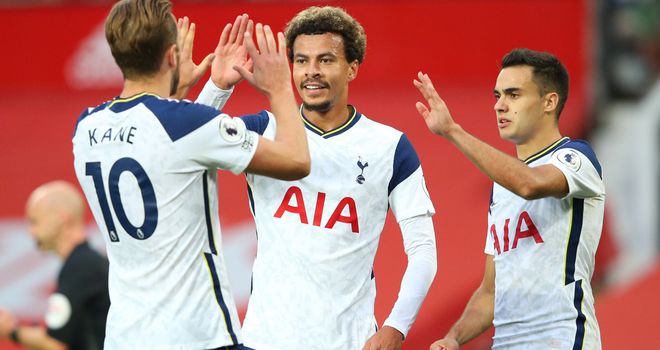 Reguilon made his Premier League debut against Manchester United

Reguilon is not the only one who feels the conditions are right to blossom at Spurs having made the move from Spain.

Bale is still waiting for his first start as he continues to work his way back to full fitness, but, like Reguilon, he is enjoying life in north London. "He is very happy here and seems more like the person he really is," says Reguilon.

The late collapse against West Ham was a reminder that Mourinho's Spurs remain a work-in-progress, but the prospect of Bale joining Heung-Min Son and Harry Kane in their front three is a tantalising one, especially if he can slot in as seamlessly as his younger team-mate has at left-back.

"I believe we have a squad capable of fighting for every competition," says Reguilon. "It's true that we have a busy schedule this season and there are a lot of competitions, but we have the squad to be there. I try to take one game at a time, but we'll begin to see where we can end up as the season progresses."

With Reguilon charging up and down the left flank, their prospects already look brighter.