The Norway midfielder on life in the top flight, getting to grips with overlapping centre-backs and studying Kevin De Bruyne; Watch Sheff Utd vs Wolves live on Sky Sports on Wednesday; Kick-off 6pm 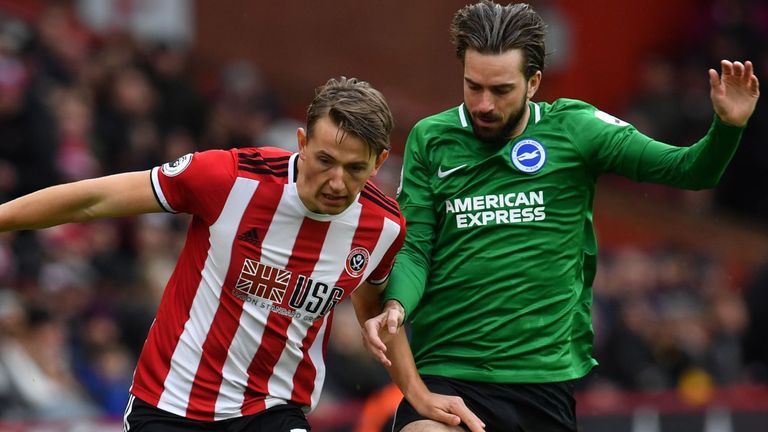 The light was fading behind Selhurst Park's Main Stand as Sander Berge, a little sheepishly at first, made his way towards the Sheffield United fans celebrating a 1-0 victory.

A Norwegian flag rippled over palms, an ode to the tune of She's Electric was on repeat and suddenly, the club's record signing thrust into the Premier League spotlight stood alone with outstretched arms, drinking it all in.

It had been his "dream to play in the best league in the world" but after the unexpected adulation came the reality: a relentless schedule, the challenge of Chris Wilder's tactical system midway through a season and life, for now at least, in a hotel room. Then, the pandemic. 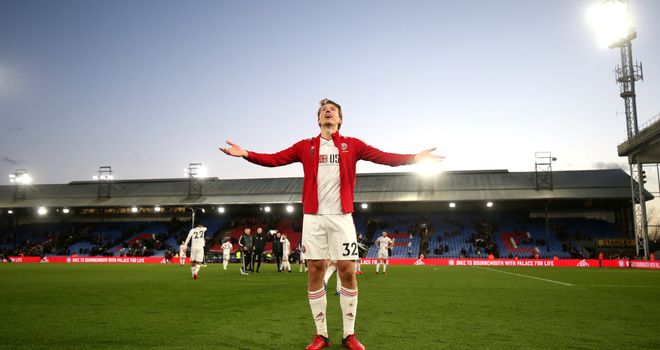 It should have been disorientating for a 22-year-old laying new roots after three years in Belgium. Instead, he cherished a chance to reset.

"People will probably think, 'Oh, that must have been so tough,' but for me it was the opposite," Berge, who signed on the penultimate day of the January transfer window for a £22m fee, tells Sky Sports in an exclusive interview.

"I was just getting started but I jumped straight in so I was playing on my enthusiasm more than my qualities really. I don't want to say 'lucky' because it's been such a difficult time for everyone but I probably needed the break to settle at training and outside of football, too, because that's so important to how you can perform.

"I got time to think, mentally reflect - I'm a guy who can enjoy my own company - and stay ready because I always hoped we would start up again. I felt I could use the break to my advantage, to treat it like a pre-season."

He is grounded enough to not let the transfer fee weigh heavy but he did extra weights and Wattbike sessions, spent time poring over videos to try and get a grip on the sort of telepathy that has allowed the overlapping, overloading Blades to bewitch experienced Premier League defences, and found escape in the nearby Peak District countryside that "gave him a feeling of home".

Berge arrived with a big price tag - the sort of money Sheffield United still recently could only have dreamed of spending - and a big reputation as one of the brightest young midfielders in Europe.

Now he is settling in south Yorkshire, that hotel finally a place of his own, and it is showing. 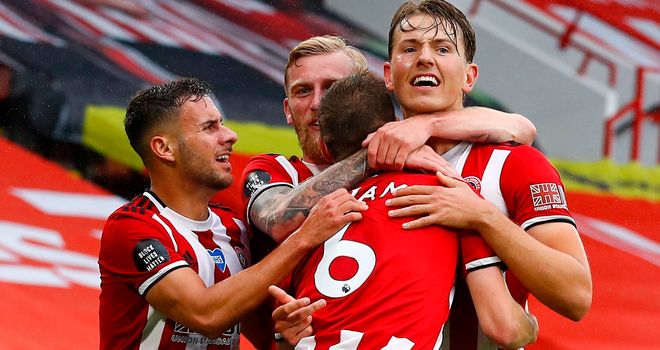 Before lockdown, the Norway international who had excelled for Genk as a deeper-lying central midfielder, had been tidy, steady in a more unfamiliar role on the right of a midfield three, but he has been feeling "sharper" - he says it with conviction - since play resumed, even if his team-mates have taken time to find their collective flow.

In a narrow FA Cup defeat to Arsenal, he was a standout performer, pressing, snuffing out passing lanes, driving into opposition territory. Then, against Tottenham - one of the Blades' most complete performances of the season - he scored his first Premier League goal. His first touch crafted a yard; his second was a crisp one with the laces that gave way to "many emotions in one moment".

"It would have been so enjoyable with the fans there singing my song but when I scored it was the greatest feeling I've ever had, probably, because you've worked so hard for something," he says.

"It's been so special since I've signed in terms of how much my team-mates and the club have welcomed me. When I got that goal it felt unbelievable. "When I scored it was the greatest feeling I've ever had, probably, because you've worked so hard for something."

"I feel I've raised my performances quite a lot since the restart. I felt good coming back because I knew I'd put in a lot of effort. Physically, I'm strong but it's something else in the Premier League in terms of the speed and intensity. I had a good base at Genk but it's way tougher here.

"I barely managed to play 60 minutes in January and now I've played 60, 90, 90 in seven days. I've taken a huge step there and when you manage to handle the physical part of the game, you feel more confident; you can start showing your qualities."

His maturity and character has always impressed Wilder but his pedigree, his potential is becoming clearer. There is a graceful physicality to his play; an uncanny, slow-motion ability to shrug off opponents yet the agility to turn out of trouble or play a disguised pass. An assist accompanied his own strike against Spurs, borne out of balance at the byline that belied his 6ft 5" frame. Sander Berge in action for Genk

And yet Berge had started at his first club, Asker, as a striker because he was small. "I know you're thinking, how is that possible?!" he laughs. He had tried, like his brother - and mother, a Sweden international - to play basketball too, but he was enchanted by Ronaldinho and then Lionel Messi at Barcelona and gave in to the game with the ball at his feet.

By the time he was playing in Norway's top flight for Valerenga - now on Wilder's radar - he was functioning as one of two holding midfielders, effortlessly breaking up opposition attacks. Later at Genk, whom he helped to the league title, as well as Champions League qualification, he would usually snuff out danger alone, allowing midfield team-mates to get forward.

There was a performance to catch Jurgen Klopp's eye during that European adventure. Everton were also interested. But Wilder, having failed to lure the player after promotion last summer, was given licence to pounce midway through the season with the club now riding high. On Berge's first day, Wilder - who sought the counsel of another Norwegian, former Blades favourite Jan Aage Fjortoft before making his move - drove his new recruit across the city, pointing out matchday haunts, getting a feel for its fabric. 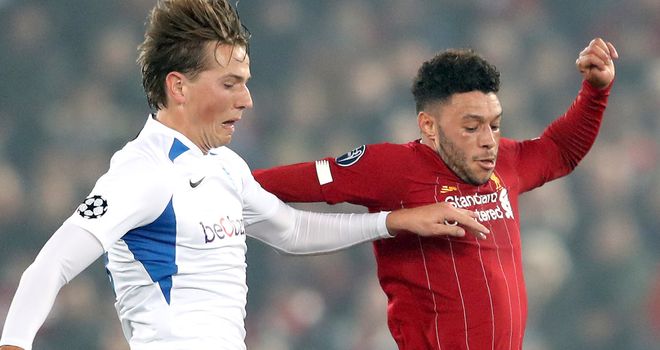 Sander Berge played against Liverpool for Genk in the Champions League

"It's been a special relationship since day one. The manager told me how much he wanted me, how much the club wanted me, what I could bring to the team and the goals and ambitions. They know my qualities here but they have been very thoughtful, very patient with me."

It has taken time to adapt tactically as well as physically to Wilder's idiosyncratic system; knowing where Chris Basham or George Baldock will be; gaining a deeper understanding of the individual in the whole.

"I'd say Sheffield United is by far the best dressing room I've been in and I think you can see that on the pitch," he says. "I've had to watch a lot of videos because I know this team has played together for some time. It's a really tight, well-structured - a proper unit performing together - and there are so many leaders out there.

"I'm still in that adapting phase a little bit but I'm gradually getting where I want to be. The more I'm training, playing, understanding how we want to do things, the more comfortable I'm getting.

"I've never been so much on the (right) side, playing this sort of combination football. You really need to know your team-mates. I'm seeing more of the game through their eyes, reading the game in the same way, and they're starting to know what I bring to the table." Sander Berge, who made his debut against Crystal Palace days after signing, is growing in influence

"I'd say Sheffield United is by far the best dressing room I've been in and I think you can see that on the pitch. It's a proper unit - and there are so many leaders out there."

He is having an increasing impact on the right, where John Lundstram is currently sidelined through injury, and though Wilder has admitted his plans are for a "long-term signing" to eventually occupy the central role currently being fulfilled by Oliver Norwood, Berge is learning either way.

"I've been known for playing centrally, stopping teams on the counter, dictating the game and breaking the lines with passes. I think in the Premier League and the way we play, that's my biggest strength, that I can drive with the ball, take on opponents and take the pressure off. That's more efficient in the No. 8 role in our team than the No. 6. but I feel like I can handle most positions.

"I'll play where the gaffer wants me to play; you run your socks off every time you wear that Sheffield United shirt. I like to think of it less in terms of where I play and more about how I can bring my qualities to the role and make it feel like home."

He is trying to pick from the playbooks of some of the best along the way; Yaya Toure - "I loved watching him in his prime at Manchester City, driving forward, scoring goals." - Toni Kroos, Xavi, Andres Iniesta and Kevin De Bruyne: "Now I'm watching him a lot, the positions he takes up, the passes he picks; he's unbelievable, the very best midfielder in the world at the moment."

But Norwood's advice has been invaluable. 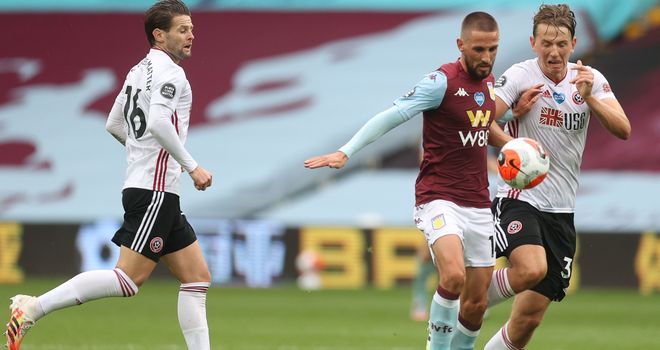 "Ollie has been really important for me ever since I came here, on and off the pitch. He's got so much experience. He coaches me a lot through games. I told him after the Tottenham game how much I appreciated it.

"He pushes me because he knows my strengths; he doesn't let me have a rest! He keeps me going, he's giving feedback all the time."

Berge's Premier League education continues apace. Wolves, Chelsea, Leicester and Everton all loom for a side who have already emphatically overachieved yet remain in the frame for European qualification.

However this campaign ends, he is convinced he and Sheffield United can grow together.

"I want to give everything back to this club because of how much love and respect they've shown me.

"Of course we want to establish ourselves as a good side in the Premier League but I think everything is possible. We're fighting for Europe at the moment but I think the potential is very high; with the experience we're getting this year, we will only get better.

"When you're a team on the right path and everyone has the same ideas, working hard together, you can go as far as you want."

Berge, finally finding his feet, is on that right path, too.