Wolves were already enjoying a successful season under Nuno Espirito Santo but their Champions League push has gathered momentum since the restart. Here, Adam Bate explains why the team’s style of play leaves them uniquely placed to take advantage…

With nine points out of nine since the restart, Wolves have been the big winners in the Premier League so far. Nuno Espirito Santo's side now find themselves in with a realistic chance of bringing Champions League football to Molineux next season.

What is fascinating is that their success behind closed doors was entirely predictable.

It is true that Wolves would have been favourites to win each of their three matches so far in any circumstances. They opened up with a 2-0 win at West Ham before second-half goals against Bournemouth and Aston Villa secured 1-0 victories over two more struggling sides.

But there is a sense that events have conspired to tilt the balance further in Wolves' favour because of their unique style of play. While others are left worrying whether their players can cope with a pressing game after such a lengthy layoff, the sterile environment and slower pace has only added to Wolves' ability to control games with and without the ball. 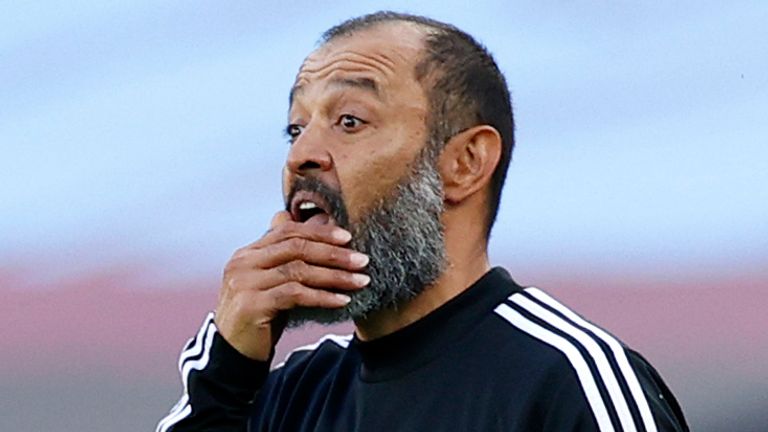 There is a theory too that Nuno's team will have benefited from the break.

Wolves have played more games than any other Premier League side in a season that began for them with the qualifying rounds of the Europa League in July. This is a small squad too. Only 16 of the current group have started a Premier League game this season.

But Nuno's approach means that there are good reasons why Wolves do not expend as much energy anyway. They have been outrun in all three games since the restart by a combined distance of 14 kilometres. Their opponents have sprinted more too.

Not that it has done them any good.

For all their running, Wolves' opponents have barely mustered a chance against them let alone a goal. Bournemouth's expected-goals total of 0.11 was the lowest of any team at Molineux this season. West Ham (0.53) and Villa (0.64) fared little better - also registering the lowest totals against Wolves in any of their away games so far this season.

Rui Patricio has had to save only one shot from inside his penalty box in six hours of football.

It is a testament to Wolves' organisation. The back three of Willy Boly, Conor Coady and Romain Saiss has been unchanged since Boly's return from injury in February, keeping seven clean sheets in the eight Premier League games that they have played in that time.

Ahead of them, the midfielders and wing-backs have found a way to restrict; a way to funnel their opponents' possession away from areas where they can cause problems.

Wolves have the fourth best defensive record in the Premier League in terms of expected-goals conceded based on the quality of chances that they give up. But unlike the rest of the top six on that list, they actually see less of the ball than their opponents. Nuno's side somehow manage to let teams have the ball without them being able to create anything.

Arrigo Sacchi, the legendary AC Milan coach, was fond of a training drill where his goalkeeper and the famous back four of Mauro Tassotti, Franco Baresi, Alessandro Costacurta and Paolo Maldini would face off against 10 attackers.

The attacking team could never score.

Speaking to Nuno in his office at the club's Compton training ground last season, he proposed a similar scenario to emphasise his belief in the power of the collective.

"You go and play with your friends and bring Pele, Maradona, Ronaldo and Messi," he told Sky Sports. "I will bring me, Max [Fitzgerald, the head of media] and Alison [Matthews, the first-team administrator] and we will win the game. Everything begins here."

In other words, organisation is everything.

"Everybody in the squad knows the tasks that they have to work on in training and in competition," he added. "They go home knowing what they are going to find tomorrow. Every player goes into the game knowing the process and what we want to achieve.

They hardly ever turn the ball over within 40 metres of the opposition goal and allow more passes before making a defensive action than almost any other team. They take longer than any other top-half team to win the ball back. Instead, Wolves just drop back into their defensive shape.

It is this approach that has left them well placed to cope with the new normal.

Other teams have been compromised by the summer heat, the fitness of their players, and the demanding schedule - all of which makes a pressing game more challenging.

The advantage for Wolves is twofold. Out of possession, they can continue to play their own game without too much difficulty. In possession, everything has become that little bit easier because teams who rely on closing them down are not doing so quite as quickly as before.

All three wins since the restart have seen Wolves dominate possession. That is rare. They won only three matches while dominating possession in the 28 games prior to lockdown and two of those were against opponents who'd had a man sent off in the first half.

Wolves' patience has been a feature of their three victories so far. Opponents in the relegation mix proved a challenge last season as they beat none of the bottom seven sides away from home and even last placed Huddersfield did the double over them. It all looks a lot easier now.

For Wolves, the complications have come when they have not been able to exercise their usual control - and that has often been when the tempo of the game has been at its highest.

It is telling that Wolves have conceded the most goals of any team in the first 15 minutes of games when they have struggled to quieten the crowds and cope with the pressing.

Once games have settled down, Wolves have been able to turn it around. They have the best goal difference of any Premier League team after the hour mark and have lost only one second half all season - a 2-1 win at Bournemouth when they were two up at the break.

It has become their calling card. Keep it tight and then, just as the opposition's energy levels drop, send for Adama Traore or Pedro Neto to take the game away from them. Three times since the restart they have gone in goalless at half-time. Three times they have gone on to win.

The next test comes against Arsenal at Molineux on Saturday and the contrast is stark.

How Mikel Arteta must crave the clarity at Wolves. The Gunners are a team in search of a grand idea. Off the field, there is talk of chaos and uncertainty. On it, Arteta made nine changes in the first three games after the restart compared to Nuno's two.

He will know what to expect at the weekend, of course.

But does that matter?

Every movement is now automatic. Every pass has been almost pre-programmed, as captain Coady explained earlier this season. "It is about knowing where your runners are going to be," he told Sky Sports. "Everybody knows their role and how to play it."

That level of control, that certainty to Wolves' play, could be the difference in the closing weeks of this most strange of seasons. Every team has had their preparations disrupted. But for so many reasons, no team looks quite so well placed to cope with that as Wolves.