Adama Traore: Tony Pulis' best friend to being taught to slow down by Darren Campbell

Sky Sports News speaks to a Spanish football expert who saw Traore break though at Barcelona, the manager who transformed his game, an Olympic sprinter who taught him how to run, and the club director who gambled on his promise 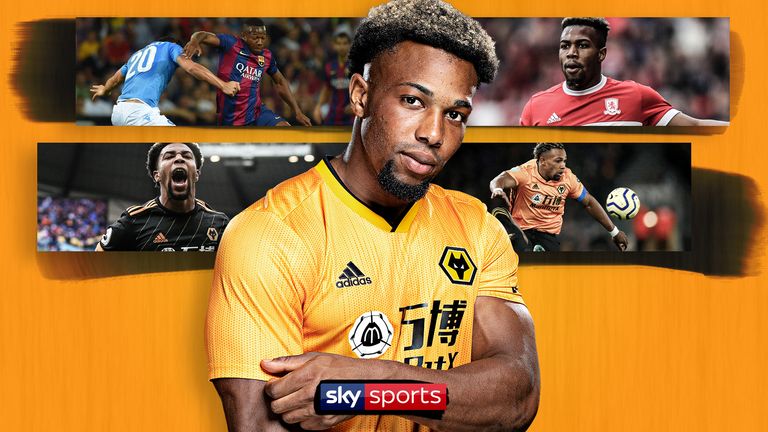 Adama Traore is blazing a trail in the Premier League and has quickly become one of Europe's most exciting and sought-after players. Sky Sports News spoke to those closest to his journey to get unique insight into his astronomical rise.

The 24-year-old's performances for Wolves have already seen him estimated to be valued in excess of £100m.

The shy boy who was let go by Barcelona has been transformed into a near-unstoppable attacker in Wolverhampton and those who know him best believe he is only going to get better.

Traore grew up in the shadow of Barcelona's famed La Masia academy and worked his way through their doors and into the first team, aged 17, in 2013.

Diminutive compared to his current frame, Traore's unpredictability and athleticism created a buzz around the club, enough for the teenager to find precious first-team minutes alongside Lionel Messi, Luis Suarez and Neymar.

Adama Traore played seven minutes for Barcelona in La Liga, during which he attempted four dribbles. 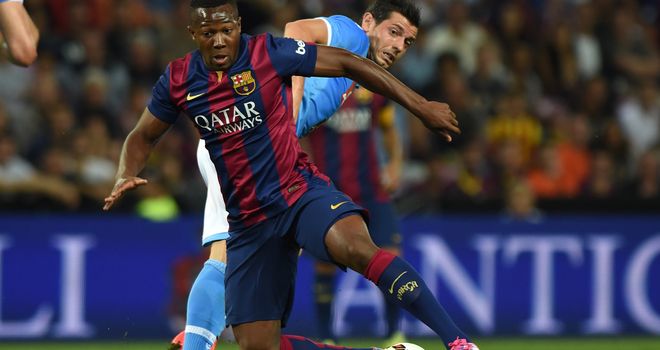 Traore broke into the Barcelona first-team at 17 behind the frontline of Lionel Messi, Luis Suarez and Neymar

"Take into account that he burst into Barca's first team in 2013 when he was 17 just two years before what would be a historic treble, yes that was massive expectation.

"He'd set an expectation with terrific performances in the youth teams and NextGen series. At that stage he was not only small, he was a diminutive figure and what he brought to the football pitch was a joyous kind of anarchy.

"Defenders didn't know where he was going to go and there was a suspicion Adama didn't either, but boy there was an excited chitter-chatter everywhere about this kid coming through.

"One of the things you have to feel sorry for is that he made his debut under Gerardo Martino who lasted one season at Barca and wasn't popular with the players. The next time he plays it's Luis Enrique.

"Did [Barcelona] want rid of him? No way. Now as his potential is being harnessed by Nuno [...] Barcelona are deeply jealous."

"It's really important to understand he left Camp Nou, not because Barca decided to sell him, but because there was a complete breakdown in communication between the agent, the club and the kid.

"He was liked everywhere, but the breakdown in communication was so fundamental with the agent. The club, his family and the agent all thought different things has been agreed.

"Barcelona should have been cleverer, it was only when the situation was in breakdown, did they finally agree to sell, but did they want rid of him? No way.

"Now as his potential is being harnessed by [Nuno Espirito Santo], he's looking like he could take on the world, eat the world as they say here in Catalonia. Barcelona are deeply jealous."

Pulis: I made him my best friend and built Boro around him

By August 2015, with only four first-team appearances to his name, Traore swapped Barcelona for Birmingham, but Aston Villa burned through four managers on their way to relegation and Traore only played in 10 Premier League matches that season.

His subsequent move to Middlesbrough also ended in relegation - but a drop down to the Sky Bet Championship and an invaluable working relationship with Tony Pulis was his kickstart to superstardom.

"Picking him up from the start, he lacked a lot of confidence, and a bit of self esteem. I just made him my best friend, as I have done with other people in the past, who I think have talent that they haven't really produced," Pulis revealed. 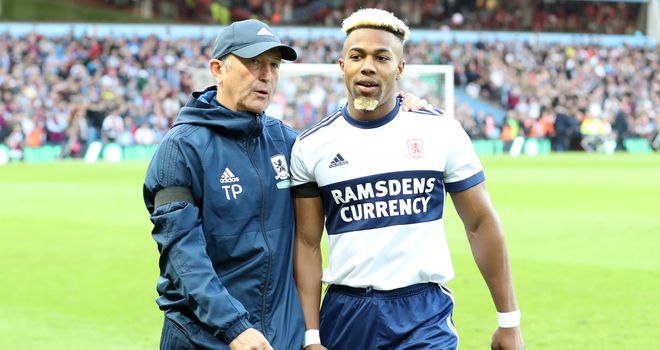 "The lads knew he would get special treatment. A few people were frustrated there with him. People could see there was enormous amounts of untapped talent there. It was just getting it out of him, turning that tap on, so that talent wouldn't be wasted. I spent a bit of time with him, we gave him quite a bit of leeway.

"I used to say to Adama, just take them on. You either get to the by-line and get crosses in, or if you are cut off, come inside and get a shot away. He's got a good left foot - he's not as confident as he should be with it, he could come in side and score goals.

"We simplified it, gave him licence to be a bit looser in the team, and everyone bought into it, because he started to produce the goods. He was creating chances, and scoring goals, and his confidence, that wasn't there when I first went in, just flourished. 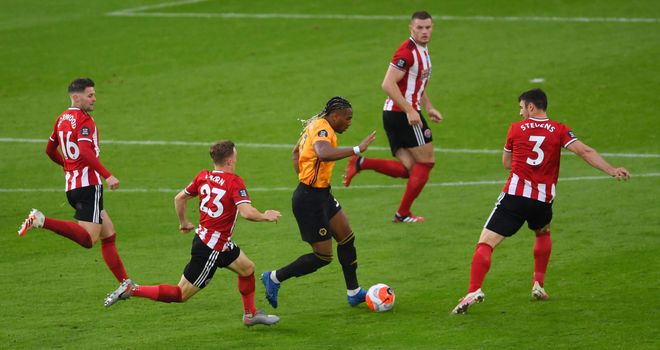 Traore completed 183 take-ons in the 2019/20 Premier League season, more than any other player

"It was lovely to see him grow as a person and an individual. He's a fantastic lad, he used to make me a nice cup of tea.

"There's no one more pleased than me to see him doing well, because of the personality he is, he is a lovely kid." 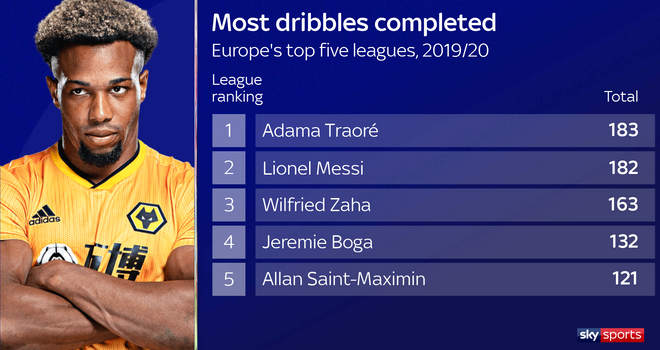 How an Olympic sprint champion slowed him down

"I went into the canteen [...] saw Adama Traore and went up to him and said 'you don't realise how good you can be, and I'm here to fix you'," Campbell recalls.

"Adama's 80 per cent was still faster than everyone else in the league."

"I guess being a failed footballer myself - I was fast, but no one showed me to slow down and use it. He reminded me of myself, he didn't know how to control his speed.

"He already had the condition. It was about teaching him to control his speed. In your car, you have six gears - Adama always used sixth gear. So for me, the key straight away was slowing him down.

"So instead of 100 per cent, the key was to get him to 80 per cent. His 80 per cent was still faster than everyone else in the league. 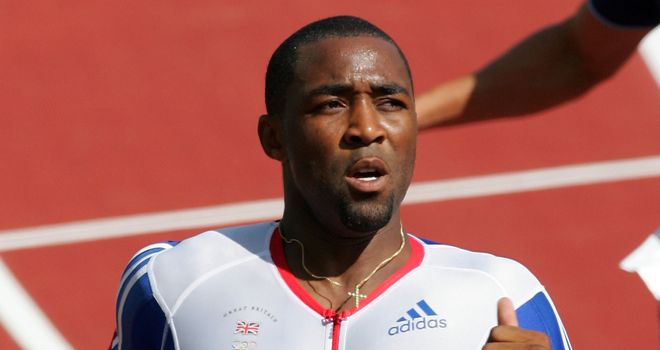 Campbell says learning how to breathe while sprinting has improved Traore

"At 100 per cent you hold your breath, and tension comes. So you've lost that ability to sigh, just before you cross the ball, or make a cross. For me, the change was ridiculous. To see him go from the bench, to a super sub, to starting games - and then by the end he was taking corners. I thought, for me - job done!

"He could definitely be a successful sprinter at 60m - maybe 100m. So much of his running is natural, he has fast-twitch fibres. The fact that he's the fastest footballer out there tells you his speed is exceptional."

Traore's improvements at the Riverside caught the attention of Wolves, who parted with a then club-record £18m for his services.

It would have been seen as a gamble at the time, but looking back, Wolves' former sporting director Kevin Thelwell knew that if the move did pay off, it would pay off in a huge way. 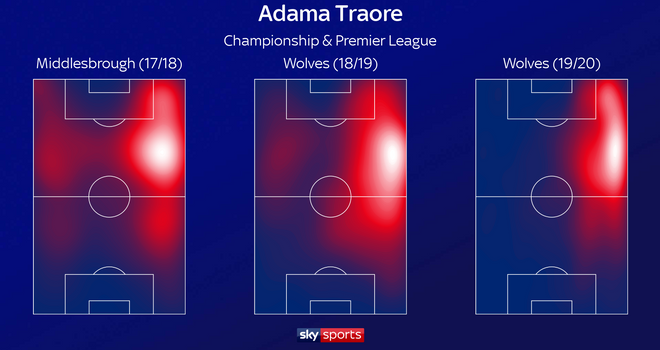 Traore worked in a more focussed area this season, primarily running the right channel and firing more crosses from in and around the corner flag - frequently finding the likes of Raul Jimenez to score 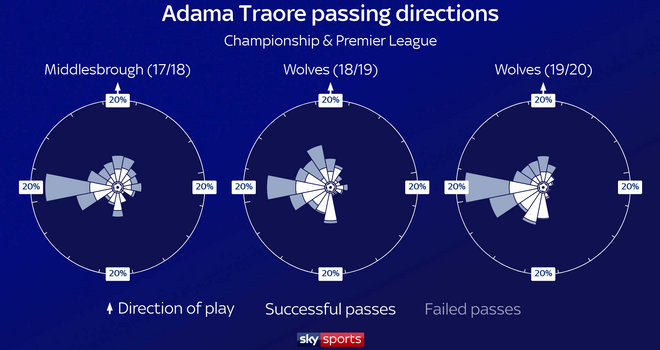 Traore is all about getting to the byline down his right channel and firing crosses into the box, or passing infield for a give-and-go to break behind opposition lines

"We were looking at two or three players, of which Adama was one. But Nuno was very insistent he wanted the player and he could make him better. Huge credit to him for that, I think every player has got an extra 15 per cent by working with Nuno. 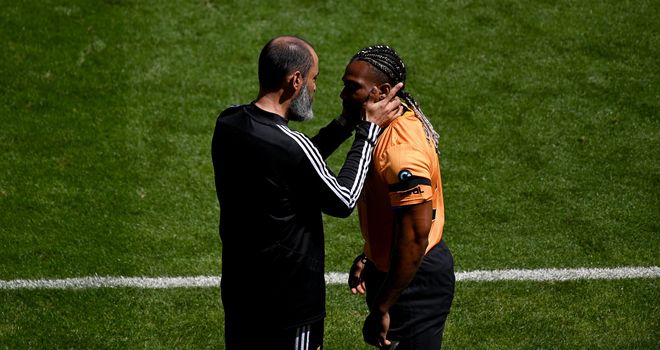 "£18m was a lot of money but I think we recognised if we could get him in the right spaces, the fee wouldn't be a lot for him or for us. That fee now looks very, very small. 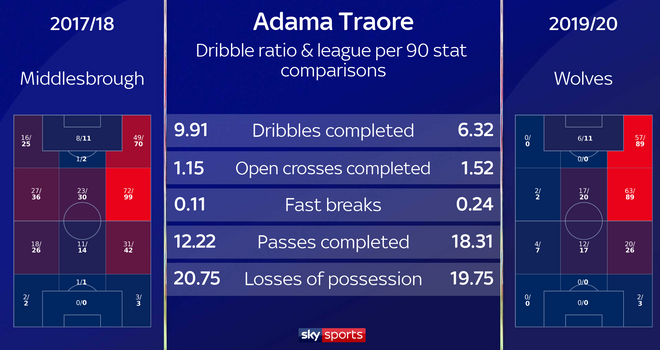 "The team now understands Adama, and Adama understands them. Leander Dendoncker will come tight, for example, to give Adama the space to go one-on-one, or one-on-three! He now has that consistency, is clear about how he plays, and he's been unplayable this season in certain games.

"Our recruitment department had conversations with his previous employers - clearly he has no ego, is a great lad, with great ability, but maybe he's not always perfect decision making with final pass. Again, Nuno has done an unbelievable job in making it clear what they want from him.

"The sky's the limit for him, if he doesn't get too big for his boots."