Marc Guehi has thrived since joining Crystal Palace from Chelsea in the summer; the 21-year-old also chats England U21 captaincy and learning his trade at Swansea; watch Arsenal vs Crystal Palace live on Sky Sports Premier League from 7pm on Monday Night Football, kick-off 8pm 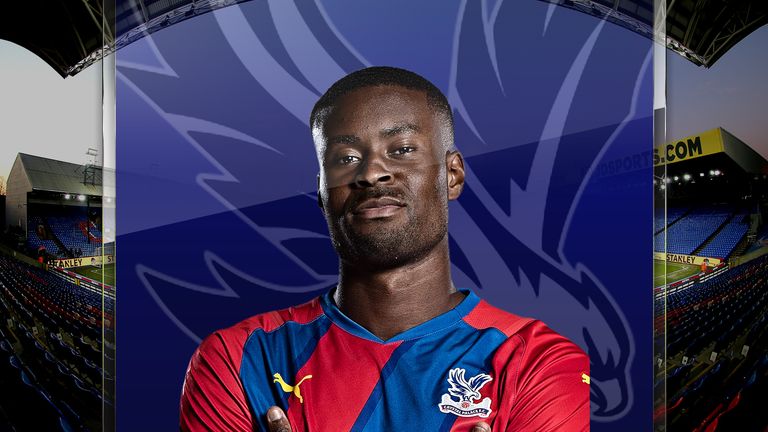 When chatting to Marc Guehi at Crystal Palace's training ground, his thoughtful and assured nature has you double-checking your notes to make sure he is only 21.

It has been a whirlwind few months for the young centre-back. Five days after his 21st birthday in July, Guehi signed a permanent deal at Crystal Palace, leaving his boyhood club Chelsea.

The move presented the opportunity to play under new manager, Patrick Vieira, and Guehi has slotted so seamlessly into the Palace defence, it is like he came through the club's own academy.

After two successful years on loan at Swansea, Guehi has returned to familiar territory in south London, and the defender agrees that it has been an almost trouble-free transition.

"One hundred per cent, and that's from the staff around me, the players around me - and the fans have taken to me since I've been here. Everyone has made it really easy for me," he said in an exclusive interview with Sky Sports ahead of Monday's meeting with Arsenal.

"I know the area quite well, I played for Cray Wanderers when I was young, so I'd say it's kind of a homecoming in a way. It's been fantastic.

"It was always a tough decision, leaving your boyhood club where you've played for so long. To leave was difficult, but for me, I thought it was the right decision to come to a club like Palace, where the direction they're going in is to give players like myself the opportunity to live out their dream and express themselves.

"I'm really glad I'm here and as I said, I think it was the right decision.

"It was the appeal of playing Premier League football regularly that attracted me, the appeal of the manager and the fact that this club is a really stable club. "They've made it a proper Premier League club and they've played in the league for a long time now. And since I've got here, the fans have been fantastic with me so I've really enjoyed my time so far."

Premier League experience doesn't come much bigger than that of Vieira, who has already overseen quite a turnaround at Palace. There is a buzz of excitement around Selhurst Park, with the Eagles losing just two Premier League games this season against early title frontrunners Chelsea and Liverpool, taking seven points from their first seven games.

The stats back it up too. Vieira's Palace are averaging around 50.1 per cent possession, shooting up from 39.9 per cent possession last season - the third-lowest rate in the division. Palace's passing accuracy has also increased from 76.1 per cent to 81 per cent, with fewer shots faced and goals conceded per game. There has also been an increase in shots at the other end too - an average now of 11 in each Premier League outing. "He's been fantastic with me," Guehi said of Vieira. "He's really helped me a lot, as well as the backroom staff who have been fantastic.

"I'm learning every single day - how to conduct myself as a young player that is hopefully developing into a leader for this team, developing my game individually, and things for me to work on.

"But he's just a really nice guy, that's the main thing, he's a really approachable person and he wants to share his knowledge with everyone.

"It's been an interesting start. Losing only to Chelsea and Liverpool, people might see that as a fairly good start, but with the manager coming in, there's been a real shift in mentality, or since I've been here anyway.

"As players, we're pushing each other and we expect more from each other and I think it's fantastic. We're going into games believing that we can win, and at the moment it's a process and we're all learning that.

"It's harsh in the games that we haven't won, we believe that we could have won many more and hopefully as we go through this process, we'll get the wins that we believe we deserve."

Perhaps one of the keys to Guehi's success - aside from his own talent - has been a consistent centre-back partner. Former Fulham defender Joachim Anderson signed on a permanent deal from Lyon, with the pair starting in the last six Premier League games. "I think it [the partnership] is going well. It's a bit disappointing that we haven't won that many games, but we've definitely got a good understanding and we're learning from each other as well.

"I'm definitely learning a lot from him, he's got a lot experience - he recently qualified with Denmark for the World Cup - so I'm really enjoying playing with him.

"He's played in the Premier League, he knows what the league is about. That makes it a lot easier for me, having someone next to me that has an understanding of the players we're coming up against and the league as well." Marc Guehi has recently been named as England U21 captain

If an impressive start to life in the Premier League is not enough, Lee Carsley named Guehi as his new England U21 captain in September, two years after his first appearance for the team.

The honour is the latest success for the defender at youth international level. He was part of the side that won the U17 World Cup in 2017 and finished as a runner-up at the U17 European Championships. At the Euros, Guehi was named in the team of the tournament.

Reflecting on his new captaincy, he said: "It's fantastic. I'm privileged and honoured. I wasn't really expecting it to be honest, but I'm relishing every opportunity I get to put the shirt on and wear the captain's armband.

"He is a player I’ve known for two or three years and straight away I was impressed with how mature he is, the way he talks about the game and influences the players off the pitch. The example he sets off the pitch as well as on it made it an easy choice. We have a lot of leaders in the team and in terms of the way he handled play in the Championship for Swansea and now at Crystal Palace, he is a player who was ready for the responsibility."

Lee Carsley after appointing Marc Guehi as his new captain

"I'm grateful that Lee Carsley picked me and it's a real stepping stone for me in my career to have this accolade. I'm going to do the best that I can.

"Hopefully one day [enough to play for the senior team], but I'm really focused on the U21s right now. I'm really glad that I have the opportunity and am wearing the armband so that's really the main focus right now, on the present that rather on the near future hopefully." Guehi's first foray into first team football came at Swansea City, spending 18 months on loan at the Welsh side under former England U17 manager Steve Cooper.

It was quite the whirlwind too. He spent a large part of his time playing in an empty Liberty Stadium due to the Covid-19 pandemic and participated in two play-off campaigns - unfortunately losing twice to now-promoted Brentford.

"It's absolutely crucial for any young player to go out and play in the men's game at a high level," Guehi reflected.

"For me, it was Swansea and they were fantastic with me. I played a lot of games and almost got promoted as well with them, but I thoroughly enjoyed it. My advice to anyone is to go out there if you get the opportunity to play because it's the most important.

"Some of the players there helped me a lot. I can name lots like Wayne Routledge, Andre Ayew, Matt Grimes, so many of them helped me to be where I am today.

"We’ll prepare as usual – it’s another game. They’re a really top side with fantastic players. We’ll definitely prepare in the right way, mentally prepare to make sure that come game time, we’ll be ready for whatever they throw at us."

"The main thing that I did learn was that the games are most important, making sure you're ready to compete at the highest level, but it was also a real family setting there as well. Everyone was really close, you knew what was going on with everyone, so that's a lot of what I took from there.

"It's hard for me to say that it was difficult [during the Covid-19 pandemic] because there were so many people who had lost their jobs and were going through really hard times. For me, I was still able to go out and play football and do what I love.

"It's hard sometimes to not see your family, but I was really fortunate to be able to play football and have the opportunity, regardless of whether there were fans or not, it was just being able to do something, whereas other people weren't able to."

It is this kind of selfless nature that will help Guehi to thrive in an increasingly exciting Crystal Palace side, as the Eagles' improvement under Vieira continues to take shape.