Leeds United: Why promising return to the Premier League could be better

The promise and profligacy of Leeds United's return to the Premier League assessed; watch Everton vs Leeds live on Saturday Night Football from 5pm on Sky Sports Premier League; Kick-off at 5.30pm Leeds United's performances this season have provided a long-awaited antidote after a 16-year absence from the Premier League - but could things be even better?

An unwavering belief in the philosophy which saw Marcelo Bielsa guide Leeds back to the big time has been rewarded with entertaining performances as the club set about re-establishing them in the top-flight.

Ahead of Saturday's trip to Everton - live on Sky Sports - Leeds sit just a point behind Manchester City in 14th having gone toe-to-toe the Premier League's elite, with only champions Liverpool having created more chances than the Yorkshire club this term.

But how does this stack up next to other newly-promoted teams over the years, and have Leeds made the most effective attacking start to life back in the top flight? Well, the answer is, almost. 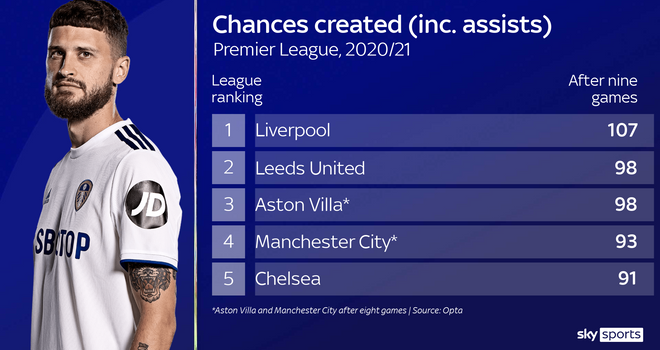 Leeds’ Mateusz Klich ranks joint-sixth in the Premier League for chances created this season with 16.

In their first nine games back in the Premier League, Leeds have registered 48 shots on target, the second-most of any newly-promoted side since Opta began collecting such data in the 2003/04 season.

Leeds' ability to create openings on goal has seen striker Patrick Bamford take his place among the early frontrunners in the race for the Premier League Golden Boot. Patrick Bamford has registered 16 shots on target this season, 33 per cent of Leeds’ overall total of 48

The 27-year-old has found the target seven times in nine appearances, a drastic improvement to the solitary goal he managed to score in his previous 27 top-flight appearances with Crystal Palace, Norwich, Burnley and Middlesbrough.

Leeds' return to the Premier League, and Bamford's scoring exploits, have undoubtedly been encouraging, but they could be better - much better.

Having earned an unwanted reputation for missing big chances during last season's promotion-winning campaign in the Championship, Bielsa's side are yet to shake off their profligate streak in front of goal.

Again, only champions Liverpool have squandered more big chances than Leeds, with Bamford the main culprit, accounting for eight of their 13 opportunities missed.

Bamford has come to typify the season Leeds have had in front of goal, with both he and his club developing a habit, according to expected goals data (xG), of scoring from unfavourable situations while squandering opportunities deemed easier on paper.

Take Bamford's performance against Aston Villa in October where his chances earned an xG rating of 1.56, but two stunning strikes saw him end the game with a hat-trick. The following week, however, against Leicester, an xG rating of 1.82 failed to yield a goal as Leeds were comfortably beaten 4-1 at Elland Road. 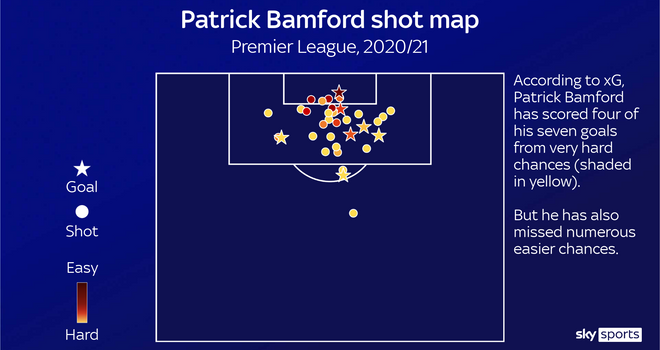 Patrick Bamford has developed a knack of scoring from difficult situations this season, but where would Leeds be if he converted the easier opportunities that came his way?

It may premature at this stage but come the end of the season, it's the kind of inconsistency that could come back to haunt Leeds and their bid to remain in the top-flight.

Thankfully, with 29 games of the season remaining, time is on their side. If Leeds can finesse their touch in front of goal and continue producing spectacular moments, they will fly even more than they already are.

Get all 8 Sky Sports for just £15 a month with our Black Friday half-price offer.