Barcelona interested in signing Sergio Aguero on free transfer; Argentine striker is to leave Manchester City at the end of the season; Aguero is Man City's record goalscorer with 258 goals in 387 appearances 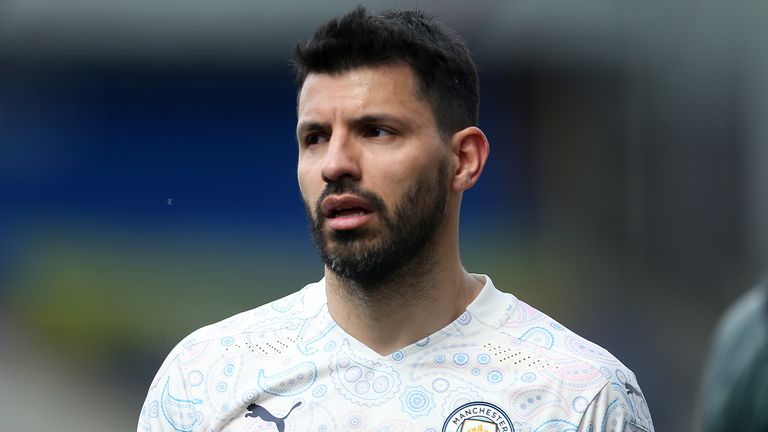 Barcelona have held initial talks with representatives of Manchester City striker Sergio Aguero over a free transfer this summer.

Aguero, who is City's record goalscorer with 258 goals in 387 appearances in all competitions, will leave the Etihad Stadium when his contract expires at the end of the season.

The 32-year-old Argentine spent five years playing in La Liga for Atletico Madrid prior to his move to City in 2011.

Aguero is targeting a treble in his final season with City, with the club in the final of the Champions League and on the verge of adding the Premier League title to the League Cup.

He has played a peripheral role this season under Pep Guardiola, making only 17 appearances, in part due to injury and illness, and scored just his fourth goal of the season against Crystal Palace on Saturday.

Aguero has been linked to several of Europe's top clubs in recent weeks, with Chelsea believed to be among the possible suitors should he decide to remain in the Premier League.

Barcelona are hopeful of persuading captain Lionel Messi, an international team-mate of Aguero, to remain at the club beyond this summer.

Aguero is the fourth-highest goalscorer in Premier League history, with his tally of 182 putting him behind only former England internationals Alan Shearer (260), Wayne Rooney (208) and Andrew Cole (187).

"It is a huge possibility as far as we know. Sergio Aguero has a desire [to play] for Barcelona. There is no catch. He is 32 years old. He knows perfectly the language, he knows La Liga, he knows the country and one of his best friends in football is Lionel Messi. It is said in Barcelona, Catalonia that there is a huge possibility for Joan Laporta (Barcelona president) to try and convince Messi to stay by signing one of his good friends Sergio Aguero after Luis Suarez left the club last year.

"In the last weeks and last months we have seen Messi more committed and comfortable. He is even fine with Ronald Koeman. We have seen him laughing in the games, winning the Cope del Rey. Now they are in the battle for the La Liga title and although many people said that he could go to Paris Saint-Germain, in my point of view Joan Laporta could be the key.

"Sergio Aguero can be one of the reasons for Messi to stay as Barca needs a striker, goals and needs a better sports project for the future to try to win for example the Cope del Rey, maybe La Liga and especially the Champions League which they have not won since 2015."