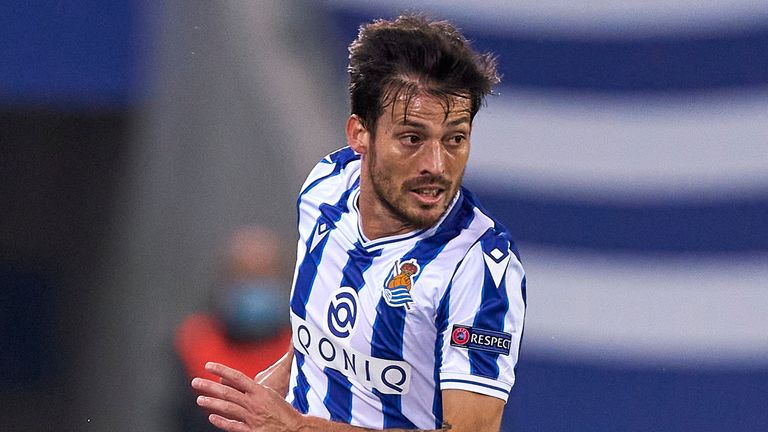 David Silva's midfield masterclasses have continued since returning home to Spain - and already has Real Sociedad supporters dreaming of a first La Liga title in 37 years.

The ex-Manchester City maestro, whose statue will next year stand immortal outside the Etihad Stadium, left the north west after 10 years in the Premier League earlier this year to complete a surprise move back to La Liga, having looked likely to sign for Lazio earlier on in the summer transfer window.

From the outside, the move to join a club with an unremarkable recent history, little in the way of major financial transfer investment and one runners-up spot in La Liga in nearly 40 years, may have looked uninspiring. But there was plenty to convince Silva to spend what may be his top-flight swansong on the banks of the Bay of Biscay.

Three months on from August, with La Real topping the early table, his decision looks a wise one, and the club can go three points clear of Atletico Madrid with victory at Cadiz on Sunday afternoon.

"I knew I was going to feel at home at this club," he told the Spanish media ahead of the international break. Although still a long way from leading the club to a fairy tale season, he has made the Anoeta Stadium his own, but far beyond his technical wizardry on the pitch.

Silva has been flanked by a trio of other former Premier League players too. Nacho Monreal has cemented himself in the left-back role since Yuri Berchiche's move to PSG in 2017, while Mikel Merino, who endured a frustrating spell with Newcastle United in 2017/18, has blossomed into a Spain international and was the club's star performer last season.

Adnan Januzaj, still only 25, and who once looked destined for the top at Manchester United, might just make it after all with La Real - although coronavirus, injury and the form of midfield rival Portu have restricted his minutes this season.

Any underdog hoping for a title charge would need a helping hand from Real Madrid and Barcelona, whose early-season demise has aided Real Sociedad to stand alone at the top of the early La Liga standings.

But the club's rise owes a lot to its own groundwork, scoring 20 goals across nine games and conceding only four times, with Silva pulling the strings in midfield.

Miguel Gonzalez, who covers the club for Basque newspaper El Diario Vasco, told Sky Sports: "Silva has come in to replace Martin Odegaard, who was on loan from Real Madrid last season. 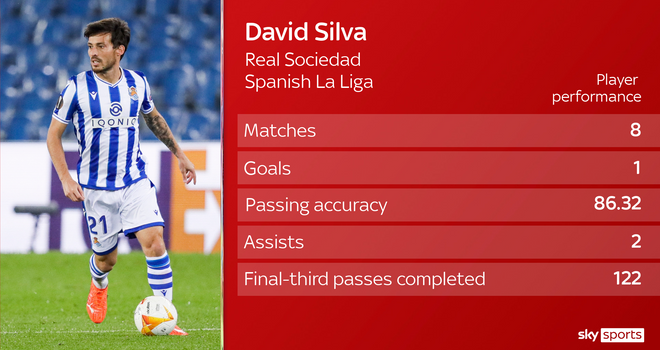 "Sociedad lost Odegaard back to Real, but last season he was one of the team's best players. At that moment, inside the club, people were thinking about Silva being available on a free.

"He was very close to joining Lazio, but finally Sociedad got in touch with him - and now he is playing even better than Odegaard was. Very much so. He has raised the level of the team as a whole.

"Silva makes the players around him better. Portu is another player who is playing at a higher level from last season. Silva is a player who plays important passes very well and taking into account Portu and Isak are very fast players in attack, and so having someone like Silva who can thread passes through makes a big difference.

"Physically, the fact he has not had many injuries and is in great condition, he has not looked like a 34-year-old."

Sociedad's rise to the early summit of La Liga has been a surprise even in these coronavirus-ridden times, but it is not down to coincidence. Ten years ago the club were close to their lowest ebb playing in Spain's second tier, but a long-term plan was already in place. It was the same vision which had taken them to the only two league titles in their history, in the early 1980s.

Back then, La Real's entire squad had come through the club's academy, a philosophy of promoting local talent cherished in the Basque region, and still shared by near rivals Athletic Bilbao in their recruitment policy.

The dream of emulating that success was born by academy director Roberto Olabe in 2002 and, nearly two decades on, is now bearing fruit. With Olabe now in the influential sporting director role, academy graduates have accounted for around half of the minutes played for La Real this season, and they make up two thirds of the club's first-team squad.

The division's top scorer, Mikel Oyarzabal, grew up barely 30 miles from Anoeta in Eibar. Club captain Asier Illarramendi, one of the dressing room's few inhabitants in their 30s, has played his entire career in San Sebastian, aside from a brief stint with Real Madrid half a decade ago.

Back when he first honed his vision for La Real, Olabe's ideology demanded an ingrained style of play throughout the academy - possession with purpose. In late 2018 Imanol Alguacil, who had helped nurture that style while leading the club's B team, was himself promoted from within to take on the head coach role.

In stepping up to the top job, he became the club's 10th manager in as many years. But Olabe, a man with the courage of his own convictions, was not concerned.

"A person who knows the identity of la Real, and has that character and grit that many of us value, can stay in the job for a long time," he said. "We already had a great coach at the club in Imanol and now we hope that he will be in the first team for a long time."

Two years on, he might raise a wry smile reflecting on his own quote. But on paper Silva, aged 34 and firmly into the epilogue of his career at the top, could not be further from his long-term vision. However, he saw quite the opposite; a player who had embodied - at the very top of the game - the philosophy he had spent so long establishing.

From the other side, Silva spotted a chance to pass on his years of experience, and success, to the club's next generation of players.

"The young players, his relationship is very close with them," Gonzalez told Sky Sports. "The players who have come through the academy would have grown up with him as an idol.

"One of the big players, Oyarzabal, his idol growing up? David Silva - and now they're playing together. You have to take into account he is tactically, physically clever, but he also has that influence for those players."

Could the dream become a reality? Even pushing for the title would mark an historic season for La Real, while Silva's part would provide the cherry on the cake for a side whose success has been long in the making, and required some steadfast belief to achieve.

And even for a man who has won four Premier Leagues, a World Cup and a European Championships, so might it prove for him too, at the end of his own esteemed career.