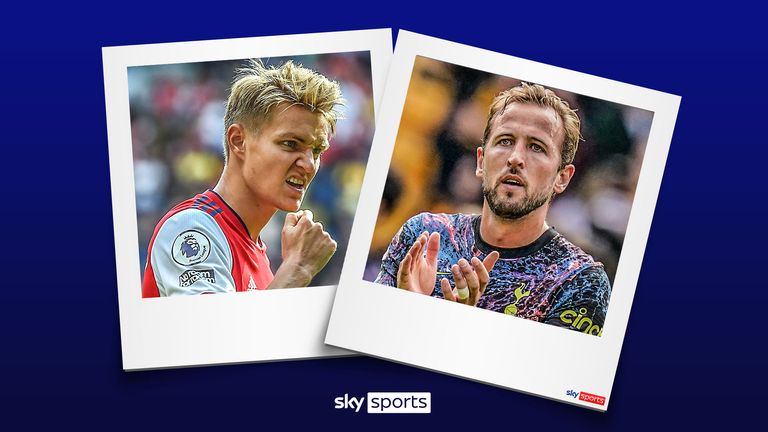 Arsenal host Tottenham at the Emirates live on Sky Sports this Sunday - but how do the teams' current styles and form fare ahead of the blockbuster clash?

Spurs kicked off the campaign with three straight wins and clean sheets, culminating in new boss Nuno Espirito Santo collecting the Manager of the Month award. However, back-to-back 3-0 defeats against Crystal Palace and Chelsea have followed, with disappointing performances to compound the results.

Conversely, the Gunners lost their opening three games but have since achieved two successive wins, against Norwich and Burnley - with a general sense of growing optimism surrounding Mikel Arteta's young, new-look side.

Against the Clarets, the Gunners deployed a front four behind Pierre-Emerick Aubameyang averaging merely 22 years old, while new signings Aaron Ramsdale, Ben White and Takehiro Tomiyasu all featured in the rearguard. In fact, Arsenal have the youngest average starting XI this season by some distance at just 24 years and 328 days. Spurs have primarily lined up in a 4-3-3 but used a 4-3-2-1 system against Chelsea, which saw Harry Kane spend the majority of the game out wide on the left with minimal involvement. 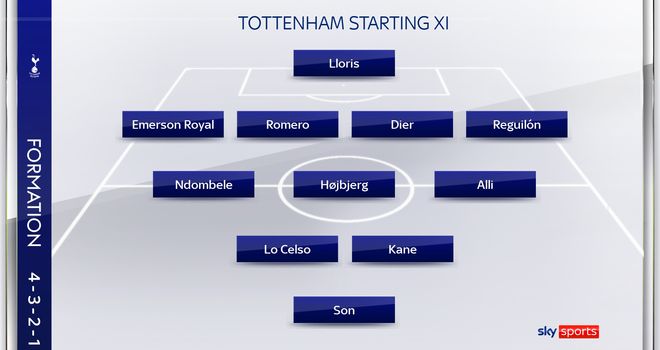 Arsenal have scored only twice but created 59 chances - only four teams have carved more. Expected goals data also supports the theory that Arteta's side could be on the right track up top. Indeed, the graphic below reveals an attacking intent with only the two centre-backs averaging in the defensive half.

Perhaps as a consequence of that, Arsenal have also been notably poor defensively with nine goals conceded, all shipped during Berd Leno's three successive starts in goal before being replaced a month ago by Ramsdale - who is yet to concede a goal.

Coming into this weekend’s games, Arsenal have used the most different players (26) and had the most starting XI changes (16) in the Premier League this season.

However, despite promising numbers up front and a defensive issue seemingly resolved, there does appear to be a lack of steel in the midfield, with the team ranking poorly for winning duels and recoveries. For Tottenham, the serious issue appears to be creating chances and kickstarting Kane into positions that utilise his predatory instincts. Spurs have created the fewest chances this season - just 32 to date - and only Leicester have attempted fewer than their 46 shots. For context, Manchester City have fired a league-topping 125 to date. 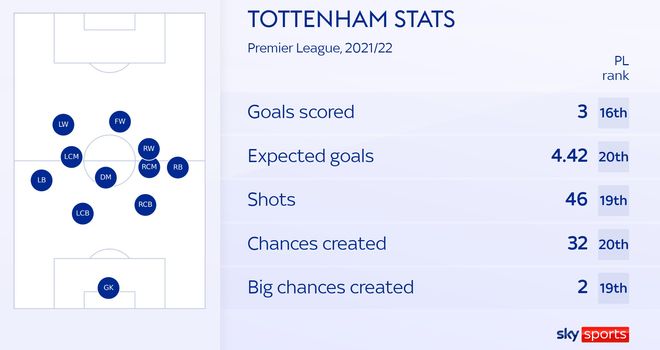 Additionally, Tottenham rank bottom for distance covered, below the likes of Crystal Palace, Aston Villa and Nuno's former side Wolves. Playing 30 minutes with 10 men after Japhet Tanganga's red card against Palace would contribute to the league-low coverage, but only marginally.

Despite the team's current deficit for physical exertions, the interactive table below reveals Spurs midfielder Dele Alli has actually covered more distance than any other player from both north London clubs, followed by team-mates Pierre-Emile Hojbjerg and Sergio Reguilon.

When factoring per-90 figures and players that have clocked 200 minutes or more, Martin Odegaard, Albert Sambi Lokonga and Bukayo Saka lead the way - while Pepe also leads for total sprints and fastest speed.

Drilling down deeper, the graphic below highlights Arsenal's tendency to shoot from all angles and distances, while xG figures on these attempts suggest the majority are highly speculative.

In contrast, Tottenham's shot map is notably sparse and has a clear dearth of attempts fired from inside the opposition's six-yard box.

In terms of creative hotspots, the maps below emphasise Arsenal's comparative abundance and diversity - attacking from central areas - long and short - and down both flanks. For Spurs, the clear route to goal is centrally, and often directly, and from the right-hand side - but currently create few opportunities from crosses. 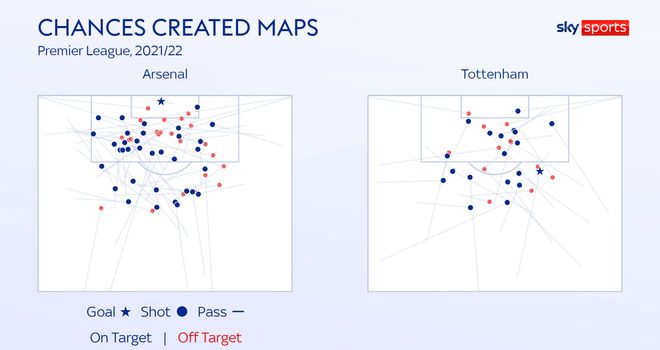 In terms of the players, Pepe is certainly due a goal and clearly still honing his clinical edge with 1.55 xG and still yet to find the back of the net - but the Ivorian also leads the way for mustering openings with 11 chances to date.

The passing networks below reveal Arsenal's full-backs and wingers exchange passes frequently, with the centre-backs also typically feeding wide areas. Spurs tend to build more centrally from the back than their London neighbours but still create, to a lesser degree, triangular combinations between full-back, midfielder and winger down both channels. The table below once again points to Son being Spurs' primary creative threat this term - in addition to scoring a team-topping two goals in the Premier League. Meanwhile, Spurs will attempt to stem danger at source by preventing Tierney and Pepe from firing crosses into the box.

When it comes to vulnerable areas, the Gunners are prone to conceding chances from long balls down their left flank, which are often launched to expose Tierney - who typically plays higher upfield than his right-sided counterpart - and from crosses fired closer to the byline down their right channel. 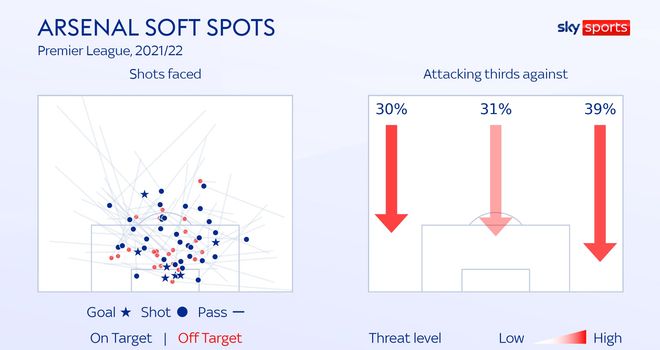 As referenced above, Spurs have gone from a three-game streak of clean sheets to shipping six goals in two games - so it is certainly too early to uncover any sustained weaknesses.

However, the chart below shows opponents primarily target Spurs' right flank, where Tanganga has started three out of five games and also started as a right-sided centre-back in the defeat to Palace, before seeing red on the hour mark. Can Kane kickstart his league campaign and can Arsenal maintain their reversal in form? You can watch Arsenal vs Tottenham live on Sky Sports Premier League from 4pm on Sunday; kick-off 4.30pm.