John Egan on the 'art' of defending, Jack O'Connell for England and why Sheffield United feels like home

'It's great to be able to play sexy football but defending's one of the biggest arts in the game and always will be'; Watch Aston Villa vs Sheff Utd live on Sky Sports on Monday; Kick-off 6pm 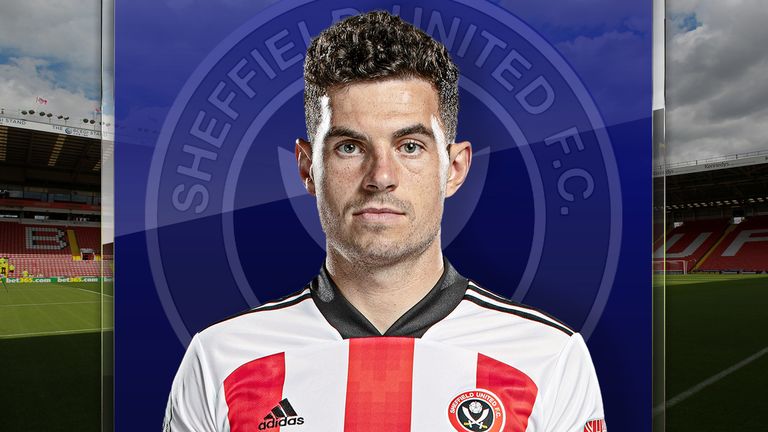 John Egan is smiling as he thinks about the frenzied Premier League season-opener between Liverpool and Leeds at Anfield. "Entertaining, wasn't it? Goals flying in everywhere! Like playing FIFA!"

It was certainly fun, the breathless to-and-fro between the champions and a Leeds side Egan admits "gave it a right go, to be fair" but the Sheffield United centre-back is thinking generally about the age of attack, considering his craft and speaking with conviction.

"It's great to be able to play sexy football but defending's one of the biggest arts in the game and it always will be."

It should be no surprise that Egan can apply the brakes now and then.

He is the anchor of an offbeat defence, the fixed point flanked by two overlapping fliers, the unheralded but undeniably vital component of a back three that last season helped United to a remarkable ninth-placed finish, conceding the fewest goals of any newly-promoted side in the competition's history.

They are affectionately known by their team-mates as The Pistons, Egan, Jack O'Connell and Chris Basham - "Bashy's dad, who works on the trains, came up with that one after we won promotion!" - but the Republic of Ireland international is the crankshaft, the backbone of the engine.

"The boys tear off on their overlaps and I'm usually hoarse, screaming at one of them to come back and mind the house in case there's a counter-attack!" he says with a chuckle during an exclusive interview with Sky Sports, ahead of Monday's trip to Aston Villa.

"It's funny, really. I can see the whole pitch so I have to put the reins on sometimes! But it's a good understanding we have and it's brilliant to be part of such a unique system." 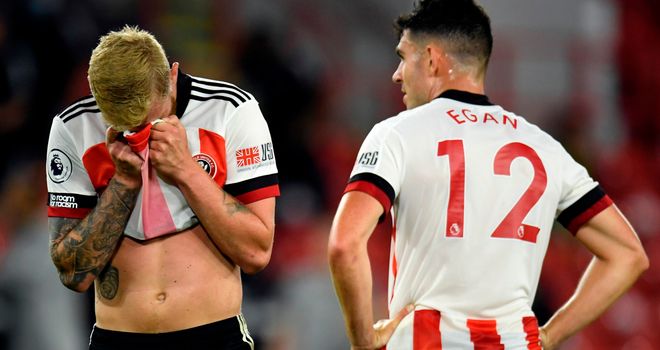 O'Connell was marooned between gold shirts after a blistering break for the first and then collided with Enda Stevens moments later to afford Roman Saiss a free header. Neither goal, Egan insists, could be blamed on Dean Henderson's £18.5m replacement, Aaron Ramsdale, whom he says has "settled in well".

"It was a sucker-punch. We had all that excitement building up to the first game of the season and before we knew it, we were two goals down. That's the league we're playing in. You give opponents like Wolves chances and they're ruthless.

"It was a shock to the system, so unlike us. But we didn't go under, we came back strong. There are positives to take, even if we have to make sure at doesn't happen again." 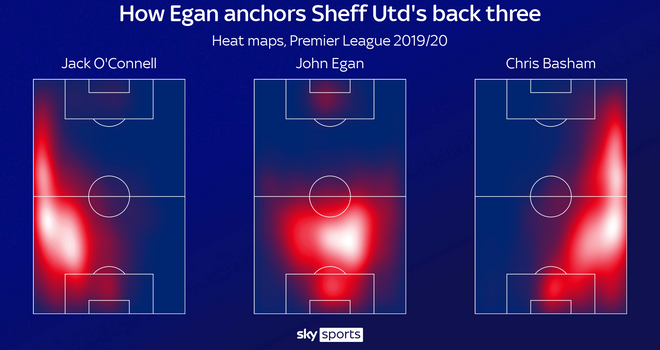 They did come back strong, even if the final ball was lacking, and it was unlike them. Only last season's top three had a better defensive record and it was perhaps the most compelling facet of Sheffield United's play in their memorable first season back, that such solidity was achieved while O'Connell was at the byline or Basham was slaloming into the opposition box.

It works because Egan is always there, scanning the field ahead and shouting himself hoarse; pulling in one of the midfield three for cover, playing short to feet for Oliver Norwood to launch one of his raking passes or sweeping the ball wide as the work to create one of those overloads begins. "You have to be a communicator in my role. You have to organise when you have centre-backs bombing on like wingers." 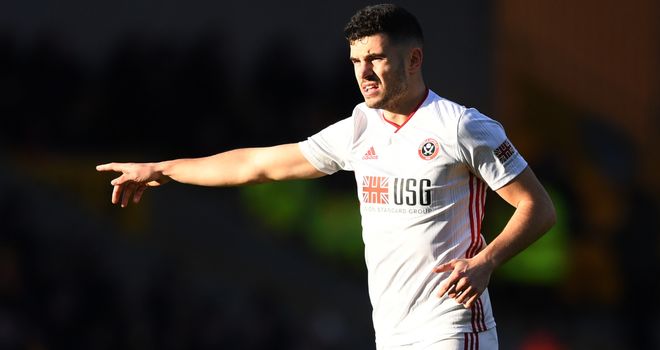 The boy from Bishopstown, Cork has broad shoulders now at Bramall Lane, a man emboldened rather than diminished by the weight of his name. John Egan Snr was a legendary gaelic football player during the 1970s and '80s - a statue honours him in Sneem, County Kerry - and Egan Jnr was desperate to follow, only to be gently pushed instead towards the sport in which he is finally thriving.

It took time, as it has done for so many in this Sheffield United side of late developers and born-again believers. Sunderland, his first senior club, sent him out on a series of unfulfilling loans - he lost his father unexpectedly as he was trying to make his way - before he emerged from his turmoil to catch the eye at Gillingham and then Brentford.

Chris Wilder had tracked him for a while before snapping him up two summers ago ago for a then-club record £4m. He was "a leader, a defender who defends properly," the Blades boss said at the time, and the following May he was leading off the pitch as well as on it with his boozy, euphoric promotion song that took a joyful pop at those who doubted a team of so-called journeymen. 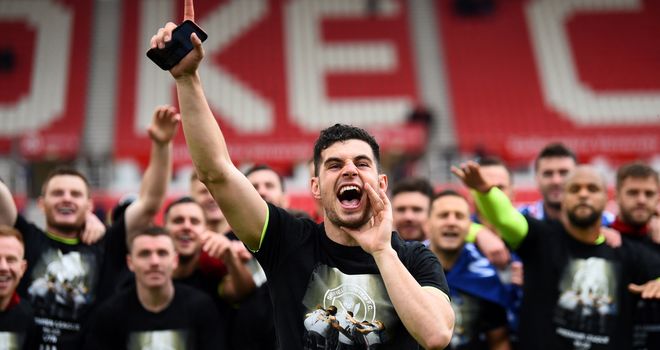 Egan was confident he could thrive in the Premier League - he has "always loved studying different scenarios," whomever he is up against - but the mental intensity is on another level now. "It's your concentration; you can't switch off for even seconds because the strikers don't usually need two chances to put the ball in the back of the net."

He was right up there in his first Premier League season - he made more interceptions and clearances than Virgil van Dijk and Caglar Soyuncu, the pair who made the PFA Team of the Year - but it is the unshowy, the intangible at which he also excelled: the ability to twist his hips and show quick heels; to read the pass, to anticipate danger, to second-guess the feint. Defending with the brain as well as the body.

That, he agrees, is underappreciated these days.

"Defending is an art. Teams who keep the most clean sheets usually win leagues; the tighter you can be as a unit, as a team, the better the chances of winning the game. 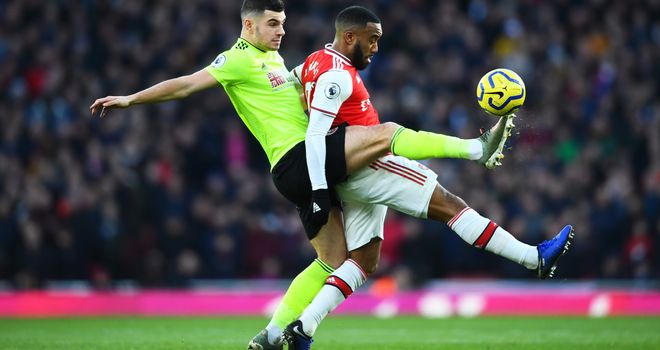 "The last few years it's all shifted to playing out from the back; every player on the pitch has got to be able to handle the ball - even the goalkeeper. You need to be good on the ball at the top level, that's certain, but you have to keep the ball out of the net too. In my opinion, there's a fine line.

"I think about Van Dijk - he wins all sorts of accolades but he defends first. For me, he's brought the art of defending back the other way."

Perhaps it was the burly battles of gaelic football, all those leaps and shoulder barges, that honed Egan's defensive instinct. The sort of instinct that saw him scramble head-first to the feet of Roberto Firmino at Bramall Lane last season to try and halt the ball's progress.

"You can't really teach it, I don't think. You need to have it in you. I think it's always been in me, ever since I started playing centre-half as a 14, 15-year-old. I just wanted to keep the ball out of the back of the net. I didn't like teams scoring against me.

"That's your number one job, in my opinion. It was certainly something we had in our brains last year: defend for your lives." 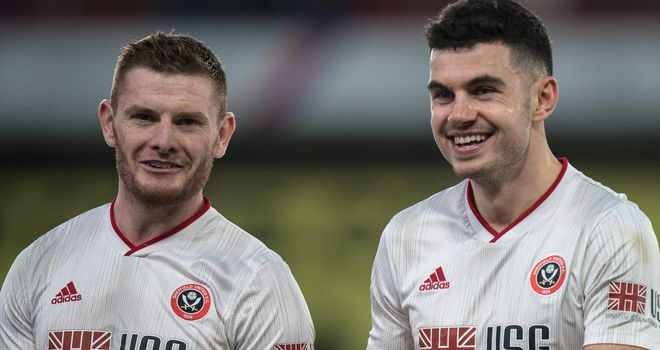 "I was very surprised that he didn't get it last season. He was playing out of his skin. He was so strong, both defensively and marauding forward.

"He's a modern-day defender, plays on the left side of a three, got a good left foot, got a great engine, can defend first and foremost and he can play… he can do it all.

"If he can keep those standards up, I'm sure that call won't be too far away."

They are close off the pitch as well as on it, Egan, O'Connell, Basham, all of them. It was one reason why the 27-year-old signed a new four-year contract at a club that gave him a "special feeling the moment he stepped through the door."

"It's not all about being born here… but it becomes home. It grips you, it gets you, this club."

He retreats to Cork and Kerry as often as he can - to drop in on a training session at Ballinaspig Lawn in Bishopstown, or sit with the bronze statue of his father in Sneem's South Square - but he knows what Wilder means when he says United "grips you and gets you"; the earthiness and honesty, the onus on roots and identity.

"In some ways it feels like you're playing for a GAA club back home because of the togetherness in the dressing room. When we got promoted it reminded me of winning the County Championship. The fans are unbelievable - hopefully it's not long until we have a full Bramall Lane again. It's just a fantastic club."

Sheffield United and Aston Villa played out a goalless draw at Villa Park in June - but the first Premier League game after the restart was overshadowed by a Hawk-Eye malfunction as Orjan Nyland carried an Oliver Norwood free-kick over the line.

"It was really bizarre. I was off celebrating then I couldn’t believe that they were on the counter-attack. Michael Oliver said his watch never went off. I said, 'You must be joking – he was in the net!' Bonkers. Now is the time to "kick on," he says; his team-mates are still "so hungry to improve". The challenge of the Premier League, with its glossy new attacking arrivals, remains a formidable one but he is drawn back to his craft, committed to making a case for the defence.

"We conceded the fewest goals by any newly-promoted Premier League team in history," he says, the stat committed to memory. "That's a big, big effort from the whole team and staff. We've set the benchmark.

"We want to win games - and we know we need to add more goals all over the pitch - but we have to still be hard to beat."