Manchester City are closing in on a deal in the region of £46.5m for Napoli midfielder Jorginho, according to Sky sources.

Sky Sports News understands that, despite reports in Italy, no deal has been agreed as yet.

A number of issues are still to be sorted, including payment schedules, add-ons and the possibility of a pre-season friendly between the two clubs. 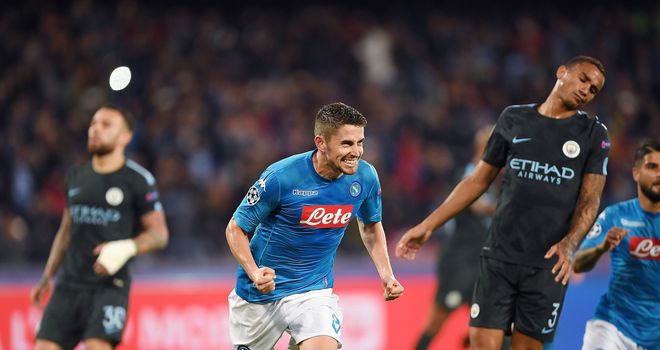 Jorginho scored against Manchester City in the Champions League in November

The Italy international has posted a picture on Instagram boarding a flight at the end of a family holiday to Brazil and is expected to head for Manchester for a medical whenever an agreement is reached.

Jorginho made 37 appearances for Napoli last season, scoring three goals, including one against City in the Champions League in November.

Transfer Talk: Why is Martial unsettled?

The Transfer Talk panel have the latest on the French forward's situation following claims he wants to leave Old Trafford this summer.

The 26-year-old started his career at Verona before moving to Naples in 2014 where he went on to win the Coppa Italia that year.