In an exclusive interview with Sky Sports News' Transfer Talk podcast, Jermain Defoe reveals his regret over handing in a transfer request at West Ham.

Jermain Defoe has admitted his regret at the way his exit from West Ham was handled during the early part of his career.

The forward joined West Ham from Charlton in 1999 at the age of 16 and within two years had become a first-team regular at the club, scoring 14 times during his breakthrough campaign.

But, after suffering relegation from the Premier League in 2003, West Ham faced the inevitable prospect of losing the best young talents in their squad, which also included Joe Cole, Michael Carrick and Glen Johnson.

Defoe, however, sparked fan fury when he handed in a transfer request to then-chief executive Paul Aldridge less than 24 hours after the club's relegation had been confirmed.

"The manner in which I left West Ham I would change. My agent, at the time, said I had to hand in a transfer request," Defoe, now 35, told the Transfer Talk podcast.

"When I was young, I didn't really understand transfer requests, I had never come across one before and my agent told me it was the right thing to do.

"I trusted my agent and I thought this must be the process - hand in a transfer request and when you do that, you would be the first out the door, that's what he said to me. 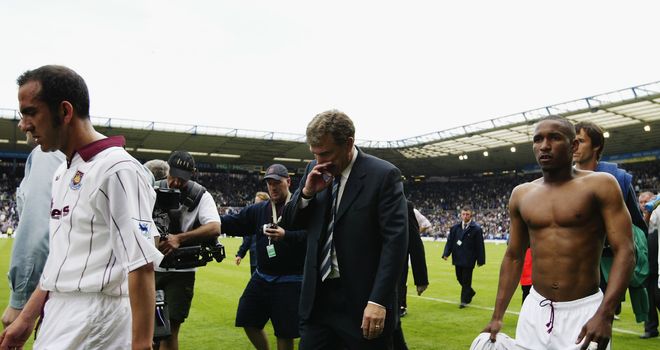 "I went to the stadium on my own and I handed the transfer request to Paul Aldridge - he even said to me 'Who has got you to do this?'

"He was gutted because he knew it had to come out at some point. He was really upset and said that he couldn't believe that my agent had got me to do that.

"He was saying 'You don't need to do this because if a football club wants you, they will come and get you'. At the time, I thought I was doing the right thing, but looking back I'd change that 100 per cent. I think it's disrespectful.

"I had signed for West Ham when I was 16 and it was one of the best days of my life - I walked into the canteen and saw Ian Wright, who was my idol since I could walk, then Rio Ferdinand, Joe Cole, Frank Lampard and Michael Carrick.

"The year before I was at Lilleshall watching the FA Youth Cup final and Upton Park was full, so the feeling I got when I got that phone call to sign for that club, it doesn't just go. I was happy there."