Summer transfer window state of play: Where each Premier League club stand ahead of new season With just three weeks to go until the start of the new Premier League season, we take a look at how each club have fared so far in the transfer market.

For the first time, the summer window will shut for top-flight clubs before the opening match of the campaign kicks off when Manchester United host Leicester City, live on Sky Sports Premier League on Friday August 10. Key rumours: Talks continue with Aaron Ramsey over a new deal, while Sevilla midfielder Steven N'Zonzi has also been linked, according to Sky sources.

Where are we at? Unai Emery has not taken long to get to work at his new club, splashing out more than £70m already on five new players. However, the new manager now says his recruitment is done - unless a "big opportunity" arises. Key rumours: According to Sky sources, Bournemouth are interested in Leganes left-back Diego Rico, £17m Levante midfielder Jefferson Lerma, and Brentford defender Chris Mepham, who they had a £10m bid for rejected in June.

Where are we at? Cherries manager Eddie Howe, who has made just one addition so far this summer, will want to find a replacement up front for Benik Afobe before the window shuts. Key rumours: Brighton are in discussions with Lille over a deal to sign Yves Bissouma, Sky Sports News (SSN) understands, while Chris Hughton is also closing in on Mamelodi Sundowns playmaker Percy Tau. Key rumours: Burnley had a combined offer of £25m for defender Craig Dawson and forward Jay Rodriguez rejected by West Brom, according to SSN, with the former having since handed in a transfer request. And they also remain in talks for Swansea midfielder Sam Clucas.

Where are we at? With Scott Arfield and Dean Marney having left Turf Moor this summer and veteran striker Jonathan Walters also set to depart the club, boss Sean Dyche will surely need to add to his squad having made no new signings so far. Key rumours: The Bluebirds will not allow winger Nathaniel Mendez-Laing to leave the club this summer, Sky sources understand, while Liverpool remain keen on Marko Grujic re-joining the club on loan. However, manager Neil Warnock has ended his interest in West Brom winger Matt Phillips.

Where are we at? Cardiff have signed four players during this window, spending more than £27m, but Warnock says he still wants "one or two" more before the new campaign starts. Key rumours: Doubts persist over the futures of Belgians Thibaut Courtois and Eden Hazard, with the latter saying "it might be time to discover something different". If the former leaves, Leicester's Kasper Schmeichel, Roma's Alisson, or even former No 1 Petr Cech may replace the 'keeper.

Where are we at? Maurizio Sarri has already brought Jorginho with him from Napoli for an initial £50m. But the new Blues coach may have to brace himself for the exits of Hazard, Willian and N'Golo Kante, with Barcelona reportedly chasing the latter two. If so, the expected arrival of CSKA midfielder Alexsandr Golovin, according to Sky Italy, could soften that blow. Could Wilfried Zaha be leaving Palace this summer?

Where are we at? Roy Hodgson's main challenge ahead of the new season will surely be to keep hold of key man Zaha, who according to Sky sources Dortmund want to sign, and Andros Townsend, a target for Newcastle. Key rumours: Everton want a left back, with Celtic's Kieran Tierney and Leverkusen's Wendell being monitored, according to Sky sources. Meanwhile, the club are in advanced talks for Bordeaux forward Malcom, but Barcelona defender Yerry Mina will not be moving to Merseysisde and Fenerbahce want winger Yannick Bolasie, SSN understands. New boss Marco Silva is also reported to be keen to team up with Richarlison, who he worked with at Watford last season.

Where are we at? Marco Silva let striker Wayne Rooney join DC United in June, which is maybe why the new manager then refused to allow fellow forward Ademola Lookman move to Leipzig for £12m. The Portuguese, who has so far signed no new players, is understood to be willing to give youth a chance at Goodison next season. Tom Cairney has extended his contract at Craven Cottage

Key rumours: According to Sky sources, Fulham are keen on both Young Boys right-back Kevin Mbabu and Southampton left-back Matt Targett. Meanwhile, they also remain in talks for Newcastle forward Aleksandar Mitrovic, who they are confident of concluding a deal for. However, Wolves have rejected their £12m bid for forward Ivan Cavaleiro.

Where are we at? The Cottagers have captured midfielder Jean Michael Seri and defender Maxime le Marchand from Nice for a combined £30m. But perhaps the best signing the club have made this summer was that of Tom Cairney, who has agreed a new five-year deal at Craven Cottage. Terence Kongolo has joined Huddersfield in a club-record deal

Key rumours: Top-flight goals were hard to come by for the Terriers last season, which is probably why boss David Wagner is currently chasing Monaco striker Adama Diakhaby, according to Sky sources.

Where are we at? Huddersfield splashed out a club-record £17.5m in order to bring Monaco defender Terence Kongolo to the John Smith's on a permanent basis earlier this summer, one of six new arrivals so far this summer at a combined cost of almost £30m. 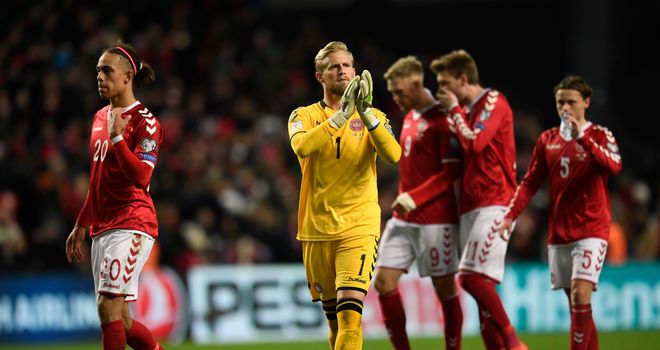 Could Kasper Schmeichel (centre) be leaving Leicester this summer?

Where are we at? Having recently sold Riyad Mahrez to Man City for £60m, Claude Puel has money to spend. However, the Frenchman may need all of that cash to replace the Algeria playmaker, with Grealish a possible contender to take on his role at the King Power next season. Liverpool have made moves for Roma No 1 Allison .

Key rumours: The Reds' summer has been dominated by their on-off move for Lyon playmaker Nabil Fekir, with the Ligue 1 club's president even recently suggesting that the big-money transfer may now be back on. The Reds may let forwards Divock Origi and Danny Ings leave before the new season starts.

Where are we at? Jurgen Klopp has declared himself happy with his club's transfer business, with no top-flight side having spent more than the £176.95m Liverpool have forked out on players so far this window. However, their most important signing of the summer was tying Mo Salah down to a new long-term deal in July. Key rumours: According to Sky sources, City are unwilling to meet Real Madrid's valuation for midfielder Mateo Kovacic. However, the champions are considering a move for Southampton's Mario Lemina, while Oleksandr Zinchenko is also still likely to leave.

Where are we at? Pep Guardiola missed out on his first-choice midfield target, Napoli midfielder Jorginho, who instead joined Chelsea in a £57m deal. And City have also let 21 players leave the Etihad so far this summer. Where are we at? 'The Special One' has added just three players so far this window, although that did include the £61.2m capture of Brazil midfielder Fred. However, Marouane Fellaini signed a two-year contract extension at Old Trafford in June, with the option of a further 12 months. Kenedy has re-joined Newcastle on loan from Chelsea

Key rumours: According to SSN, Newcastle have spoken to West Brom about signing Salomon Rondon, but are unlikely to meet the striker's £16m release clause unless they sell forward Aleksandar Mitrovic.

Where are we at? Rafael Benitez has admitted he must "wheel and deal" in this summer's transfer market after bringing in Martin Dubravka, Ki Sung-yueng and Kenedy. And skipper Jamaal Lascelles says he is concentrating on playing for the club next season, despite interest from West Ham. Key rumours: The club are not believed to be targeting Liverpool forward Ings. Meanwhile, there may be more players leaving St Mary's, with Matt Targett and Steven Davis interesting Fulham and Rangers respectively, say Sky sources. And the Saints will also listen to offers for Fraser Forster.

Where are we at? Mark Hughes has spent £55.5m on four new players, with 11 leaving the south coast - including Dusan Tadic to Ajax - as the new boss tries to ensure there are no more relegation scraps next season. Talks continue over Jack Grealish's move from Villa to Spurs

Key rumours: Spurs want midfield additions, with Lyon's Tanguy Ndombele and Aston Villa's Jack Grealish being monitored, according to Sky sources. But defender Toby Alderweireld has admitted he still unsure about his future at the club, while Juve, Napoli and Inter are all interested in midfielder Mousa Dembele.

Where are we at? Mauricio Pochettino has so far failed to bring in any new players in this window, although perhaps the north London club's best signing this summer has been tying striker Harry Kane down to a new six-year deal in June. Key rumours: Sky sources understand former City midfielder Jack Rodwell is currently on trial at Watford, while Torino are one of a number of clubs interested in midfielder Roberto Pereyra. And ex-boss Silva, now at Everton, is also reported to be keen to work again with Brazil forward Richarlison.

Where are we at? Javi Gracia has spent £24m on six new recruits this summer, £15m of which went on turning winger Deulofeu's January loan from Barca into a permanent move. Where are we at? Only Liverpool have spent more than the £94.9m that West Ham have on seven new players -including a club-record £35m on Brazil international Anderson - this summer. And joint-chairman David Sullivan has even said the club are determined to make more signings before the window shuts in August. 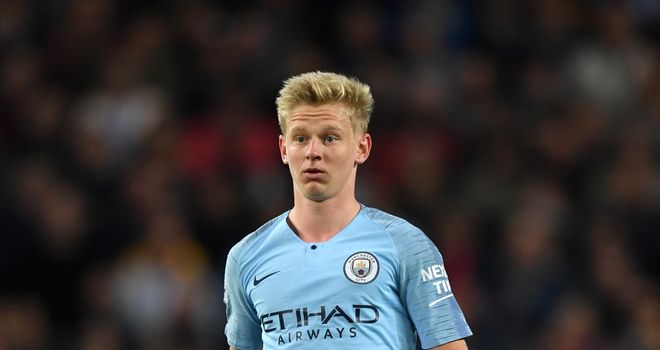 Could Oleksandr Zinchenko be joining Wolves?

Key rumours: SSN understands Wolves made a club-record £16m offer for City left-back Zinchenko earlier this summer, while they are also keen on Juve striker Andrea Favilli, according to Sky in Italy. However, the top-flight new boys have rejected a £12m bid from Fulham for forward Ivan Cavaleiro, according to Sky sources.

Where are we at? Wolves coach Nuno Espirito Santo has spent £35.9m on bringing eight new players to Molineux since guiding the club back to the Premier League last season.