Crystal Palace are in talks with West Ham over the signing of midfielder Cheikhou Kouyate, according to Sky sources.

Sky Sports News revealed earlier this month West Ham were willing to listen to offers for Kouyate and value him at around £10m.

The 28-year-old, who only recently returned to training after appearing for Senegal at the World Cup this summer, has three years remaining on his contract at the London Stadium.

Kouyate joined West Ham from Anderlecht in 2014 and has since scored 15 goals in 147 appearances for the east London side.

West Ham manager Manuel Pellegrini has already added seven new players to his squad ahead of the new season and revealed on Tuesday he could make further signings before the close of the transfer window. 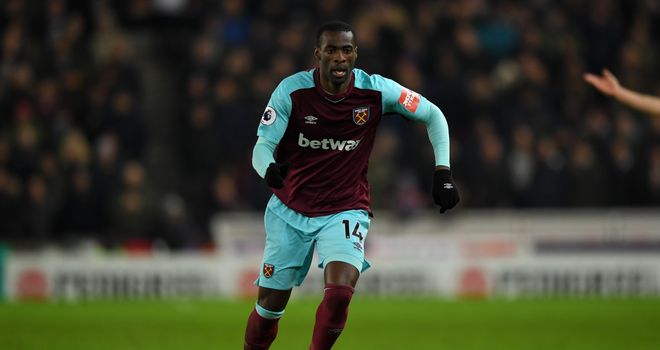 But it is understood he will need to raise funds through player sales following a £94.9m spend, with West Ham also in advanced talks with Sampdoria over the sale of midfielder Pedro Obiang.

West Ham are also understood to be willing to sell Michail Antonio before the August 9 deadline and are prepared to consider offers of more than £15m, with Palace interested in signing the winger.