Kaide Gordon set to join Liverpool from Derby in a deal that could reach £3m; Manchester United were also tracking 16-year-old forward, who can play out wide or through the middle; Gordon expected to link up with Liverpool's academy side 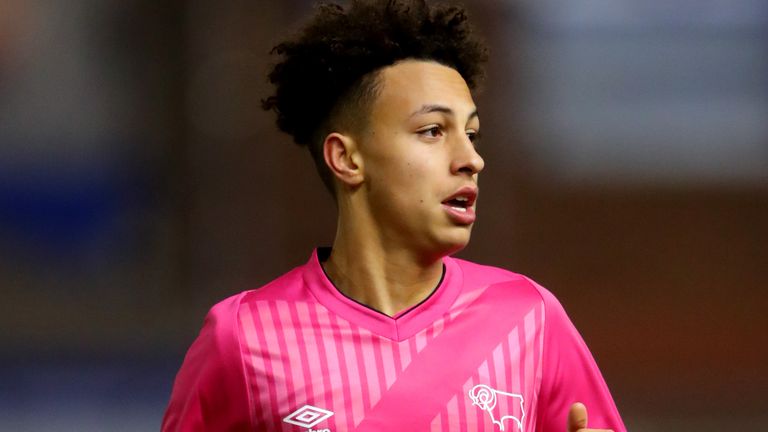 Kaide Gordon made his senior debut for Derby last month

Liverpool are closing in on the signing of Derby youngster Kaide Gordon and a deal could be completed as early as Tuesday.

The 16-year-old will join Liverpool for a fee that could reach £3m and is expected to link up with the academy side.

Manchester United were also keen on Gordon, a forward who can play through the middle or out wide, but look to have been beaten by their great rivals.

Gordon made his senior debut for Derby against Birmingham in the Championship last month, after which Rams boss Wayne Rooney said: "I brought Kaide up with the first team initially to train with us for a week to see how he reacted to it, and he was one of the best trainers.

"I kept him with us for a couple of weeks and he's been training at the same level - if not to a better level - than a lot of the other [first-team] players."

Gordon could be one of a number of Derby academy products to leave the club during the January transfer window as they bid to raise funds.

A delay in the protracted takeover of the club by Sheikh Khaled's Derventio Holdings has meant Derby remain in a difficult financial situation.

There are serious doubts over whether the purchase of the club will be completed, despite a deal for owner Mel Morris to sell the Rams to billionaire Sheikh Khaled being reached in November.

Derby have been under a transfer embargo and their first-team players were only paid their December wages this week.