Liverpool: How can they improve?

What next for Liverpool? Why Mohamed Salah's changing role means Liverpool might need to look for a new forward... Liverpool have not even had the chance to wrap up that first league title in 30 years yet but such is the capacity for football to throw things forward – even when at a standstill – that it feels natural for thoughts to turn to how Jurgen Klopp's side might be able to improve. Not easy with a team that was on course to break the Premier League points record.

One upgrade that has been mooted is the acquisition of Timo Werner. The 24-year-old German is rated among the top prospects in Europe, boasting an impressive scoring record at RB Leipzig. Although primarily a centre-forward, Werner is capable of playing anywhere across the front line. So who would he replace in Klopp's first-choice starting line-up?

It might seem extraordinary given his record for Liverpool but Mohamed Salah might be the supporters' choice.

"I think Mo Salah is seen as world class by those on the outside but with Liverpool fans I think he is a little bit underappreciated," said Carragher, speaking on Monday Night Football. "Certainly going from that first season to what he is doing now, there has been a bit of a dip. But he was never going to score another 47 goals in a season.

"I think Liverpool have got six world-class players. I think if you asked Liverpool fans whether they would take big money for the other five, they would all say no, no matter what the money. There is no way they would sell Alisson or Virgil van Dijk. But if you offered them £130m for Salah, they would think about it. That is why I say he is underappreciated."

Salah turns 28 in June. At that point he will be the same age as fellow forwards Sadio Mane and Roberto Firmino. All three can lay claim to being at the peak of their powers, but that is actually part of the problem. The trio risk growing old together if Klopp is not proactive in freshening up Liverpool's forward line.

Speaking to the former Liverpool manager Roy Evans recently, he was reflecting on how the club relinquished their position at the top of the English game after that previous league title win some 30 years ago. The failure to plan effectively for the future, allowing the team's world-class players to fade away, was an error that proved costly.

In an exclusive interview with Sky Sports, Roy Evans lifts the lid on his career at Liverpool

"When you are top of the league," Evans told Sky Sports, "you have to make sure that you keep dominating and keep bringing in players who are able to keep you in that position."

In truth, Liverpool were also guilty of discarding players too soon back then. Peter Beardsley and Ray Houghton had more to offer. John Barnes stayed and provided many more years of fine service but he was never quite the same again after the hamstring, calf and Achilles problems that he suffered at the age of 28. It can be a tricky time for a wide forward.

Salah's decision-making can still improve. The mental side of the game could yet allow for greater consistency. But that explosiveness on which forwards rely - and he was recently clocked among the seven fastest players in Europe - risks being compromised in the years to come. He might be able to adapt his game but what is certain is that he will have to.

Football's dribbling age curve could not be more clear. Examining data collated from years of Premier League matches reveals that the number of dribbles completed by the average forward declines throughout their career. In short, dribbling is a young man's game.

Salah is not the average forward, he is rather more exceptional than that. But while his dribbling numbers are higher than most, the trend throughout his three seasons as a Liverpool player is unmistakable. The numbers are only going one way.

The sustained excellence of Lionel Messi and Cristiano Ronaldo well into their thirties might sway some into thinking there is a new normal but there is nothing normal about those two.

Look instead to the previous five forwards to have won the Ballon d'Or. Kaka, Ronaldinho, Andriy Shevchenko, Ronaldo and Michael Owen were all well past their best by their late twenties. Some were even in semi-retirement. The optimum time to sell had already passed.

Salah could avoid that fate if free of injury and distraction but his game will need to evolve. Cristiano Ronaldo did that - eschewing the dribbling of his younger days to become a power forward, utilising his formidable intelligence, heading ability and finishing prowess to thrive. Barnes swapped the left wing for the centre of midfield as his skill-set changed. 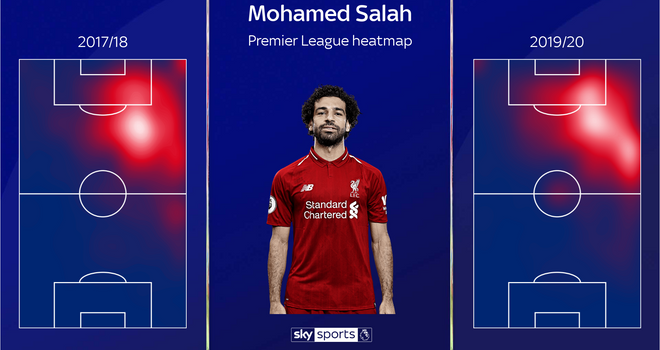 Salah's heatmap this season compared to his first season with Liverpool

What sort of player will Salah become two years from now? Klopp has already adjusted his position in order to maximise his strengths, often deploying him in a more central role and relieving him of the defensive duties that are customarily assigned to the right winger.

It is a recognition of Salah's key qualities - running through on goal to great effect from that inside right channel. But it is also an acknowledgement that he has become much more effective there than when up against the full-back one-on-one out on the flank.

In short, the names may have to change for Liverpool to stay the same.

Should they sell Mohamed Salah? Probably not. But expect him to continue to develop into a player who does his best work closer to the opposition goal. And that means that Liverpool's search for a player who can do what he has done these past three seasons must not be allowed to stop.