We run the rule over German starlet Marko Marin 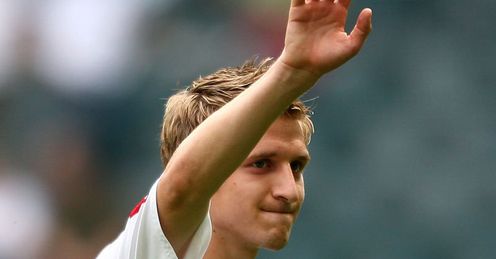 Sky Sports Scout is our exciting new feature where we scour the globe looking out for the best talent and bringing you a report on what we find.

Also, if you want to nominate somebody to feature, please get in touch using the form below.

Up this week for the scout is Borussia Monchengladbach's Marko Marin who was recommended by Sky Sports reader Edwin Jones.

Seldom has the arrival of a youngster playing for a newly-promoted team been the cause of so much attention as that of Borussia Monchengladbach starlet Marko Marin.

The diminutive 19-year-old winger hit top form in the spring of this year, forefronting the Foals' return to the top flight. Marin's four goals and eight assists in the second half of last season not only helped him be voted Gladbach's player of the year by the club's fans, but also earned him a spot in Joachim Low's provisional squad for Euro 2008.

The Bosnia-born youngster made his international debut in a warm-up game against Belarus before surprisingly failing to make the final cut. Low, however, included Marin against Belgium in Germany's first game since the finals and he scored in a 2-0 victory, showing he has has the potential to play a role in the manager's 2010 plans.

Technically gifted and possessing a sweet left foot, Marin kept both fans and opponents continually guessing last season and now most experts are curious to see how he will fare against top-class Bundesliga defenders in a year in which Gladbach are expected to battle relegation.

There is little doubt that Marin has the natural ability to make it to the top of both the national and international game in the near future. If he can continue to work on his tactical awareness and physical presence in his first full year in the Bundesliga, he could play a crucial role in Germany's 2010 World Cup challenge in South Africa.

You have read our opinion of Marko Marin - now we want your views. Have you seen Marin in action? Do you agree with our assesment? Do you think he will make it?

And if you have spotted anyone you think we should feature then please get in touch using the same form. We will look to send out the Scout to follow up some of your leads.