We run the rule over Brazilian starlet Neymar 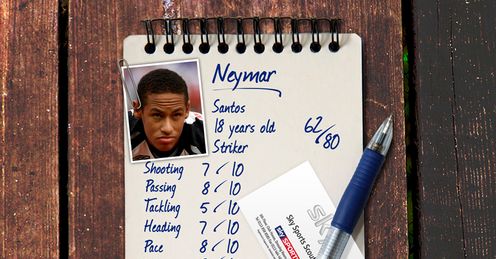 You can only nominate a player by emailing here, including the word 'Scout' in your subject line and please check to make sure we haven't already covered the player!

Should your player get reviewed by our scout, and you were first to send in his name, then you will win a copy of Football Manager 2010.

Many Brazilian players are hyped beyond belief, but some are often put on a pedestal - highlighted as the best of their generation.

Neymar is the latest to be handed this label, but is he capable of baring it? Sky Sports Scout takes a close look.

The 18-year-old has come through the ranks of Santos - which has played a part in him being labelled the 'New Pele' and the 'New Robinho'.

Similar in stature to both those Santos legends, he is also an attacker - who can play out wide or as a central striker.

Neymar has long been heralded as a true star of the future, indeed since he was 13 he was being tipped to be the next Santos legend.

He made his debut in 2009 but he hit double figures in his first season and the scouts were already flocking to see him in action for both Santos and with Brazil's youth side, and they have been continually impressed.

He is already on his way to double figures this season and there is genuine belief he is the real deal and the best export from Brazil since Alexandre Pato.

Real Madrid, Barcelona, Chelsea, Manchester City and Inter Milan are amongst those battling it out.

And it is fair to assume Santos will reap some huge benefits when they opt to sell.

But is he worth the near £30million price-tag being bandied about?

Neymar is a prodigious talent, no doubt about it - and he does look well equipped for a huge future in the game.

At just 5ft 8in, he is a diminutive figure - but his skill makes his physique inconsequential.

Brilliant with both feet, he can attack at pace - at will. And he likes to shoot, not always accurately but his finishing is improving all the time.

Whether he has the attributes at this moment for European football, it is hard to tell. But with the likes of Pato and Keirrison before him having such contrasting fortunes upon their moves to Europe - we may have to wait for his arrival to decide.

And yes ideally, a couple more years in Brazil would be ideal preparation for him - but with huge amounts of money ready to be splashed on him, that appears unlikely.

You have read our opinion of Neymar - now we want your views. Have you seen Neymar in action? Do you agree with our assessment? Do you think he will make it?

And if you have spotted anyone you think we should feature then please get in touch using the same form. We will look to send out the Scout to follow up some of your leads.