We run the rule over UAE starlet Omar Abdulrahman 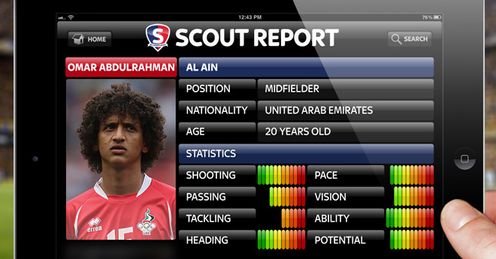 Should your player get reviewed by our scout, and you were first to send in his name, then you will win a copy of Football Manager 2012.

Omar Abdulrahman, also known as Amoory, emerged as one of the real talents of the Olympic tournament. We run the rule over the UAE playmaker.

Abdulrahman was born in Riyadh, Saudi Arabia - to a family of Yemeni descent. Despite their poor surroundings, his footballing talent quickly emerged and he attracted the attention of some of Saudi's biggest clubs.

Al Hilal wanted to sign him, offering him Saudi citizenship as part of the deal - but he rejected the move as his family were not offered the same.

He was then spotted by former Saudi international Sami Al Jaber, who is scout for UAE giants Al-Ain, and they agreed to move him to the Emirates and grant his entire family citizenship, which sealed the deal.

He joined the Al-Ain academy in 2008, but within a year was promoted into the first team by German coach Winfried Schafer after he spotted him during an Under-17 tournament. During the same tournament, Abdulrahman was scouted by Spanish club Espanyol and they made an offer, but failed to agree terms with Al Ain.

In early 2009, Abdulrahman made his first-team debut and gradually became more and more involved with the squad. By 2010, he was a key member of the side.

But in 2010 he also suffered the first of two cruciate knee injuries in the space of 18 months.

However, Abdulrahman has bounced back to full fitness and by January this year was back in action and that meant he was able to win his place in UAE's Olympic squad, although he is already a full international with four caps to his name.

In London, Abdulrahman performed exceptionally well in all three games - particularly against Uruguay and Great Britain.

Most European sides were keeping a close eye on the Olympics and there is little doubt that Abdulrahman has emerged as one of the brightest talents. It is little surprise he has been taken on trial by Manchester City.

A diminutive, but not slight figure, Abdulrahman likes to operate in central midfield. Attack-minded, his first thought is always how can he open up the opposition's defence.

He has a wonderful left foot, which he uses with great precision. His vision is top draw, and he likes to pick a pass from deep.

He is guilty at times of coming too deep for the ball and getting caught in possession, but he is never afraid to get back in possession and try again.

Abdulrahman also has an eye for goal and has scored over 14 goals in just 35 appearances for Al-Ain.

If he impresses during his current trial spell with Manchester City, he could very well find himself signing for the Premier League champions - although a loan spell would likely follow.

Perhaps not quite ready for the English top flight, there is little doubting he has the potential to become one of Asia's top players.

You have read our opinion of Omar Abdulrahman - now we want your views. Have you seen Abdulrahman in action? Do you agree with our assessment? Do you think he will make it?