Wolves boss Bruno Lage is a big fan of staying up late to watch events unfold on Deadline Day - but he will not be if any late drama takes Adama Traore away from Molineux on August 31.

The new Wolves boss inherited a squad in need of some rejuvenating when he arrived in the West Midlands in June, after a season where the club lost Diogo Jota to Liverpool, and saw their lack of depth exposed by Raul Jimenez's long-term injury in November.

Something was clearly missing to get the club back to the levels of the seventh-placed finish it managed under Nuno Espirito Santo in 2019/20, especially under the new manager's contrasting playing style. "I've said to the players, we are an offensive team," Lage tells Sky Sports as he previews Wolves' game with Manchester United on Super Sunday this weekend. With the clock ticking down to the end of the transfer window, press conferences are still dominated by talk of outgoings.

Links between Ruben Neves and Manchester United have gone quiet as August 31 approaches, but after their midweek Carabao Cup win at Nottingham Forest, where the manager's oil-laden winger Traore was a second-half substitute, his future and a long-rumoured move to Tottenham was again among the main post-match topics.

Lage's standpoint could not be clearer. He is looking to strengthen his options, not weaken them, and so his plans certainly do not include any idea of losing the explosive power of the 25-year-old, who has registered the highest xG of any Premier League player so far this season.

Earlier in his career the Wolves boss worked in England as an assistant to Carlos Carvalhal at Sheffield Wednesday and Swansea, and though a keen fan of Transfer Deadline Day back then, he might be more tempted to turn his phone off in the final hours of August 31 this year.

Lage tells Sky Sports: "When I was here before, my favourite day was to stay up watching TV on Deadline Day until 11pm to see what happens on the last day.

"I still remember four or five years ago a Portuguese player coming over to Leicester. Adrien Silva, wasn't it? After the last minutes, when the fax machine missed the time. It's an emotional day, and until the end it'll be exciting.

"Of course, we want to keep Adama. We are doing well, but we are few in number, we need more players. I don't think about anyone leaving, I want to think about guys coming in. 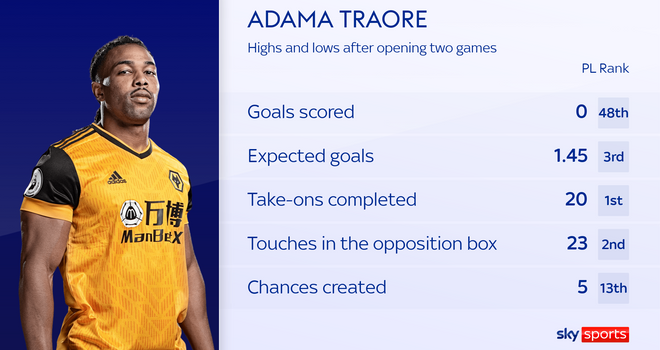 "We need to be there, we need to be competitive. If we miss out on one player, at night everyone, me, the chairman, the fans, we go to sleep at night because we have another one to go for.

"We need a few, but five days is a long time in football. Especially in the transfer window. We want to create that competitive squad, which I think we can do in that time."

Traore has been given more attacking responsibility in the new regime, registering the most shots in the Wolves team so far, but missing their best chances, both one-on-ones, in games against Tottenham and Leicester so far.

End product was the question mark over the winger's head long before Lage's arrival, but clearly the ex-Benfica boss sees something to believe there is more to come from him, and given he racked up nine assists and four goals in 2019/20, there is enough evidence that he can deliver.

"There's two situations with Adama," he says. "You must first talk about the finishing, but he is also creating a lot of chances, he's helping us defensively through his pressing, and don't forget the fouls the opponents commit against him.

"I'd heard the story about the oil he puts on his body, now I can see it every day. The player suffers a lot of fouls - we need to look at this. We need top players on the pitch, the Premier League is about top players, to compete against each other, so sometimes you need to protect them and he is one of them.

"The way he works, the way he wants to improve, his mentality, he will score goals for us."

It has not just been Traore struggling in front of goal so far. Wolves have adapted to their new attacking philosophy well, registering 42 shots in their opening two games, but none of them have hit the back of the net and they lost both matches 1-0.

Lage is frustrated on one hand, but reassured on the other. "I believe in one thing," he said. "You can have one chance, score it and win a game. But having more chances, we will score more goals."

The new manager and his players are working hard to rediscover the hardest skill in football - scoring goals. Among those aiding that improvement is new first-team coach Luis Nascimento, nicknamed 'The Captain' but better known to Lage as his younger brother. The 42-year-old was working at Rio Ave as assistant to Carvalhal - following in his sibling's footsteps - before getting the call to move to Molineux.

The moment the appointment is mentioned, Lage's face lights up. "After Benfica, I thought to myself I needed another guy next to me, and why not him?" he smiles. "We have the same pathway. I worked with Carlos, and after I moved on Carlos invited him to work with him too.

"I spent eight years with Benfica, he spent 14 years there. We've had the same influence, the same things. Sometimes what I'm thinking, he's thinking, and the other way round. It's good to have guys who can think the same way at the same time." 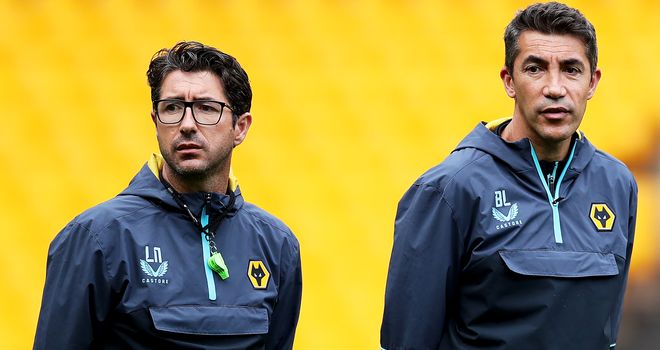 Aside from knowing one another inside out, working together offers another advantage. Despite being the younger brother and operating under Lage's management, Nascimento is more than happy to ignore the hierarchy if he has any issues with his methods or tactics - hence the nickname.

"He's different as a person from me. He's more straight. Sometimes we have time to relax, but he's like a big sergeant with us. For the players? No, between us," Lage laughs. "It's good to have that discipline. That's why we call him 'The Captain'."

Wolves' sternest test, on paper at least, of turning their philosophy into results will come at Molineux on Sunday when last season's runners-up Manchester United return to the West Midlands, hoping to break the Premier League record for away league games unbeaten.

The manager is steadfast in his beliefs. "After the last two performances, it's not going to be easy to play us," he says. The 45-year-old leaves no doubt, though, that it would be even harder with the "few" additions he would like to see added to his squad. "We have the targets, the positions, the profiles," he adds.

What happens next is largely out of his hands. But hopefully, Lage can remember this Deadline Day for the additions he makes to his own squad, rather than watching other clubs add to theirs.