Who is Arsenal target Gelson Martins? 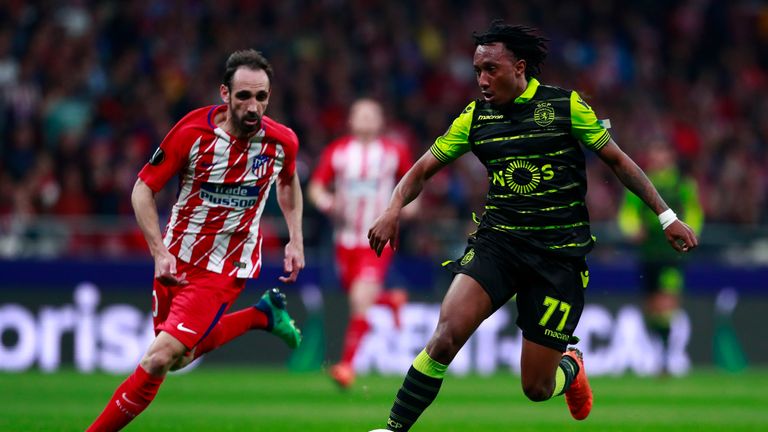 Arsenal are among a number of clubs interested in Sporting's Gelson Martins, according to Sky sources - but who is the Portugal winger? Martins has been linked to Liverpool as well

Martins was born Praia, Cape Verde, before moving to Portugal as a teenager.

Based in Lisbon, he started his youth career with Benfica before moving across the city to Sporting in 2010 where he his way through the ranks to earn promotion to the B team in 2014.

After just a year he was promoted to the first-team squad by new manager Jorge Jesus and his competitive debut soon followed, coming on in injury time during his side's 1-0 win over Benfica in the Portuguese Super Cup.

Martins then made his first Primeira Liga appearance on August 14, 2015, coming on late again in a 2-1 success against newly promoted Tondela. Martins made his first Primeira Liga appearance in 2015

Martin's breakthrough season came during the 2015/16. Competing for a regular starting spot under Jesus, he played 42 games in all competitions, scoring seven goals and producing four assists.

However, it was the following season where he really rose to prominence. As a regular starter, he scored six goals and produced nine assists - the most in the Primeira Liga.

His real breakthrough night came against Real Madrid in the Champions League. Sporting may have lost 2-1 on the night at the Bernabeu but Martins shone for the visitors, terrorising Real's defence with his pace and trickery. It was a performance that is thought to have impressed his fellow countryman Cristiano Ronaldo, who then reportedly urged Real Madrid to sign the winger.

Last season he improved again, scoring 13 goals and providing 13 assists in 52 games season in all competitions. His performances saw him named in the Europa League squad of the season by UEFA after helping Sporting reach the quarter-finals. Martins has made 18 appearances for Portugal

Martins was a member of Portugal's squad for the 2014 UEFA European U19 Championship. He featured in every game as Portugal finished runners-up to Hungary.

He also featured at the 2015 FIFA U20 World Cup. He scored against Senegal in the Group Stage and New Zealand in the last 16 before Portugal suffered a quarter-final exit on penalties at the hands of Brazil Martins featured in the FIFA U20 World Cup

The 23-year-old received his first call-up to the senior team in September, 2016 for the World Cup qualifiers against Andorra and the Faroe Islands. He made his debut against the Faroe Islands, replacing Pepe for the final 18 minutes of the 6-0 win in Aveiro.

He has gone on to make 18 appearances for his country and has been selected by Fernando Santos for Portugal's World Cup squad.

This comparison may seem a little wide of the mark bearing in mind Ronaldo's superstar exploits in the game but Martins style of play is reminiscent of a young Cristiano. Martins' style has been compared to a young Cristiano Ronaldo

Martins has pace to burn and the skills to beat a man. He's a classic winger with excellent dribbling skills and he loves to beat his opposite man on the outside before getting a cross into the box.

While his main attributes shine through in attack, his defensive work has improved. He has featured as a right-back, having played out of position for both club and country at youth level.

"“He’s going to fail you a few times, but he’s already at a level that can give you very good things. From the kids I worked with at Benfica and Sporting, he is the most talented I felt. He is a player for very high levels."" Martins has scored 18 goals in 92 appearances for Sporting

Liverpool have also been linked with a move for the Portugal winger in the past, while Tottenham are the latest Premier League club to be mentioned as a potential destination.

In Europe, AC Milan are reportedly frontrunners alongside the Gunners for his signature, according to Corriere dello Sport.

Sporting Lisbon in crisis: What could it mean for Premier League clubs?

How much will he cost?

Martins was reportedly left unhappy when Arsenal had a £26m rejected by Sporting, according to reports in Portugal.

However, he could now be available on a free transfer because he is one of four Sporting Lisbon players who have moved to terminate their contracts.

Several members of the squad were attacked at the club's training ground last month and want to end their stay at the club, citing 'just cause'.