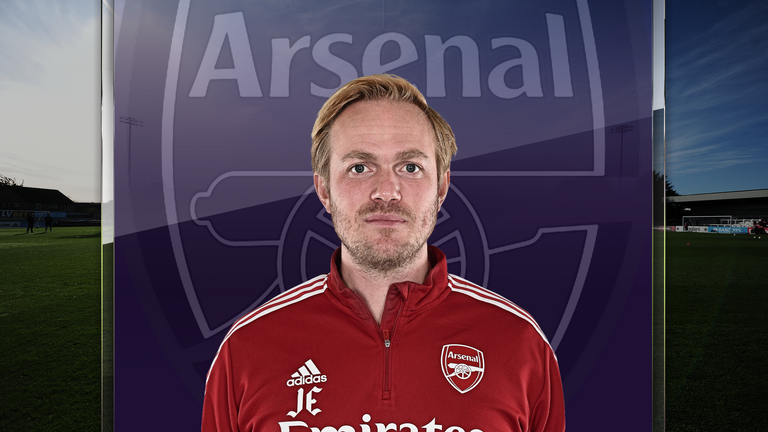 "There’s a big misconception in football that everyone is motivated just by trophies and results, and I think most of us are at some point, but when I talk to people and look at myself, that’s normally not the biggest motivator."

Make no mistake, Jonas Eidevall and his new Arsenal side want to win matches - and trophies. Heck, they racked up nine in a row prior to Tuesday night's 4-1 Champions League humbling by Barcelona in Spain. But there is no tactics board big enough to explain the Swedish head coach's Midas touch since his arrival in north London, and talk of a maiden WSL title could not be further from his mind.

At the 10th attempt, defeat in Catalunya was the first time Eidevall had tasted anything other than triumph since taking over at London Colney in June, a run which has taken them top of the WSL as well as demolishing local rivals Tottenham in the FA Cup.

Just as his players' motivations may extend beyond silverware, so does his own - to discover what makes his players tick and use it to get the best out of them. To make them feel valued as people as much as players, something Arsenal themselves have realised may have been lacking prior to his appointment in June.

It was around that time the Gunners vowed to invest more in their women's team after a disillusioning 2020/21 which played its part in previous coach Joe Montemurro walking away and opening up the role he now occupies, but no one could have expected how well the up-and-coming 38-year-old, previously untested outside of his native Sweden, would fare on these shores.

"I don't think it's a normal start, given the opposition we were playing," he tells Sky Sports with a wry smile. "We had great results, and like I said during the process, we had a lot of things to learn and develop, as we have in all of the nine games prior to the Barcelona game."

Eidevall stops short of namedropping the opposition Arsenal have faced in his baptism of fire. He does not need to; everyone is well aware of the marker his side laid down with an opening-day 3-2 win over reigning WSL champions Chelsea before thrashing Manchester City 5-0 still within the opening weeks of the campaign.

Even when pushed, he is determined not to get carried away with the significance of those results, perhaps chastened by the manner of that 4-1 Barcelona defeat in midweek which brought his side back to earth ahead of Sunday's showdown with Everton, live on Sky Sports Premier League from 2.30pm.

Looking aside from that defeat, Eidevall knows he has not sped up a long-term process to completion within 10 games. What he has done faster than anyone could have envisaged is identified his side's strengths and weaknesses, and looked to exploit the good parts, while making up for the bad parts.

As he later expands on, getting his new players onside, and up to speed, so quickly would not have been possible without the humanistic approach which won him acclaim at his previous side Rosengard, in his native Sweden's top flight, and helped them to reach last season's Champions League quarter-finals.

"They were very good results," he admits. "In some aspects they were statement wins, in some aspects not. It's so early in the process, we're not having performances where we cover everything.

"When we play against these teams, we had to pick out some key moments where we felt we could use our strengths against their weaknesses to get the best possible result. That has worked, and the players had a fantastic mentality.

"You want to grasp over everything at once when you come in, we've been very good at keeping things apart and introduce one concept at a time, so we can build a belief around it. Playing against Barcelona, that process has clearly had too little time to be good enough to play them, but up until then it has taken us to a good place.

"We can't think we have a golden formula on how to play against those teams. That was one way, we'll need to adapt our style, because they will adapt too."

Eidevall does not want to hang his hat on building towards the return leg against Barcelona in December, although he admits building towards being able to compete with arguably the best women's side in club football is a major motivation.

"They made us really uncomfortable," he says. "When you see them playing, you experience that, they sent us into a state of shock. We felt we were out of control in the game, and that's a feeling which is really hard to deal with.

"It's easy after, now, to see what we could've done differently, and it'll be a big motivation for us to move that way. That's tactical things, but also how alert we are going into a game, how we communicate, how we can change the momentum on the pitch.

"It's also a matter of everything which goes on off the pitch, too."

This is where Eidevall's methods really open up. It is as much about developing tactically as building a "sense of trust", as one of his former players put it, right from his first meeting with the squad at London Colney.

The Gunners' new boss is as much a motivator as he is a tactician. That approach did not give him much time to work his magic when he arrived in Hertfordshire only two months before the start of the current WSL season, so he set straight to work.

"I like to have a sit down with each member of staff and players, and talk to them a little bit about how they are as a person, when they have felt most motivated in their professional life, to get an idea of what drives and motivates them," he says.

"There are a lot who are motivated by the way they are playing and the way they are performing. They care a lot about that, and want to be experts in their field and really move the sport forward. You have to understand your athletes like that, so you create environments and challenges that are really motivating for them."

Perhaps the finest example of that has been attacking midfielder Kim Little. Unsurprisingly, Vivianne Miedema is the Gunners' top scorer so far, but the midfielder has matched her WSL tally this season and has seven goals in as many starts overall. "She's so committed," says Eidevall. "One of the things that really struck me when I spoke to her, one of the first times, when we talked about her goals, was how she talked about being consistent, and how much of an emphasis she put on that.

"For me, that was a perfect answer. The answer you want to hear from so many players. Being good in one game is one thing. But being able to deliver a consistent performance, game after game, it demands so much of you. The way you live your whole life, that's what it basically demands.

"People forget about that and just think about the highs, and tend to forget the lows. A player like Kim is consistent, and that's maybe the hardest thing to be as a football player.

"Too many times people treat football like track and field - jumping the furthest one time, running the fastest one time. Football's not like that, it's about performing a lot of actions all the time, and to be successful across a season, you need consistency, and to put a lot of emphasis on that, to understand how hard it is and value reaching that point. Kim understands that and is performing at that level, which is world-class."

Eidevall's long-term vision would not mean much without the opportunity to succeed, something which predecessor Montemurro could argue he lacked. The appointment of their new head coach was part of a commitment to develop the women's team infrastructure around Arsenal.

Of course, it is something he relishes. Who wouldn't? Not just for the financial backing, but also the chance to build a cohesive unit, one all singing off the same hymn sheet. That is one challenge he has not faced in his previous roles.

"It's obviously a strong signal when you talk to a club knowing they've been through a process, done a review, found they need to be better in some areas, and need to invest more," he says. "That's a perfect time to come in as a new coach, when people have the motivation to go somewhere else.

"It's a challenge, one I really embrace, a big reason why I like the challenge of working at Arsenal, that opportunity - but it's new to me as well, because I haven't done it before.

"Sometimes, when you're used to doing all the things yourself, it becomes a habit, and you don't become so good at communicating what you want through others, your messages. That's been amazing for me, getting the knowledge about that, thinking about it more, how can I be sure that all the staff are across the same message?

"So it doesn't matter who the player is talking to, how can we instill the same message, so the player knows this is what the staff and the squad believes in."