Caglar Soyuncu has had an impressive season for Leicester City

"I love playing for him," Caglar Soyuncu tells Sky Sports when asked about Leicester boss Brendan Rodgers. "I learn a lot from him, he's a very positive person and he pays a lot of attention to young players - which is great in my case."

The 24-year-old centre-back is one of the many success stories at Leicester this season, seizing the opportunity handed to him by Rodgers to fill the void left by Harry Maguire's sale to Manchester United at the heart of the Foxes' defence.

Only Liverpool have conceded fewer league goals than Leicester and it's been an excellent individual campaign, which has seen Soyuncu come to be considered one of the standout centre-backs in the country.

Sky Sports pundit Graeme Souness suggested he'd be "the centre-half they will all be after" in his recent Sunday Times column, while Manchester City midfielder Ilkay Gundogan has been quoted as saying only Virgil Van Dijk is better in the Premier League. "I agree I'm having a very good season. It's been great so far," says Soyuncu via video call. "Every time I play, I get better, I believe that. So to hear such good things from a player like Ilkay is very flattering. He's a great player himself."

However, Soyuncu's progress has only come through hard work. There have been one-to-one sessions with coach Kolo Toure and video analysis with Rodgers. "He's had a lot of influence on my game, how I've improved it," says Soyuncu. 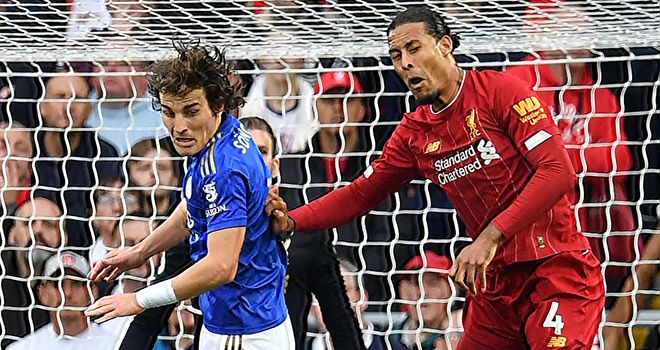 "There are so many good centre-backs playing in this league but I have to say Van Dijk is top of that list and where they [are] in the league and how he's done shows that."

The challenge for Soyuncu and Leicester is to make sure that hard work doesn't go to waste during what has so far proved to be a difficult restart for the team.

They remain third, but draws with Watford and Brighton have seen their advantage over Chelsea trimmed to one point, while Wolves are just three points back in fifth place, having played a game more.

Speaking to Soyuncu the morning after Leicester's FA Cup quarter-final exit to Chelsea, there remains an assured confidence from him that they will soon be back on track, regardless of their struggles since the restart.

"We are a good enough team, we are motivated and we will be going forwards with these positive ideas."

"We are not that concerned about that at all [dropping out of top four]," he says. "We only played two games, we drew two. Yeah, it would have been better if we'd won them both but we are where we are.

"We are going to do our best to play better and I believe we will do. We are a good enough team, we are motivated and we will be going forwards with these positive ideas."

To get back to winning ways at Everton on Wednesday - live on Sky Sports - Leicester will need to find more incision on the front foot. They have missed the cutting edge and attacking thrust they showed so emphatically when they thrashed Aston Villa 4-0 in the final Premier League game before the shutdown.

According to Opta, they have managed to create just one clear-cut chance across their two Premier League games with relegation-threatened Watford and Brighton, while Rodgers called on his team to "show more conviction" in attacking areas after Sunday's 1-0 FA Cup loss to Chelsea.

Soyuncu saw a late header fortuitously blocked by Cesar Azpilicueta in that tie, having steered another headed effort narrowly wide in the goalless draw with Brighton a few days earlier. The attacking onus shouldn't be on him, of course, but he says the return to action - in difficult circumstances - has been a challenge for all clubs.

"As defenders, when we go forwards, we try our best to help our forwards and score a goal," Soyuncu says.

"In the last two games, I've found myself in the box with some opportunities. Yes, that header was blocked unfortunately but I look forward to doing my best in the next game. All of us, all the boys and the management are upset we got beaten [on Sunday].

"But to come back after lockdown, after such a long period of break, it's not been easy. It's not easy for any teams at the moment.

"Everyone is finding it quite tough. Especially playing in a dangerous environment because of this situation, because of the pandemic. Football is not everything. We are human beings as well and we have our worries. For example, health is important.

"We've still got seven games to play and I'm sure we'll score many goals." That concern is of course reflected in the empty stadiums football is being played in right now.

Leicester were without their loud home support in those final stages against Chelsea when they were pushing for an equaliser and Soyuncu says the absence of fans really is felt by players.

"It's a strange feeling, normally you would hear them cheer us on which motivates you to play better," he says. "It's something I'm not used to. I don't think any of my team-mates are used to this - young ones, old ones - we've never experienced anything like this ever before.

There is urgency for Leicester to get back to winning ways and protect what they've fought for this season. But for Soyuncu, there is also a confidence they'll do just that.