In an exclusive interview with Sky Sports, Danny Welbeck opens up on his injury ordeal and Watford’s massive week ahead. Watch Watford vs Manchester City live on Sky Sports Premier League and Sky Sports Main Event from 5.30pm on Tuesday; Kick-off 6pm 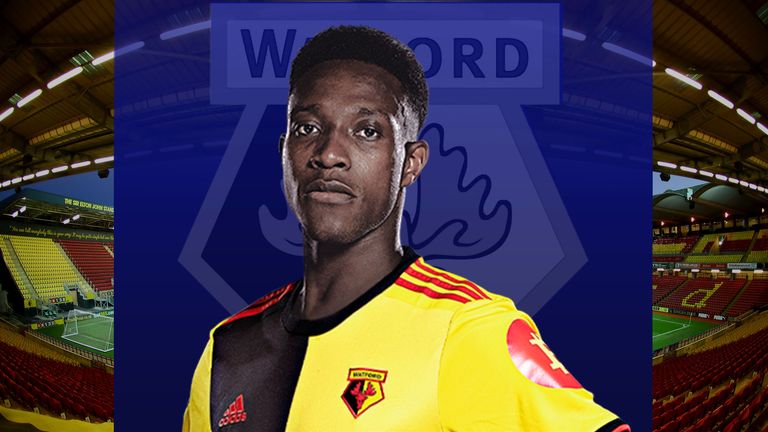 "It has not been the ideal preparation," Danny Welbeck tells Sky Sports. That feels like an understatement. Watford's decision to part company with Nigel Pearson on the eve of the biggest week of their season has put the glare of the national spotlight on the club.

Welbeck found out about the decision when the owners called a meeting to explain the situation on Sunday. It has been a hectic time. 24 hours on, he instinctively describes Pearson as the manager before quickly correcting himself. But he soon goes on to stress that there are no excuses for the team with their Premier League status on the line.

"As professionals, we have to deal with whatever comes our way and we have got to prepare for the game ahead however difficult that may be. It is the owner's decision and that is final. We cannot let it derail us going into these two massive games in this last week."

The fixture list has not been kind. Watford host Manchester City at Vicarage Road on Tuesday before travelling to face Arsenal on the final day. "We have got to come together as one," he says. "We will need leaders all around the pitch and all around the club."

Watford might well need a favour too given that a win for Aston Villa or Bournemouth in the coming days will be enough to move them level on points in the scrap to stay up. But a point against City or Arsenal would see off the Cherries and leave Villa with little margin for error.

Welbeck knows both clubs well. He was a Premier League winner in Manchester with United before spending five seasons at Arsenal, winning the FA Cup before his time there ended in unfortunate circumstances. His final appearance for the Gunners proved to be the Europa League game against Sporting Lisbon in November 2018. He broke his ankle that night. Welbeck suffered a serious ankle injury for Arsenal in November 2018

Perhaps it is worth recalling Welbeck's status at the time. Just eight weeks prior to the injury, he had started for England in a Wembley win over Switzerland. He was part of Gareth Southgate's squad that reached the semi-final of the World Cup earlier that summer.

Indeed, Welbeck went to Russia as the top England goalscorer in the squad - it was only during the tournament itself that captain Harry Kane overtook his international tally.

The ankle injury not only put his England ambitions on hold and ended his Arsenal career but it brought challenges both physical and mental. Welbeck makes no secret of that.

"You go through a load of emotions. There are times when you are there sat in your hospital bed and you are crying."

"You go through a load of emotions," he explains. "There are times when you are there sat in your hospital bed and you are crying. You are just overthinking things."

But then comes the period of acceptance and the long road back.

"Once you have had the surgery and your head is straight, you know what has happened, it is behind you and you have got to look forward. You try to build from where you are that day. Every single day there are steps to overcome. You just have to come through them and you find that you are getting better and better and feeling in a better state of mind."

Welbeck remains grateful for the help he received from the Arsenal medical staff as well as the ongoing advice at Watford. But the biggest support came from closer to home.

"I think the most important thing for me was having the family around me," he says.

"That was massive, keeping that positive energy up and just making sure that you are in the right head space and good to go again. It was a difficult injury to get over but now I am feeling fitter and stronger. This is the best that I have felt since having the ankle injury."

Circumstances have prevented Welbeck from building much momentum since joining Watford on a free transfer in August. He was making only his third Premier League start for the club in October when he suffered a hamstring injury early on against Tottenham.

He was out for four months after that.

Upon feeling his way back to full fitness with a series of substitute appearances earlier this year, the coronavirus crisis curtailed his progress once more.

At least Welbeck has become accustomed to coping with his frustrations.

"There are things that you can do at home to keep yourself in the best possible physical and mental state. I'd had little glimpses of that before lockdown. I'd had injuries before where I was not able to leave the house so there were still things I could work on to help me.

"It is not just physical stuff. You can also look at the mental side of things.

"There are football games on TV, you can watch different players who are playing in your position, you can watch your own clips to see what you can improve on. There are little apps that can help you, people who you can talk to. I think there are so many extra percentages you can gain and if you can get that extra one percent it is always going to be a help."

A cathartic moment only spoiled by the near silence that greeted it.

"It would have been a bit better if there were fans in the stadium," says Welbeck with a smile. "You would get to feel that adrenaline a little bit more.

"I hope that there will be many more of those moments to come."

There is no time like the present and a goal of any description would be welcome against Manchester City or Arsenal this coming week. What is certain is that Watford will need to improve on their showing against West Ham in the 3-1 defeat that ended Pearson's reign.

Welbeck, now 29, remains optimistic. He has had to learn to accept the upheaval. His last 25 Premier League appearances have come under the management of Arsene Wenger, Unai Emery, Javi Gracia, Quique Sanchez Flores and Pearson. Now is just a time to focus.

"We know that we were not good enough so we have to set a better standard than we did in the previous game," he adds. "We have got to put that behind us now. We cannot let it derail us, our thinking and our focus because we know it is such an important week. Not just for us and the team but for the whole club. It is a massive week."