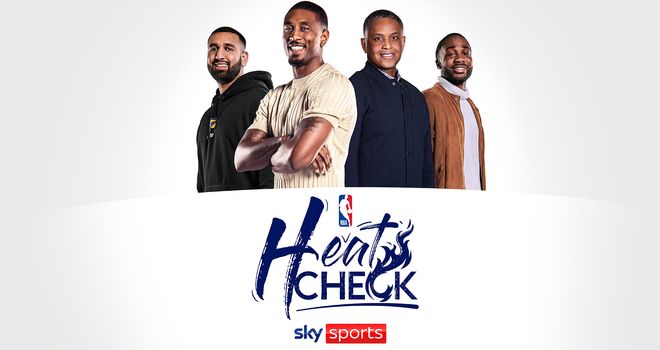 Host Jaydee Dyer is joined by three-time NBA champion BJ Armstrong and Sky Sports analyst Mo Mooncey to chop up the latest news and storylines from around the league.

Another week of Hot or Not sees the team debate whether or not Klay Thompson is still a crucial piece for the Golden State Warriors as he continues to work towards his long-awaited return to action.

Having spent time assessing the selections of Heatcheck guests, it's then finally time for BJ to share the five players he would start on court in the Dream Team segment of the show.

This week's Primetime Preview sees the guys cast their predictions ahead of the Minnesota Timberwolves' clash with the Philadelphia 76ers, as well as the New Orleans Pelicans' visit to the Utah Jazz and Sunday's clash between the Warriors and Los Angeles Clippers.

As part of the NBA 75 Euro Vote, we also take a look at the all-time NBA Dynasty, with Jaydee's suggestion it's the 95-98 Three-peat Bulls being met by some pushback. You can vote for your favourite right here: https://on.nba.com/eurovote1.

All that and plenty more on the latest episode of Heatcheck.