US Open: Where and when to watch the action from The Country Club live on Sky Sports Golf

Round-the-clock coverage from Brookline is live on Sky Sports this week, with over 40 hours of live action from the four tournament days; watch the US Open live on Thursday from 1pm on Sky Sports Golf 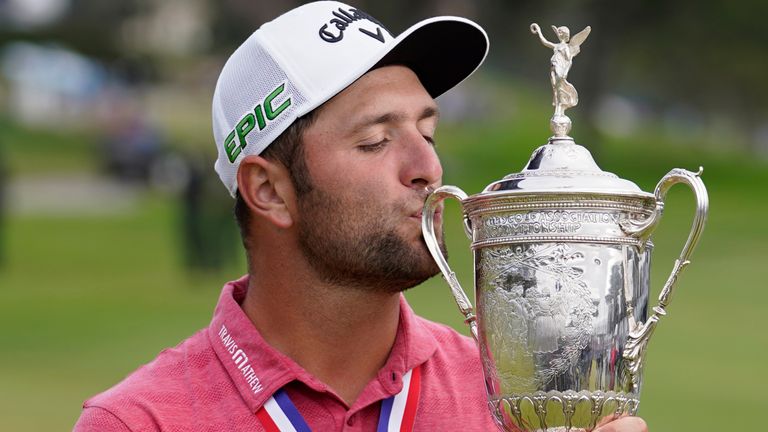 The men's major season continues this week at the US Open, with extended coverage from The Country Club in Brookline exclusively live on Sky Sports.

Jon Rahm returns as defending champion after earning his maiden major victory in last year's contest at Torrey Pines, while world No 1 Scottie Scheffler will be aiming to build on a dominant start to 2022 that has seen him win four times on the PGA Tour.

Rory McIlroy arrives off the back of an impressive title defence at the RBC Canadian Open, with the former world No 1 looking to become the first player to win a PGA Tour event and a major in successive weeks since he managed it himself in 2014.

Justin Thomas, who was third in Toronto, is targeting further major success, having won the PGA Championship for the second time last month after a brilliant final-round comeback, with reigning FedExCup champion Patrick Cantlay and Australia's Cameron Smith among those chasing a maiden major victory.

Reigning Open champion Collin Morikawa is among the favourites to win in Boston, while many of the field will have previous experience of playing the course earlier in their careers when it hosted the 2013 US Amateur - won by England's Matt Fitzpatrick.

Tiger Woods confirmed last week that he will not be playing. The 46-year-old had to withdraw from the US PGA Championship in May after three rounds and does not feel ready for the third major of the year.

Phil Mickelson, who is once again looking to complete a career Grand Slam, returned from his golfing sabbatical to play in last week's LIV International Series opener and, despite his PGA Tour ban, he is free to play in the majors at present alongside the likes of Dustin Johnson, Kevin Na and Sergio Garcia.

The iconic venue hosts the event for the first time since Curtis Strange's victory over Sir Nick Faldo in 1988, with the course also the location of Team USA's dramatic victory in the 1999 Ryder Cup.

Sky Sports is once again the home of the US Open, with over 40 hours of live coverage from the four tournament days and a host of extra tournament programming throughout the week. Coverage begins from 1pm over the first two rounds and 4pm on Saturday, with the action getting under way from 2pm on the final day.

There will also be daily highlights on Sky Sports Golf, as well as official films from previous PGA Championships, while Sky Sports News offers live updates and in-round highlights as the tournament continues.

A live rolling text commentary will be hosted on skysports.com and Sky Sports' mobile apps, where daily reports, video highlights and features will also be available.

Who will win the US Open? Watch live from June 16-19 on Sky Sports Golf!