Canadian Grand Prix: When is the race in Montreal, live on Sky Sports?

The ninth round of this year's championship takes place at the Circuit Gilles Villeneuve; Max Verstappen starts from pole position, with Fernando Alonso also on the front row; coverage of the race is live on Sky Sports F1 from 5.30pm, with lights out of 7pm 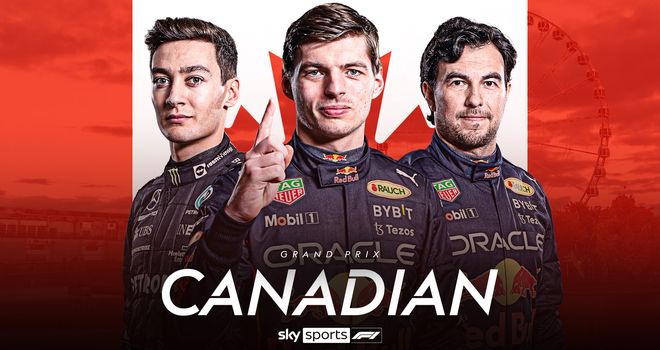 All the details for how you can watch the Canadian Grand Prix, live on Sky Sports.

The qualifying session for Sunday's race at the Circuit Gilles Villeneuve was one of the most eventful of the season thanks to the wet conditions.

Max Verstappen took pole position after his Red Bull team-mate Sergio Perez crashed out. Fernando Alonso then produced a stunning performance to snatch second on the grid for Alpine.

Carlos Sainz was third ahead of Lewis Hamilton, who produced a season's best qualifying performance to secure P4.

Charles Leclerc will start the race from the back row of the grid after taking a penalty for a new engine.

Haas excelled in the wet conditions as Kevin Magnussen came fifth, a place ahead of team-mate Mick Schumacher, who will hope to back up the best qualifying performance of his career with his first points in F1.

All of the build-up will be live from 5.30pm on Sky Sports F1, with lights out at 7pm. The Chequered Flag and Ted's Notebook will follow after to continue your weekend.

All the action from Montreal is live on the channel and as always, you can also follow the action online and via the Sky Sports App.