Dutch Grand Prix: When to watch the race on Sky Sports

Watch the Dutch GP live on Sky Sports F1 as a spectacular European triple-header continues at Zandvoort with Max Verstappen on pole at his home race; watch Sunday's race live at 2pm on Sky Sports F1, with build-up from 12.30pm 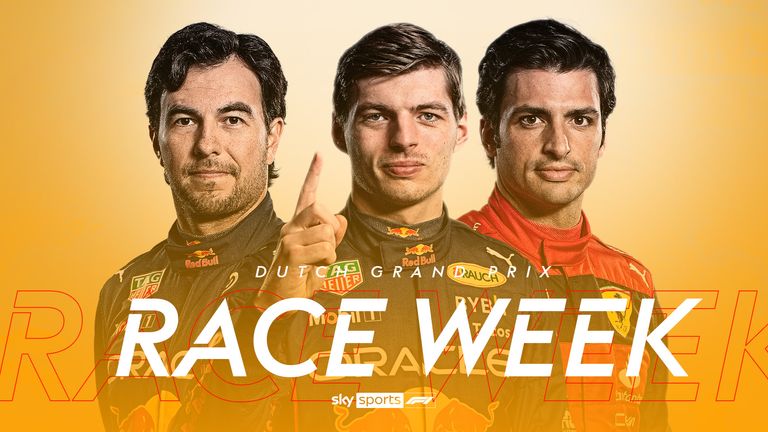 Formula 1's spectacular European triple-header continues this weekend - and you can watch all the action live on Sky Sports F1 as Max Verstappen makes his homecoming as world champion at the Dutch Grand Prix.

Verstappen continued his impeccable form with his ninth victory in 14 races this season as F1 resumed after its four-week summer break at the Belgian GP.

The Dutchman will now race at his home Grand Prix as a world champion for the first time, with masses of fans dressed in orange expected to greet him at Zandvoort.

Verstappen will start on pole after edging out Ferrari duo Charles Leclerc and Carlos Sainz in qualifying, while Lewis Hamilton is hopeful of mounting a challenge for his first victory of the season from fourth.

Sky Sports F1 is your home for the whole weekend, from the drivers' press conference on Thursday right through to Friday's opening practice sessions, Saturday's qualifying and Sunday's showpiece race.

The key times are:

Ferrari are hoping to bounce back from a disappointing weekend at Spa, with Leclerc looking to reduce Verstappen's 98-point lead over him in the world championship.

Hamilton arrived in the Netherlands with a point to prove, after a first-lap crash with Fernando Alonso - that the Brit later accepted responsibility for - saw him retire for the first time this season.

Alongside his Mercedes' team-mate George Russell, Hamilton has shown good speed all weekend in Zandvoort, and may have been on the front row if it weren't for Sergio Perez's final-corner crashing bringing out yellow flags.

As well as watching the action on Sky Sports F1, you can watch it all on the move via Sky Go or the Sky Sports App. There will also be regular updates on Sky Sports digital platforms, and Sky Sports News.